It’s semi final 2 and, really, isn’t everyone tuning in just to see one team go down in flames? Still, stranger things have happened. Anna and Jordan aren’t used to the pressure of Kitchen HQ.
Let’s play Lauren bingo. Comment “bingo” once you hear her say any of these phrases:
Amazeballs
Two fiddy Kay
Totes
We’re not going down without a fight
We got this
Anything in an accent
Bonus points if Carmine says “youse”

Eastern states have the advantage with this one, but play along anyway. Losers can just drink the Haterade.

Here we go! Who would you like to see win tonight? #AnnaJordan vs #CarmineLauren pic.twitter.com/4lo8JwufPt

It’s only a minute in and already she’s said “two fiddy kay”. BINGO! Bit sad Manu is not in purple velvet – perhaps they’re saving it for the grand final.
We start with speeches about how Carmine (gosh, he looks tired) and Lauren (who always looks fresh) are the fighters and Anna and Jordan are the frontrunners but can they handle the heat blah blah.
The menus
Lauren and Carmine
Entree: Seared scallops with pea cream and speck
Main: Sous vide chicken with smoked potato puree and brussels sprouts
Dessert: Grilled peach with yoghurt mousse and peach sorbet

Anna and Jordan
Entree: Lightly poached oysters with fennel and apple
Main: Chilli angel hair pasta with crab and pippies
Dessert: Cannoli with orange and mascarpone ice cream
Both menus sounds tasty. Anna and Jordan’s have more that could go wrong and the dishes need more technical skill than Lauren and Carmine’s menu. There’s a lot of work in making cannoli shells. 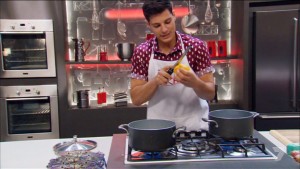 Finally – back in a nice shirt after a few shockers.

Everyone’s multi-tasking like mad and Lauren is “all good in the hood”. BINGO! Jordan’s oyster cream looks unusual – is this going to work? Anna is frying her cannoli shells now but Jordan is worried she hasn’t started her pasta dough for main yet. Surely they had a plan beforehand of what to do when? Is Anna just ignoring it?
To their credit Lauren and Carmine have planned every move they make – Carmine can’t take a breath without her permission. And it’s got them through a lot of sudden death cook offs.

In the ad break we learn House Rules starts Wednesday 7.30pm, so they’re getting the jump on MasterChef. 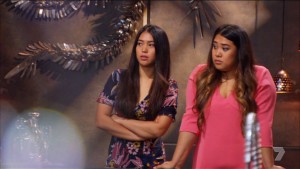 How gorgeous do Tasia and Gracia look on the sidelines.

Anna finally listens to Jordan and makes her past dough and is hilarious, referring to the dough as “she”.
Time to plate up and both dishes look good – Carmine and Lauren have obviously been studying plating techniques as the scallops look so much prettier than their usual dishes.
Time to chew

The oysters actually looked much more appetising than in this official MKR pic.

Liz likes the vibrancy of the scallops and says it’s a classic dish. Colin sums it up: “It’s good cooking, it’s got flavour, but I think it’s safe.” Guy likes the flavour of the pea cream – must have been that packet stock Lauren used.
The judges think Jordan’s oyster creation is an “interesting”-looking dish – interesting because they are not sure what else to say. Pete tastes the juice and puckers his lips and shakes his head. Uh oh. Colin is eating with his eyes shut. 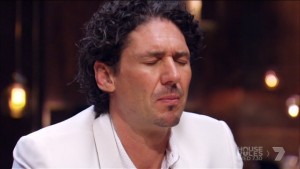 Is Fass blinded by the whiteness of his own jacket?

Liz gets a bit of oyster shell – disaster. Karen and Fass like the creativity of the dish but it hasn’t quite worked. Liz finds the oyster cream “slightly unpleasant” but the shell was the final straw. Manu likes most of the elements but the oyster cream is too “full on”.
So this round goes to Carmine and Lauren.

Main course round
L & C are only just starting their sorbet – hope it sets in time.
Over at the other kitchen Jordan is naming all the blue swimmer crabs he’s dismembering. The Sisters, on the sidelines, are worried. They’re doing angel hair pasta which, as Jordan says, is tricky as the finer the pasta, the more chance of it clumping.
Carmine is showing off a new skill he’s learnt: smoking potatoes. They bicker a little over whether they are smoked enough. Guess the judges will tell us who’s right.
They’s sous vided the chicken, which is smart as they know it will be perfect. Chicken is a little boring, though, considering the other team is confiting crab legs. I don’t order it when I go out for a fancy meal as it’s such an everyday protein at home. But then, as Lauren says: “This ain’t no Plain Jane chicken.” BINGO!
Jordan is starting to get flustered and it’s hard to watch.
Lauren is letting her jus boil furiously as she asks Carmine: “Where you at?” He deadpans: “I’m on the right hand side of the kitchen at the moment.” Good one, Carmine. So the dreadful accent comes out: “You know what I mean, boy!” BINGO.
Both teams are rushing. Carmine’s forgotten the brussels sprouts but the other team is much more disorganised. Jordan’s pasta is clumping a bit and the Sisters say the plating looks inconsistent. Even Manu – who is dead keen on trying their seafood sauce – is worried for them.
Plating done, Jordan and Anna look deflated, saying it looks worse than what they make at home.

The judges prepare to taste the chook and admire the pour of the soz. Karen notes it’s another classic, simple but well done. Guy thinks it’s not simple at all and he likes the soz. Fass thinks there is too much potato on the plate and Manu rates the jus as the best of the comp. The brussels sprouts were inconsistently cooked.
Karen loves the flavour of the pasta dish but notes she didn’t get a cherry tomato, whereas another plate had five. Fass would be happy to eat it while out for a meal but is not sure if it’s semi final worthy. Manu says the dish reflects the rushed finish.

Dessert time
Carmine fills his ramekins with peach sorbet and in his flustered state accidentally drops the churner container in the bin. Luckily they’d plated already. 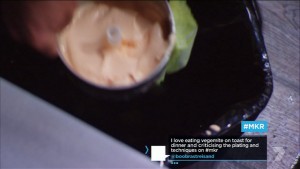 Anyone for peach sorbet with cabbage leaf?

On the sidelines, the Sisters are salivating over the look of Anna and Jordan’s cannoli, but note the praline is too warm for blitzing, so it’s not crunchy. Anna goes ahead even though it’s so warm she can stretch it in her hands but luckily Jordan tastes it and refuses to put it on the plate. They decide to try a ganache instead.
On the other side L & C are rushing and trying to put cold yoghurt mousse on to a hot crumb. Just put it on the other side, Lauren!
Lauren’s dessert is certainly more modern but the yoghurt and sorbet look runny and the cannoli is just begging to be chomped into.

Fass says peaches “sing of summer” and the yoghurt cuts through the sweetness of the mousse. Karen thinks they use simple ingredients well.
Guy says cannoli takes him back to his childhood and it’s “refined”. Karen says the pastry is textbook perfect. Manu loves the ice cream and he likes this dish more than the entree and main.

Scoring
C&L
Karen is full of praise for their “celebration of the produce”. Ditto Guy. Fass says their chook was “a lesson how to cook chicken”. Pete knocks the sprouts but Manu loves the jus.
Guy 8, Liz 8, Karen 7 (seems low given her raving), Fass 7, Pete 8, Manu 8. Total 46/60

Looks like Anna and Jordan can only win if they get props for technical difficulty – and if the magnificent cannoli wipes out the memory of entree.
A&J
Fass tells them a better way to balance their oysters (he’s always good with constructive criticism) but Liz relives the horror of biting on oyster shell. 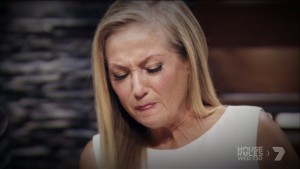 The judges rave about the flavour of the pasta but note the presentation was haphazard. More positive cannoli comments. Manu really “anchoyed it”.
Guy 7, Fass 6 (when Jordan see this he knows they are going home) 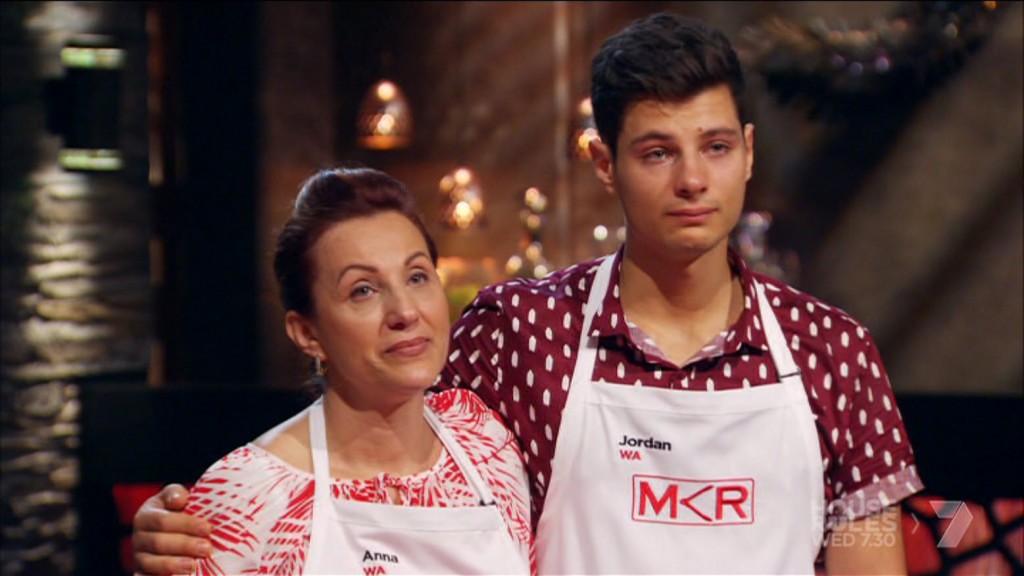 Defeat is in their eyes.

Jordan is devastated but Anna is cool as a cucumber. A concerned Manu asks: “Are you all right, buddy?” So all that practise at the bottom paid off for C&L when the pressure was on, plus they chose smart dishes they could complete within the timeframe. 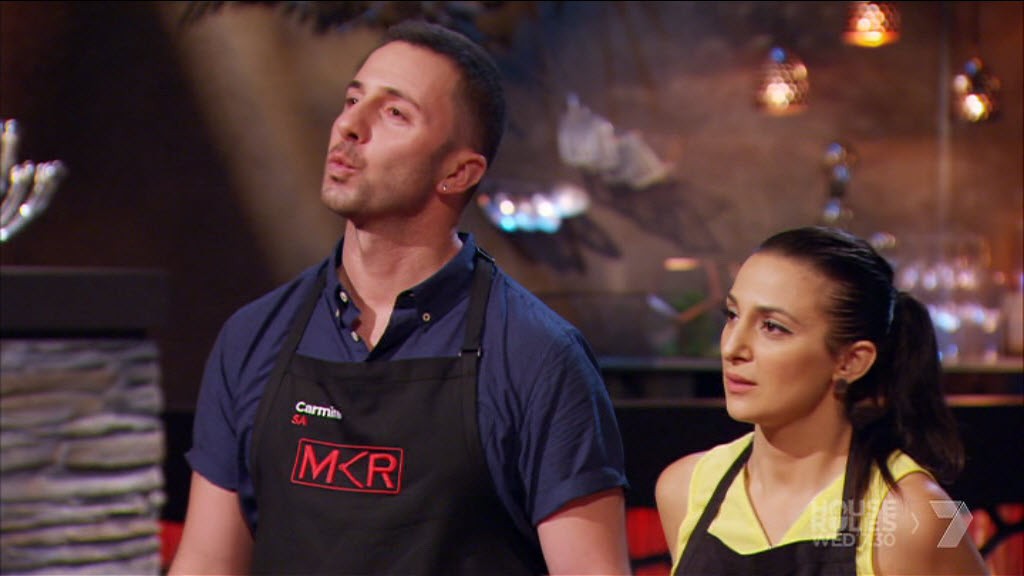 Who’d have thunk it.

Pete gives a nice speech about the great food Anna and Jordan have produced and how they’ve inspired families to cook with their kids. Jordan may be crying now but he’ll fall on his feet. Surely a media career beckons – he just needs to find the right gig.
I wish the judges would give separate score for technical difficulty and creativity as well, so teams who push themselves can get a scoring boost.

See you for the grand final, 7.30pm tomorrow. 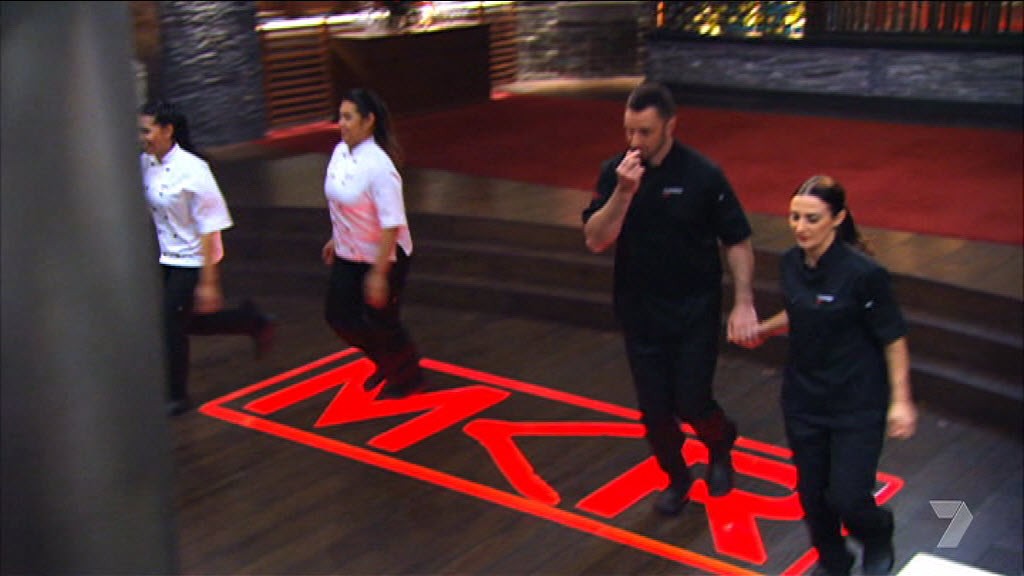 Who’ll be watching House Rules on Wed? And MasterChef on Sunday?