As we know, Reynold is back in the MasterChef kitchen tonight, but this time he doesn’t have to worry he’ll be asked to do something savoury. He gets to set the challenge for the pressure test for the bottom three from last night’s invention test.
Here’s a link to his dessert bar, which is about to get even busier http://www.koidessertbar.com.au/ 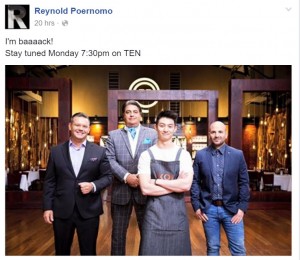 The three contestants in the firing line are Chloe, Karmen and Olivia.

Apparently running on a treadmill, reading love letters and standing on your head are just what you need to prep you for a cooking comp. I’d just be reading cookbooks, but that doesn’t make for riveting TV.
They’re ready for the pressure test from Reynold – who gets a total fangirl welcome from the contestants – which is to create “Moss”.

It’s a dried fennel frond, apple blossom pearl, pistachio sponge, yoghurt foam, apple sorbet, and a sphere of pistachio mousse coated in matcha with a caramel gel interior.
George asks dessert enthusiast Karmen: “What’s it like standing so close to Reynold?” Reynold laughs like a nervous 15-year-old boy and tells George: “That’s not necessary.” Ah, Reynold – you’re just a dork who likes to cook – I love it. Yeah, George – just because they’re Aussies of Asian descent who like sweets doesn’t mean they’ll have the hots for each other.
Oops – forgot to do a “what’s Matt wearing?” update: 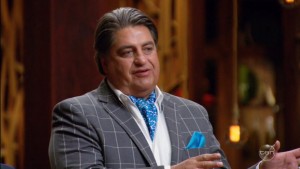 Tamer than his usual ensembles but we saw this cravat on May 5. C’mon, wardrobe – mix it up!

Karmen says she is familiar with most of the techniques used in the recipe and she’s off to a quick start. Olivia is also doing well and George and Reynold are impressed, just advising her to keep her bench clean. Karmen is having trouble with her pistachio mousse and Chloe manages to overtake her, so she starts again. And again it seizes up. What’s going on – is she not reading the recipe properly? She decides to keep it and just add cream and it seems to work. Hope her sphere sets Ok.
Restaurant manager Olivia seems to be whipping through each task – hope she doesn’t come a cropper. At least with her job she’d be used to multitasking.
Karmen is catching up so the producers send Reynold over to distract her with questions that will enable to mention how her parents think she should stick with surveying.
Reynold advises everyone to make spare spheres but Chloe has just made one sphere – aargh – so risky. Yes, she’s pushed for time, but without a sphere there isn’t a dish. Better to spend time doing a second sphere and leave off something like the yoghurt foam if you have to.
It’s just over a week into the competition and, finally, microwave siphon sponges make an appearance. Poor Olivia, who’s been doing so well up until now, stuffs up her sponge because she second guesses herself, and then she leaves the gelatine out of her foam. This is what happens when George comes over to tell you how far ahead of the others you are – the Calombaris jinx.
Chloe moves on to her white chocolate cremeux, which I think is the second cremeux of the comp, following Charlie’s ginger chocolate version when he was in the bottom three. At least it’s not ABPC (another bloody panna cotta).
Karmen is having cremeux trouble so she decides to leave it off the plate so she can concentrate on other elements. Olivia is in a total flap and it doesn’t look good for her.
The contestants have to make sure each element of the dish is in a specific place (fridge, freezer, bench etc) as they have 10 minutes to plate up when it’s their turn. But Olivia has forgotten her matcha sphere, and as she runs to get it she stacks it, just like Chloe the other night. What the heck are they polishing those MC floors with – olive oil? So, Olivia’s sphere is stuck in the freezer and probably won’t ooze when it’s cut.
Time to judge
Chloe lucked out in that her sole sphere looks good. She’s done a great job to get all those elements up and she seems to have a balanced outlook on life and a laidback temperament. Reynold likes the look of the sphere but the caramel inside is too pale. The sponge and mousse get the thumbs up.
Karmen is next to don the mad scientist goggles and play with liquid nitrogen to make her yoghurt snow. She’s devastated she missed the cremeux (or creme-ooh, as George calls it) but George gives her props for what she’s achieved. Her caramel centre looks better than Chloe’s but the plate is not as pretty. She gets ticks for a lot of her elements.
It’s Olivia’s turn and the siphon gun isn’t working, so she improvises. Olivia is totally going home, which is such a shame as she’s done a few delicious-looking savoury dishes, like this one: 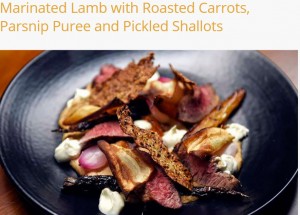 Please come to my house and cook this, Olivia.

As she predicted, her sphere is too frozen and her sponge is dense. Gaz does like the flavour of the mousse but Reynold says the caramel is too blond and her matcha coating is uneven.
The judges pretend she’s in with a shot but one missing element easily outweighs three poorly executed ones.
The announcement
The judges praise Chloe for her attitude and her dish. Olivia is going home but there’s no shame in bowing out on a dish that would have been a finale test in previous seasons. Can you imagine Poh or Julie having to create “Moss” back in their season? They would have failed miserably.
Where are they now?
Olivia is working full time in The Cook’s Garden (Google says it’s an English style pub in north Sydney – wonder if this is where she was working before?), heading up the pastry section. She hopes to launch a cooking program for high school and university students.
Tomorrow night
Nicolette, Con and Anastasia have to cook a dish using popcorn. Expect a tonne of popcorn parfaits.