It’s day 2 of My Kitchen Rules and it’s off to western Sydney to find out more about Social Media Influencer Betty (the one with the sleeve of tatts and the blind mum) and her BFF David. Please, please, please turn out to be awesome cooks of Asian food like last year’s winners and not just cast because you look cool. 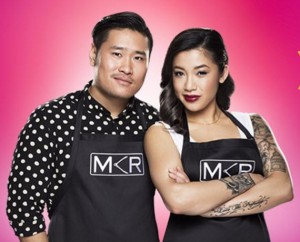 Betty’s family is from Laos; David’s were Vietnamese boat refugees. Betty likes to stand on chairs to Instagram her food, likes getting tatts and her mother is blind. Betty describes herself as a hustler. David is … present.

Entree is crispy pork belly with steamed bun and cucumber. It sounds like a bao – which is delicious. Why aren’t they calling them bao?
Main is barra in sweet and sour broth with rice and greens. They buy fillets, so they don’t have to spend time prepping the fish.
The MKR producers delight in showing the Asians having trouble parking in a tight spot. Nothing at all to do with them having a camera in their faces while driving a borrowed car.
Back home, the clock has started ticking and they have yet the decorate their marquee.
Finally, with only 90 minutes left on the clock, they start cooking in what looks to be an original 1970s brown kitchen with only a four-burner stove. A change from the usual flash kitchens on MKR.
Aha – David starts working on what he calls bao dough. So far David is the only one who’s been shown cooking.
The contestants arrive … yadda yadda … Last night’s cooks get to know their fellow contestants and Damo guesses that Brown Beard “wrestles bears”.

Back in the kitchen Betty has a few blue bandaids on but we didn’t see any drama. Here are the judges and Manu is wearing a white jacket. No, no, no, Manu – you don’t wear white to eat Asian food – how are you going to slurp it properly?

#MKR Judges, dashing as always. Time to get down to business. pic.twitter.com/wXWAyL8JPG

In the kitchen they are mucking around with the traditional shape of the buns … why oh why! Bao are delicious – don’t muck with them. They are happy, though, although they are way flatter than usual, and the pork looks amazing.
We’re killing time with the WA flirt and Brown Beard – just get to the food, please! They are using sauce from a bottle because that’s how their mums do it
(and yet it was ok to change the bao?). This will be trouble.

ENTREE IS SERVED
Pete says it’s delicious. Manu says the buns weren’t fluffy enough and we would like them to show technique by making the soz themselves.
The Villains are the only ones shown criticising the entree because, well, crispy pork belly.
The edit tries to make us dislike Tyson even more for knowing words like dashi – pretty basic stuff for a cooking comp. And: Amy bad. Amy no like kids.
Blonde Flirt may have to be renamed Hair Twister – unless it’s the same shot over and over.
Oh – there appears to be some cooking happening. The crispy fish skin looks yummy but they are having trouble with their crispy rice cakes. Did they not practise them? Or refrigerate them first? And while they faff with that the okra in the broth makes the liquid slimey. Ick.
They drain the broth, add more water and aromatics and pick out the okra so they can try to salvage the soup. Serving okra to non-okra eaters is risky.
The plated dishes look pretty good, although the broth bottles are massive. And then they pull out the selfie stick spontaneously, not at all because the producers told them to. At least it wasn’t a belfie.

MAIN IS SERVED
Manu gives a teary Betty a mock hard time about changing her mum’s dish. He and Pete liked the dish. Pete loves okra – yeah, that figures. The broth was too weak (due to their dramas).

Dessert is green tea cream doughnuts with chocolate glaze and matcha affogato. That’s a lot of green tea in one dish and not everyone likes matcha. They are worried Betty’s ice cream is too icy, but they are pouring a warm liquid over it anyway.
Girl Villain cements her Evil League of Evil Credentials by admitting: “I don’t love doughnuts.” Hey, at least she eats chocolate – remember Knee Socks Jess from last year?
The affogato looks like a shot of wheatgrass juice. Uh oh.

DESSERT IS SERVED
Manu does not like the affogato – it’s way too savoury. “It’s a smack in the head kind of flavour.” And the “arse-cream is not a great arse-cream”. Pete agrees. geez – Pete isn’t getting much of the edit so far.
This is one dessert where Brown Beard won’t be nicking everyone’s leftovers.

THE SCORES
Tanned Flirt and the Pale One: 7
Midwives: 7
Beardies: 5
Villains: 6
Damo and Caz: 5
Generous scoring, given dessert was inedible – they must be great company.
Total 30/50 and they’ve beaten the Tasweigans.
Judges
Entree: Manu 7 Pete 7
Main: Manu 7, Pete 7
Dessert: Manu 2. “I disliked this desert a great deal,” says Pete, giving them a 1.
Total 61 – one point behind Damo and Caz.

SO
Can you hurry up and get to the challenges already – these instant restaurants are taking forever and there’s weeks of them ahead.