How many of you watched Season 1 of Survivor (the Channel Ten one, that is?). Who would you like to see return for All Stars? Or who do you think Ten would want back? 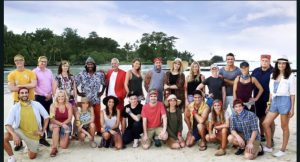 Bianca Anderson
Lied about being a PI. Not trusted early.

Evan Jones
Strangely decided to lie about being a drama teacher. Big fan of Survivor which was likely his downfall.

Peter Fiegehen
The guy in the colourful suit. Fiegs was unwell since he hit the beach but tribe refused to vote him out due to likeability and alliance implications. Had to quit.

Barry Lea
Dreadlocks. Well liked but annoyed everyone by picking names out of a hat. Unpredictability a liability.

Rohan MacLaren
Model; dropped idol clue to be found by another, not a fan of show

Andrew Torrens
Happy to play villain role to camera but it never really played out that way. Wore fedora.

Nick Iadanza
Adelaide’s own snake, hampered by trying to play a US Survivor game in a season full of non-fans and this not being trusted. Good at puzzles. Went on to host RHAP’s Australian Auevuvir coverage until birth of first child.

Jennah-Louise Salkeld
JL, got a purple edit despite others saying afterwards she was a good player

Sam Webb (brother of that MAFS guy with a neck as wide as his head). Not strategic

Matt Tarrant (takented magician). We waited for him to flip and it never happened. Wore Port Adelaide gear and black ripped jeans. Liked chicken nuggets. Is the butt of many jokes made by the official Australian Survivor twitter account and responds in kind.

Elena “El” Rowland part of mateship alliance. She and Lee later dated. Physically strong but had a purple edit