And it’s back to the beaches of the Brawns, Brains and Beauties for episode 2 of season 32.
Hopefully we’ll see no more of this critter tonight.

It’s night time and the Brawns are arriving back at their camp, after the tribal council which saw Darnell voted out (and just for the record, everyone of Survivor poos in the ocean – that wasn’t why he was voted it. It’s just that’s how we’ll now remember him). The Brawns try and convince hapless Alecia she had their support all along. She is rightly suss but mostly “really confused at this point”. Her tribemates have earmarked her for an easy elimination next time, it’s easy to see why with comments such as “We almost had an embryo and then it went out” in relation to making fire. Oh, Alecia. I really want you to blitz a puzzle and prove everyone wrong – especially tatts Jason, who refuses to call you by name – but it’s not likely.

Over at Beauty, gardener Tai is back looking for an idol near the dead trees he spotted last week. He glances up and spots a bright yellow package in a hole in another tree. It’s a clue! Sadly not of the variety we saw in Second Chances, which told contestants they had to snatch an idol in the midst of a challenge, leading to nailbiting scenes with the tenacious Kelley Wentworth and eventual winner Jeremy Collins.
No, this clue is simply that the idol is at the foot of the same tree. Um, world’s most boring clue, but I speak too soon – there’s actually another scroll saying Tai needs to use a tool he’s uncovered to reach for a key in another tree, then use it to unlock the box containing the idol. This is convoluted – bring back Second Chances-style idols!
Tai monkey man tries to shimmy his way up a coconut tree and he does well, but he’s not this guy. 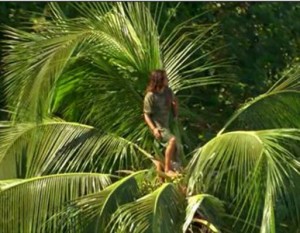 Me Ozzy, me half monkey but me never win Survivor.

Feet bleeding, Tai realises he needs to bolt before his tribe spots him and try another time. Could this lead to him teaming up with someone else so they can retrieve the idol together?

Over at Brains they are lighting a fire with kero won at the reward challenge. Debbie refuses to drink the boiled water – straight from the well is fine for her as she has a strong constitution. The others are more wary of microscopic parasites (wait till they hear what happened to Jen) and her know-it-all attitude is rubbing some the wrong way. Still, I’m-A-Doctor-Not-Obama comes across as a tool when he does a confessional claiming she’s a crazy cat lady. 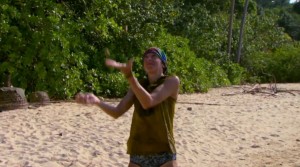 At Beauty, Caleb and Tai are making an unlikely pairing, with Tai being a protector of all living things and Caleb a country boy hunter type. But Caleb lets little Tai snuggle up for warmth and they tease each other like brothers – it’s fun to watch. Come on, Tai – ask Caleb to help you reach the idol.

The Brains aren’t happy because some of their kero leaked and their matches are wet. Ex-FBI hostage negotiator Joe somehow cops the blame for this because he’s old and he’s finding Lizzie a whiny know it all. He’s happy to drink the water as is. “Pathogens my butt,” he tells her – and I’m having Rudy flashbacks here. Did they not get a flint?
Off by herself, Lizzie is getting teary and feeling the effects of dehydration. Drink the water, Lizzie!

At Brawn they can’t make a fire and Jason is ridiculously sunburnt, even though I know they are given sunscreen. He’s philosophical, though: “I was in Iraq and Afghanistan, so I can live with this.” Alecia tries to redeem herself and spends hours trying to spark the flint while the big boys sleep. And she does it! Go, Alecia! Maybe Jason will stop calling you Blondie.

Come on in, guys – it’s challenge time. Jeff has the orange and white cap on again. It’s one of those elaborate carry a log through water, knock down a target deals.

Reward is fishing gear and a boat; runner up gets a smaller fishing kit.
Brains sit out full-on Debbie; Beauty some blonde named Julia.
Brain quickly fall behind in the log challenge and several times Aubry (who had the mini meltdown last week but then proved herself a puzzle champ) seems to be the only won dragging the 300-pound object through the water – the ice-cream entrepreneur is noticeably hands off, bringing up the rear. Several contestants take hard tumbles climbing through the wooden structure. Eventually, though, they are all pretty even at the end but Beauty takes the win and Brain comes second. Brawn will head back to tribal for the second week in a row and Alecia knows she’s in trouble. 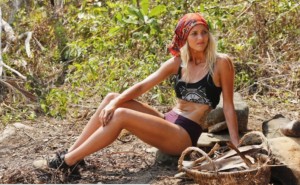 I’m in so much trouble.

She heads off into the trees to look for the idol and back at camp NBA player Scot and bounty hunter Jason love to badmouth her for being “dumb”. It’s over the top and contractor Buggsy Jen – who looks to have gotten beaten up in the challenge – is getting sick of it. She has a chat to Alecia about voting out one of the big boys via an all-girls’ alliance. Hmm, dunno if the bodybuilder will go for that but she hasn’t had any screen time today. Alecia is crazy enthusiastic and Jen tries to calm her down “Listen, you’re absent minded as [bleep] and you drive me crazy, but at the same time I also like you. And not only that, this game is also about big moves.”
However, Jason is getting ansty that Jen is chatting to Alecia. Jen starts having second thoughts about turning on her alliance with Scot, and her second thoughts about the all-girls’ alliance are giving Cydney second thoughts about Jen.

At tribal, that bug must have eaten some of Jen’s brain, because she is revealing way too much, lulled into complacency by Jeff. She tries to dig her way out but just makes it so much worse. Alecia doesn’t even have to fight to stay – Jen is doing all the work for her. Jeff is loving how this tribal is going, especially when Jen climbs up on her stump and pleads with her alliance to stay true. I’ve never seen anyone make a literal stump speech at tribal before.
It’s vote time and Jenny is gone. 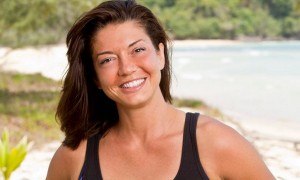 Bye, Jen – bet that tribal was tougher to watch than the bug incident.

Alecia delighted reaction has no doubt already been made into a gif. OMG – is Alecia going to make the team shake-up?

"Tonight’s Tribal Council is a dramatic example of how quickly the game can change" –@JeffProbst #Survivor pic.twitter.com/hXbsHgtBNO

Afterwards the votes are revealed and we see Jen and Scot voted for Alecia, the rest Jen.
I’m hoping that next week Brains or Beauty will lose so we can get to know another tribe better.
Now, let’s see what former players are saying on Twitter:

Nope. We were too busy strategizing. https://t.co/9flj7jWK4B

But Fishy is sticking up for his mate Lizzie:

Seriously though is there anybody who has ever camped ever who thinks its a good idea to drink unboiled and untreated water?

Omg somebody get bounty hunter some SPF 1000 ugh #Lobster

Caleb & Tai don't got nothing on Me and my boy Joaquin's Bromance ???? #Survivor #bashbros @Joaqsworld