The losing team from the Chinese New Year challenge must now cook a dish determined by lucky dip. With 75 minutes on the clock, the contestant with the least impressive dish will be eliminated.
We start with an oh-so-natural conversation of the contestants lying in their grown-up bunk beds, chatting about the challenge ahead.

Elusive Elena is getting a talking head – does that mean she’s going? Or she’ll shine. It’s her first time “in black”. Also in the firing line are Intense Matt, Teeny Top Knot Harry, Mimi, Swishy Pony Tail Zoe, Ranger Miles and captain Chloe. But Chloe has an immunity pin and, after choking out a few tears, wisely decides to play it. So everyone has a one in six chance of going home tonight.
They all have to lucky dip for an ingredient and a cuisine.

Who gets what
Elena: Pork and Spanish. Just use chorizo, Elena, and you’ll be right.
Miles: Fish and Japanese. The former resident of Japan is in heaven. I hope he does well.
Harry: Shellfish and Indian
Zoe: Fruit and American. So it’ll be a dessert then, which is her wheelhouse.
Mimi: Lamb and Thai. She’s freaking out for some reason. Not sure why. Lamb may not be a traditional Thai meat but there’s no reason she can’t do a curry, larb or a stirfry.
Intense Matt: Beef and Lebanese. He’ll be fine with that combo.

What are they cooking?
Zoe is making a pumpkin pie. What? Fruit? It’s okay – Zoe studied science at uni and says pumpkin is a fruit because it has seeds. Fair enough. I sense an argument with the judges looming. She’s making a maple bacon icecream to go with it.
Intense Matt is making braised beef shin on eggplant yoghurt with flatbread – please let someone cook a decent on this show for once, instead of thick cardboard.
Miles is filleting a massive salmon but his usually good knife skills are failing him under the pressure of expectations. Of course, George comes over to stare at him spookily while he’s stuffing up his filleting. “Your filleting scares me,” says George. Well, George, your table manners scare us, yeah? Miles hopes to serve the fish three ways with miso soup, tempura veg and a dipping sauce. Miles says he’s only learnt how to pickle and cure food since being in to MC house. So, is Miles going home because we just learnt about his growth?
Uh oh – Elena is getting back story about her art teaching. She’s making Spanish pork and rice with three textures of pork.
Topknot is cooking Indian prawn curry and seems confident. Mimi is finding it hard to come up with an idea still, so Gaz has to pretty much tell her to make a Thai beef dish but just use lamb. She’s doing a vermicelli salad.
With 40 minutes to go, Zoe hasn’t started her oastry. Gaz calls up to Heather (apparently now a pastry guru) on the gantry to ask how long it takes to prep pastry: “Over 60 minutes.” She should just do a biscuit butter crust instead, or a deconstructed crumb thing. But she ploughs ahead anyway.
Someone had to pull out the smoking gun and tonight it’s IM. At least he’s using it for his eggplant dip, which makes sense.
With 20 minutes to go Mimi is finally getting her act together. She deep fries a rice paper sheet to make it look puffy and awesome but she’s not confident about some of her ingredients.
Elena’s pork is out of the pressure cooker and looks super tender. The judges are worried Miles is doing too many elements – Matt has told him to plate it up as George would. Do you have giant tweezers and flowers at the ready, Miles?
Zoe’s pumpkin filling isn’t quite right. I’m surprised she’s stirred whipped cream through her puree instead of mascarpone or something similar.
IM is happy his beef shin is “lush” and Harry is busily frying prawn shells for garnish.
Miles is having trouble with his plating up and Brett is rightly worried he doesn’t have enough fish on there. Grab one of the dark plates, Miles – they’re more Japanesey. He’s placed a flower bang on top of each piece of fish. Oh, Miles …
Mimi’s salad looks rather pedestrian – as Nicolette says, where are the peanuts or fried shallots? Miles could be safe. 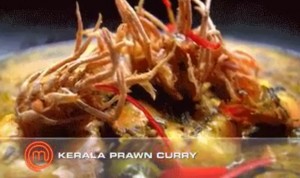 Harry’s Indian prawn curry: The judges reckon it looks good. [Mr Juz says he’d rather have butter chicken, but he has the tastebuds of a six-year-old.] It tastes as good as it looks and, as Harry would have known, they can’t go past a crispy prawn head.
Mimi’s Thai lamb salad: “I looked at you halfway through and thought you’d just lot the plot,” Gaz says comfortingly. The judges look super serious and she knows she is in big trouble. The lamb is cooked perfectly and it’s clean and fresh. “The overall sense is wet,” says Matt.
IM’s Lebanese beef shin with smoked eggplant yoghurt and flatbread: “It’s easily something I could serve out of my food truck,” he tells the camera. Gaz says he believes the food truck will happen: “I’ll be the first guy in the queue.” Nice to see supportive Gary come out to play. The judges love the smoked eggplant yoghurt and the crisp fennel flatbread – in fact, everything.
Zoe’s pumpkin tart with maple bacon ice cream: George gives her his serious face. Matt hopes it’s not too sweet. The tart looks blond on the bottom and “it’s a little clumsy” says Gaz. They love the ice cream and the bacon praline crumble. But the pumpkin texture is off.
Elena’s Spanish pork and rice: “I’m really proud of it,” she tells the judges. She tears up but comes across as genuine. Good to see Elusive Elena getting camera time. “It looks brilliant,” says Gaz. Matt loves the colour combo. Cue the dreadful crescendoing hold music, almost drowning out Gaz’s “Oh God.That is an assault on the palate.” And he means that in a good way. “This is goinng to be something I’ll never forget,” says George, adding she could win. Matt says it’s one of the best MC dishes he’s every eaten. Go, Elena!
Miles’s salmon with tempura veg: “Shouldn’t you have just concentrated on bringing us a beautiful salmon plate,” Matt probes an already uneasy Miles. “He likes to make to hard for himself,” says George. They agree he’s nailed the Japanese aspect of the brief. They like the tempura and dipping sauce – but the salmon is not cured enough. “But, is it a tasty dish – yes,” Matt says.
Matt says Miles, Zoe and Mimi are all in danger.

The judges’ verdict
Those with the tastiest dishes are called out first: IM, Harry and Elena.

Well done @elena_jo_duggan for one of the best dishes the Judges have tasted on #MasterChefAU! pic.twitter.com/1GwqVajszR

She starts crying when they say how much they loved her dish. Awww.
And Miles is going home. Mimi dodged a bullet there. Given I thought Miles was originally going home in week one, he’s done really well. He proved a great team captain in the Hellenic Club challenge and the show has probably given him the exposure he wanted.

Where is he now? Miles is developing a concept centred on the “Miles Pie Club”. He hopes to open a cafe in Clermont soon.

And, according to TV Week, he just became engaged to someone he knew decades ago. Miles engaged story

The promo for next week shows it’s the power apron week. This has always been a bit of an anticlimax in the past. At least Luke Nguyen appears on one episode to make reveal “a secret ingredient”.

New MasterChef poll is up – don’t forget to vote!