Over to Daisy (thanks!) 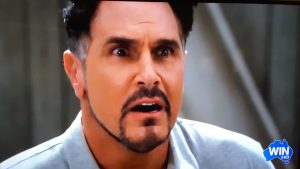 After a barely deserved break some of our B&B cast returned to our screens this week. We kicked off the year with the feud between Liam and Bill, with Liam using Sally as an excuse to challenge his dad…or has he been using his fleeting power at Spencer to puff out his chest and win the flaming redhead damsel who enjoys being saved by millionaires. Sally and Liam make a great couple. She likes being saved by men with fat wallets and Liam enjoys saving damsels. One thing I dislike more than an outright villain (Bill), is a villain with a halo.
Anyhow, some of your interest may have waned due to the script having more holes than an original chesty bonds singlet, and due to the fact, that neither Grams nor Sheila were in the building when Bill blew it to smithereens. (I have a whole warehouse of words like smithereens- they come with age). So let’s revive the passion for fashion with some suggestions of coupling, no triangling, we may hope to see.
Now these aren’t spoilers, but me trying my hand at script writing.
Stephie tires of Liam pretending he isn’t having an affair of the wallet with Sally. She moves on to Wipes but is also lusting for Bill.
Bill is lusting for Brooke and Stephie.
Wipes moves on from Katie and lust for Stephie.
Liam is out in the cold so lusts for Sally, until Hope comes back…or will that be Thomas? Anyhow, you get the drift. They always come in threes. And Eric is tickling the ivories for Quinn, Sheila and Katy, who runs to Eric when her sexaphoning with Wipes ends.
Avants are too boring. It’s time Rick moved onto Nicole. Nicole needs to be replaced by her wax dummy which is more animated. Or else the producers should use that ap on her where you can add a rabbit nose and cheesy smile.
And that’s all folks. 😁