It’s Lauren and Carmine versus Eve and Jason (better known as Mr and Mrs Chops). And for what is likely to be his final night in Kitchen HQ, the stylists have dressed Mr Chops in a shirt even more hideous than those that have come before him. It’s possible he could self combust if the studio lights hit the offending polyester garment at the wrong angle. 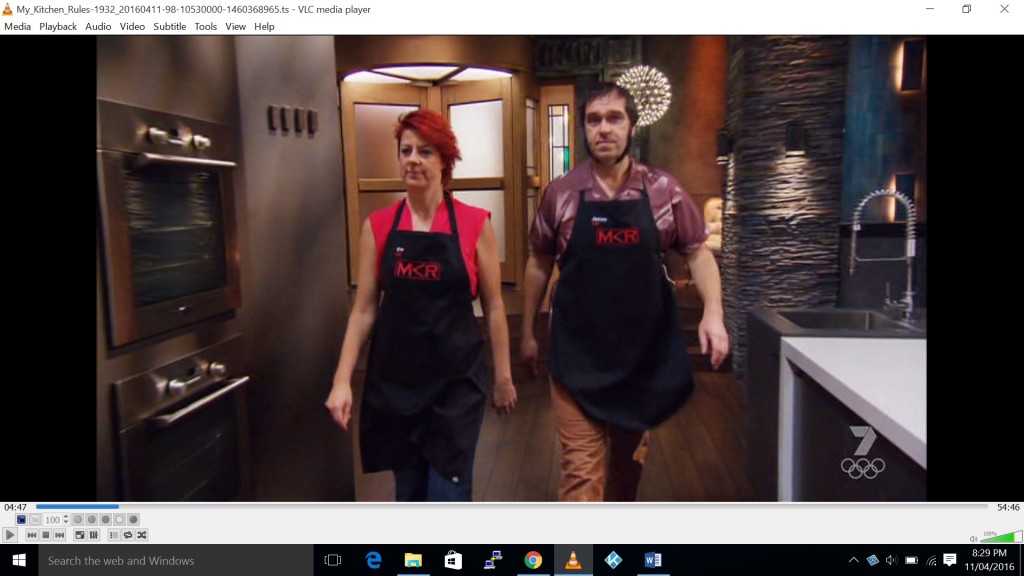 And Lauren continues to oblige the producers with some trash talk while the Chopses are bemused by this whole reality TV lark.
Manu wardrobe update: He’s back in the purple velvet, which is a letdown after his chef blacks last night at Fass’s restaurant.

Gangsta Lauren’s menu
Entree: Toretellini in brodo
Main:Beef brisket with mushy peas and roasted bone marrow
Dessert: Apple crumble tart with cinnamon ice cream.
Another broth? They’ve had great success with it in the past and are on rinse and repeat. As Zana comments: “By the 10th time you’d probably nail it.”
Lauren is determined to win: “I want to stick it to all those people who said I couldn’t do anything with my life. Stuff youse.” Where did she grow up? Detroit, in the trailer next to Eminem?
On the sidelines, contenders Anna and Jordan say there’s no need to mess with the perfection that is traditional gnocchi. Meanwhile, Lauren is working on her broth: “It’s gonna be amaze.” She has a dig at Chopses for their usage of jar shortcuts.
And the award for the first person to talk about treating produce with respect is Zana, in regards to the brisket. (This could make a good drinking game: One shot when the word respect is used; a sip for the word soz; two sips every time Lauren does her gangsta accent …)
Eve is trying to show the judges she has learnt new skills and is doing a good job of frenching her lamb racks. So Chops channels the spirit of Tarq’s Dad and quips: “No-one frenches like you, baby.” But – as predicted by Jordan – Chops has put too much cheese in his gnocchi choux and it ain’t working. He needs to chuck it but he won’t listen to the missus and doggedly keeps trying to make it work.
Carmine is working on the pasta while Lauren preps dessert, doing the double whisk, double saucepan thing. Credit where it’s due – she’s a fast worker. And Carmine’s tortellini look pretty.
Chops has cut the carrots too small and again is not listening to the Missus when she says they need bigger chunks. And then he uses tongs to one by one take out roasted cherry tomatoes from the oven tray. If I was Eve I’d throw a slotted soon at his head.
Lauren is seasoning her broth and chucks a bucket of salt in it. Chops is happy with his gnocchi but Anna and Jordan reckon he’s overcrowded the pan and won’t get the caramelisation he needs. Plus it’s a teeny serve.
Time to taste

Fass says the dish looks clumsy but it has good flavour. Guy says the pasta needs to be worked more. However, the seasoning is apparently spot on. But what does Zana think? “Whoa – that is some bad flavours in the mouth, mate.”

As suspected, it’s a fail and the gnocchi aren’t at all pillowy. Fass: “You’d have a crick in your neck if you slept on one of those pillows.” The sauce is nice but the judges note there is nothing spring like about the vegies they used. But what does Zana think? “I wouldn’t pay for either of these in a restaurant.” 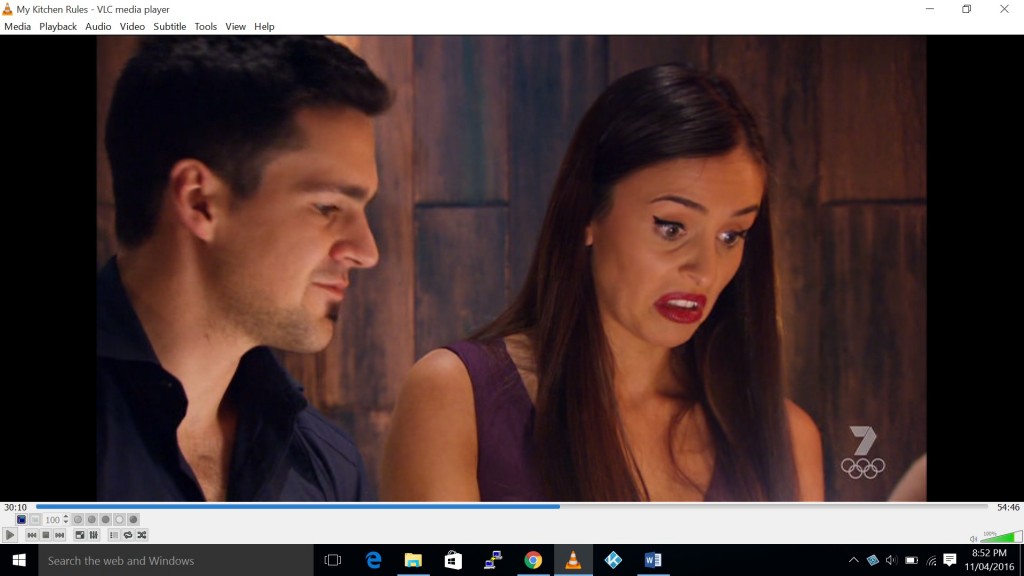 How does Zana keep a straight face in court?

On to mains
Lauren is checking on her soz and it’s too salty, so she adds sugar – to jus! Zana and I are both horrified. Now it’s too sweet, so she adds the packet stock.
Mrs Chops is also working on her soz, but there doesn’t appear to be much of it. Chops is trimming the beans and he’s so painfully slow the editors play Baby Elephant Walk in the background. Over to Jordan: “That turtle that beat the hare would easily beat Jason.”
Over in the other kitchen Carmine is having bone marrow trouble because his oven was set to grill. This happens all the time on MKR – wouldn’t you think teams would check each other’s oven setting ability for each course? At least the brisket looks lovely and tender.
Mrs Chops carves up her lamb racks and they look perfectly pink. Carmine chopping brisket and is adding even more salt to the meat. Chops is taking forevs to puree the parsnip and it’s the first thing that needs to go on the plate. Missus rolls the cutlets in fresh herbs for a vibrant dash of green.
The brisket goes on the plate and Curly Laura is worried at the lack of soz. When will MKR contestants learn the soz is crucial.

Everything is cooked well but the judges agree with Karen, who wants to see more “razzamatazz”. And thanks, Karen, for putting this old jingle back in my head:

Everyone loves it but they wanted more sauce. Fass: “This is my type of food.” Pete says both mains were very strong, which is not at all the impression I got. But what does Zana think? “I actually prefer Eve and Jason’s dish.”

On to dessert
Most of the dessert prep is already done, so Chopses are doing their lemon curd and crumb (which includes fennel seed – hmm, not sure about this. Rosemary would be more likely). However Lauren is yet to get her tart shells in the oven. And instead of trimming the tarts individually she’s trying to do a whole row at once with a strip of pastry and failing dismally. Just cut the pastry into squares, place it in the tin and then roll that pin over to trim, Lauren. She’s freaking out, but unless it’s a complete disaster they’re safe anyway. Lauren’s fired up, so she spits out: “Screw all those people that be drinking that Hatorade.” Yes … Seriously. Finally she gets the tart shells done but in the rush she breaks one getting it out of the tin. Chopses are actually plating up without it being a mad rush, but Missus isn’t happy with the consistency of her cheesecake mousse quenelles. Again, Chops is using tongs to laboriously put single items on a plate, this time strawberries. Dude, put a glove on, use your hand and save yourself five minutes! Their deconstructed cheesecake looks ok but if it was MasterChef there’d at least be some microherbs on there and a tuille.
Carmine and Lauren are in a world of pain getting their tarts on the plate but it all pans out in the end.

Everyone thinks it doesn’t look like much but it tastes great, and it’s the strongest dish out of their three courses.

Urgh – it’s that thing where we have to wait until the final critique to hear what they thought, so it’s probably good.

The verdict
Chopses: Comments are more of the same.
Guy 5, Karen 6, Liz 6, Fass 6, Pete 6, Manu 6. Total 35/60
Lauren and Carmine: Karen says the dessert was very simple, with only two elements: “They were impeccable.” But the highest praise comes from straight talker Fass: “In four years here I’ve only had one dessert as good and that was in the grand final. For me that was a 10 out of 10.”
Guy 8, Karen 8, Liz 7, Fass 8 (which elicits a *bleep* to the heavens from Carmine), Pete 8, Manu 7. Total 46

Goodbye, Eve and Jason. Yes, you weren’t the best cooks in the world and you embrace dreadful facial hair, but you were real people on a reality TV show and you never tried to speak gangsta or use the word “Hatorade”. 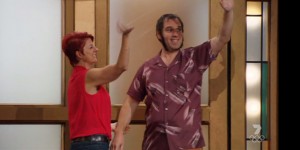 So tomorrow night another team will go and we’ll learn who the Final Five are (any Battlestar Galactica fans out there? No? Moving on, then.) We’re left with Anna and Jordan, Curlies, Sisters, Lauren and Carmine, Dads and Zana and Plus One. You’d think the first three teams are safe, although someone could always drop a tray or decide to serve seafood pasta in a bag.