It’s time to see how the teams cope in a real kitchen under the scrutiny of our favourite Oirish chef.
Yes, it’s off to 4Fourteen in Surry Hills, NSW, which has lots of happening restaurants.
Here we go … 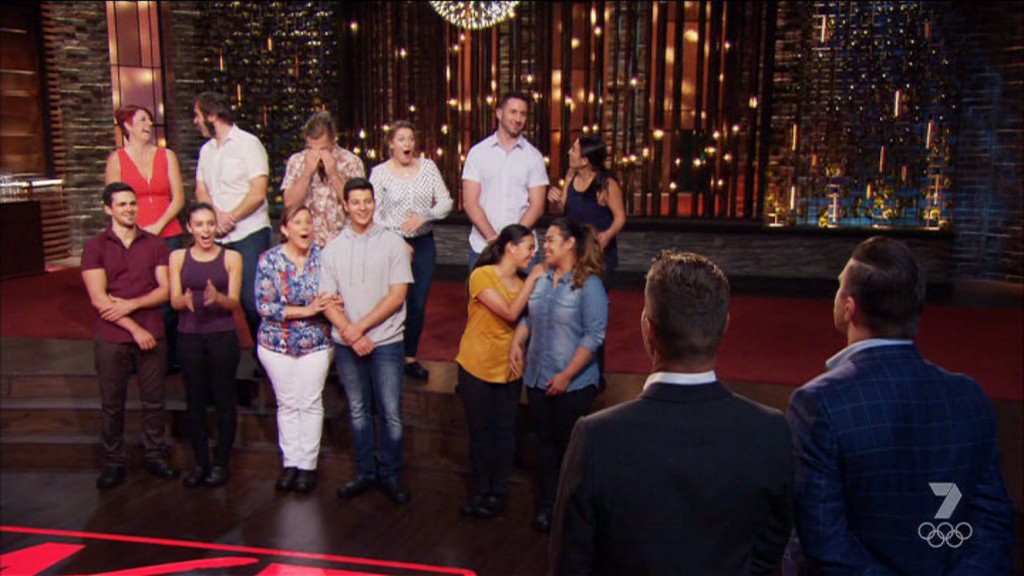 The teams arrive at Kitchen HQ and learn they are cooking at a real restaurant and Fass tells them it’s not just any restaurant: “It’s moi restaurant.”
They look equally scared and excited. They have 90 minutes to create a main course worthy of 4Fourteen, which has a nose-to-tail ethos.
Fass’s chefs and restaurant managers will also be tasting the food. And the winner will not only get bragging rights; their dish goes on to his regular menu. That’s the equivalent of getting a spread in Elle magazine in Australia’s Next Top Model. 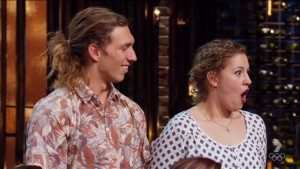 Losers will go to sudden death and then Fass drops the bombshell that he won’t even set foot in the kitchen. Surely he’ll be yelling at them from the pass at some point, otherwise that would be no fun.
It’s not a huge place so they’ve split the teams into two shifts. 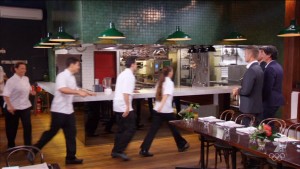 Love the open kitchen and the green lights.

Jordan and Anna are focused and determined to win – apparently Anna has dreamt of being a chef for decades. They haven’t put a foot wrong thus far. 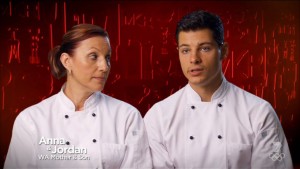 Here’s a pic just for Windsong so she can swoon over Jordan in chef’s whites.

They have taken heed of Colin Fassnidge’s warning to not waste any food – let’s see who forgets and suffers the wrath of The Fass.
The menus of shift one
Anna and Jordan: Charred harissa octopus with duck fat potatoes and kale
Zana and Plus One: Salt-baked rainbow trout with sauce vierge and heirloom tomatoes.
Mr and Mrs Chops: Lamb liver and onions with crispy black pudding and sweet potato (sounds heavy – is there anything to provide freshness on the plate?)
(Remember, Dads aren’t cooking tonight as they won the Coles magazine challenge with their peri-peri chicken.)
Plus One is peeling blanched tomatoes ever so slowly – did he forget to cut crosses in the bottom? Zana is doing a Marco Pierre White and thinks if she repeatedly tells him to work faster he will become more technically competent. Manu pops into the kitchen to make everyone even more nervous. 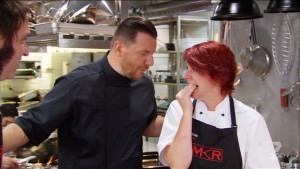 So much better now than in the velvet smoking jackets.

Mr Chops is feeling confident, which means we should be worried for him – I really hope they don’t overcook the liver.
Gianni and Zana are serving a herb sorbet with their fish, which sounds intriguing. They’re pushed for time but I guess the restaurant has a blast chiller.
The judges like the sound of the Chopses’ dish, but are worried about Jordan’s call to serve the occy in a sea of kale and apple soup, and worried about how much work Zana and Plus One have to do. Luckily Zana is a machine at multitasking. 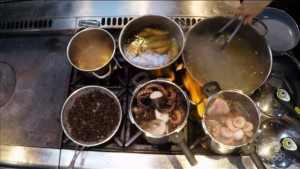 Anna has a lot going on. 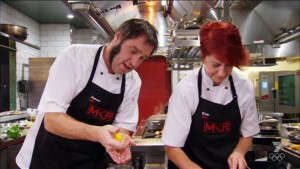 No Lemon Squeeze on Colin’s kitchen.

Anna takes the occy out of the pressure cooker and is worried it’s a bit over, while Zana reckons her trout is perfect. Jordan is not happy with his unbalanced kale juice – Jordan, it’s not the balance, it’s the fact you decided to use the devil’s vegetable in your dish.
Fass’s staff arrives and it’s almost time to serve. Zana and Plus One are way behind, so Manu steps in to organise their bench space. 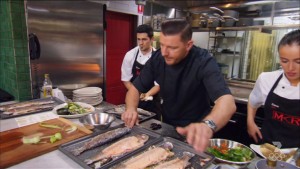 Manu to the rescue.

Everyone’s panicking and the Chopses are just chucking stuff on the plate. It ain’t pretty and Eve knows it: “Jase, that’s a bloody doh’s breakfast.”
Jordan is adding the kale juice even though he’s not sure about it. It will either be a triumph or a disaster. 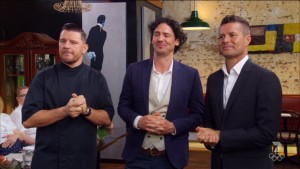 Note Colin got a waistcoat again, because that’s what Oirishmen wear, apparently.

As suspected the liver is overcooked. Fass likes that they used offal but it’s an old-fashioned fish. Manu says it’s missing finesse.

Everyone likes the balance of the harissa heat and kale juice and the occy is delish. Fass: “There’s nothing on this dish I’d change.” Manu suggests thickening the juice to a more soz-like consistency. The staff reckon it would sell.

The fish is cooked well, but the sorbet puzzles everyone. Manu thinks the dish would be easier to eat with trout fillets so diners don’t have to dodge the bones.
So, Anna and Jordan are in the lead thus far.

This kind of challenge is right up the Curlies’ alley, and the Sisters should do well also. The Curlies have chosen a challenging dish, while Lauren is doing, umm, balsamic ribs. Sounds like something I’d cook at home – not pay for at a restaurant. And she’s doing her dreadful gangsta accent again. Ick.
Manu pretends to stir the Sisters by questioning their use of miso, but they point out Fass already uses it on his menu. Gracia has a brain malfunction and freaks out that the oven is too hot, but luckily Tasia knows the difference between Fahrenheit and celsius. 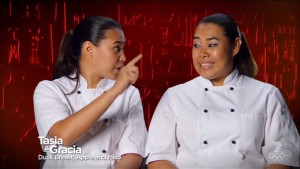 But later Tasia keeps calling turnips “tulips”, so perhaps their ditziness is genetic. Just as well they can cook – they’ve smartly done a test duck breast so they can test the strength of the commercial oven.
Curly Laura is making a rosemary ash to coat the cooked lamb – it’s ambitious stuff. Burnt rosemary is rather bitter but she usually knows what she’s doing.
Lauren is feeling the pressure of her pressure cooker not working, but luckily Carmine is keeping a cool head.
The judges think the ribs could be too sweet and cooking duck is tricky but Fass is keen on the lamb dish: “You had me at brains. Very cheffy but can they pull it off?”
The other teams are doing well not to be rattled by the Sisters’ screeching. Fass reminds Pete he once hired a past contestant who still works for him. But they don’t name names for some reason. (Thanks, Google – it was Drasko! Ah, that’s right – the ADD-type guy with the talented cook wife. Still, if Fass’s kept him on so long he must be doing ok.) The judges are worried the Curlies are juggling too many elements and that the Sisters’ miso soz won’t taste right.
Speaking of soz, Curlies have forgotten to make their stock into a jus, so with what appears to be five minutes to go Mitch chucks some in a pan and cranks it. Manu pops by to give advice on how to plate efficiently and in the process calls Laura “darling”. She’ll get a job out of this from someone, no matter how much further she goes. If Drasko can get a job in a kitchen, it should be a cinch for Laura. Lauren and Carmine are also having soz trouble – they haven’t made enough. Curlies’ jus isn’t working so they ditch it and add more mint sauce.
Time to taste

Everyone loves the lamb and Fass is super impressed, even though he thinks it needed the jus: “It’s like finals week cooking.”

Pete loves the cabbage but Fass thinks it’s the best thing on the plate. The ribs are a bit dry and flavourless – they needed heaps more glaze. One of the floor staff points out 4Fourteen already serves a rib and pickled cabbage dish. Didn’t the teams get to peruse the menu beforehand? Maybe not.

“It’s a playful dish,” says Pete, who then points out it would be easy to serve in the restaurant. The woman who appears to be Fass’s head chef wouldn’t change a thing and thinks the customers would love it.
So is it between the occy and the duck, because Curlies’ dish is too labour intensive for kitchen service? Bottom two must be Lauren and Chopses.
Time for judging
Pete is in raptures over Jordan’s kale juice: “It made the dish.” Chopses cop the overdone liver critique on the chin – they aren’t delusional like some past contestants. The other comments are more of what we’ve heard already, although they are harsher on Zana in order to build up this fake rivalry with Lauren. And the winning team, who get their dish added to the 4Fourteen menu, is … 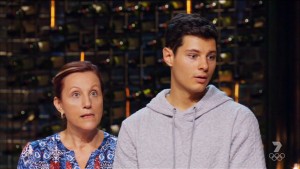 Next on the menu: stunned mullets.

They also get an advantage is the next challenge.
And the bottom two teams are … Chopses and Lauren and Carmine. No surprise there. Zana’s dish was waaaay more complicated than pork ribs and tasted good.

What do you think Anna and Jordan’s advantage will be? More time to cook? If this was MasterChef they’d get to choose the ingredient everyone would cook with, but MKR doesn’t like to freestyle it.