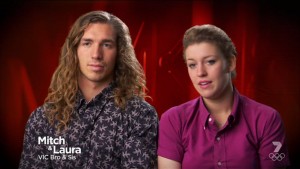 After a quick hug with Mum and Dad the Curlies are off shopping, and we’re reminded they live in the boondocks so that when they forget an ingredient on their list later we’ll realise what a big deal it is. They say they like to cook food that’s different and challenges people. 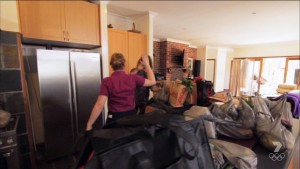 That is a lot of shopping! And so much plastic – tsk, tsk.

Is it the sweetbreads (glands) that freak Zana out when she finds out? She eats liver, though. As the Curlies set up their mossy, foresty restaurant we’re reminded of Zana’s germphobia.

Curly Laura gets started on prepping the pheasant while sous chef Mitchell does veg stock prep and brioche duty. They know their coffee icecream has to be awesome because the Sisters did such a delish pandan ice cream. But then Laura realises something: “We’ve done something ridiculous.” (Umm, entered a cooking competition that won’t finish until you are in your 30s?) No, they forgot the cream and it takes 20 minutes just to get to the shops. Pity they can’t just milk a cow but I guess MKR liability doesn’t cover unpasteurised milk.
Mitch dashes to the shops and they still seem to be going ok. They get changed and the stylists have put Laura in a dress that’s so impractical for cooking. a) it’s white b) it has flowy sleeves b) it looks like it’s made of highly flammable material. 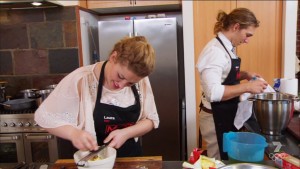 Forget the muslin and use your sleeves to strain the stock, Laura.

Here come the other teams to the tune of Elle King’s Exes and Ohs (bizarre fact: Her Dad is Rob Schneider AKA Deuce Bigalow).

Everyone looks nice, like they’re dressed for a spring wedding. 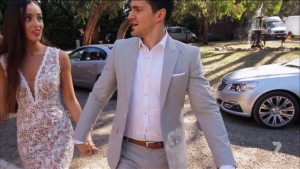 Nice suit, Plus One.

We’re reminded that Anna and Jordan and Zana and Plus One have been here before, so that’s three teams from Group 1 still in the comp. Tasia and Gracia are the sole survivors of Group 2 while Lauren and Carmine were in Fass and Khoo’s Group 3. At the table Zana is clearly uncomfortable with the natural setting and Lauren is on the same wavelength for once: “This grass is making me bitchy.” Oh, sorry – that was itchy. 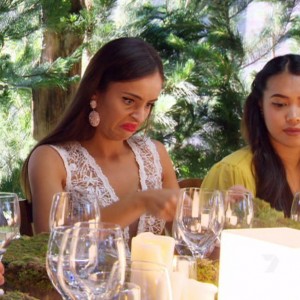 In the kitchen the brioche looks divine and Laura is teaching viewers how to clarify stock with a raft.
The judges arrive to the “It takes two” lyric from Gossip’s uber funky Heavy Cross and do their synchronised buttoning up of jackets.

Time to order and Lauren drops the first “amazeballs” of the night in confessional when talking about how the onion broth had better stack up against her own creations. How many more minutes until we get the dreadful American accent?
No-one at the table who ordered sweetbreads knows what it is. Anna tells them it’s lamb balls, but later in confessional refers to them as the more genteel “testicles”. Not quite right, anatomically, Anna, but we get the drift. 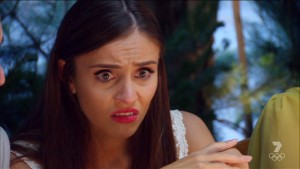 Did Zana think sweetbreads were doughnuts?

Luckily Zana is reassured they’re kind of like liver.
In the kitchen the Curlies are plating their goat’s cheese fondants and they look gorgeous. Their plating is way beyond everyone else, but while it may look lovely Mitch is worried the time it takes means the fondants won’t be oozy.
Time to chew

Pete loved his fondant, even though it wasn’t oozy. Manu – who took a swig straight from the broth bottle – thought it was fabulous and a flavour explosion but they should have pan-friend the french toast.
Sisters love their broth, Jordan loves his fondant but Zana is not impressed with her entree and, shock, horror, Plus One finds an unwanted garnish on his plate. 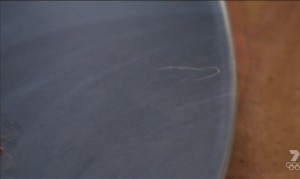 After Manu has finished saying he loved the broth, Lauren gives her critique: “I wouldn’t be going back to the kitchen asking for more. Am I blown away? No, I’m not.” Ah, so tonight we get more strategic scoring?

Back in the kitchen
Laura’s taken on a lot of work doing risotto for an instant restaurant – it could easily go wrong.
Night has fallen and some contestants are finding the bush setting a little creepy, especially when a dog starts howling. 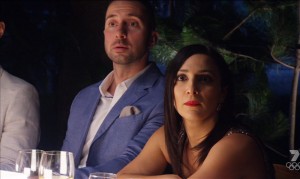 New MKR twist: John Jarratt is going to leap out from under the table with a knife. 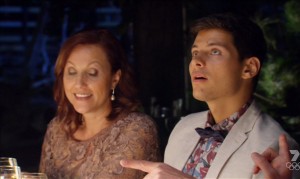 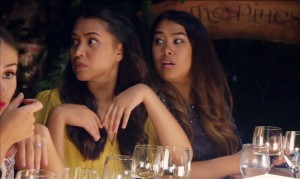 Pity Pete and Manu weren’t at the table when it happened. Curlies plate up the mains and they again look great, but the pheasant may be overdone. She’s managed to make beetroot risotto not look too much like a crime scene.
Time to chew

Manu says the risotto was delicious but it’s a little undercooked and he’s sad there was no skin on the pheasant, as it lacked crispiness and was dry. Pete says the sweetbreads weren’t enough like little clouds but the other elements were great: “For such a young team cooking like this, you should be very proud.”
At least Jordan is loving his first taste of sweetbreads: “It’s my first gland and my favourite gland.” But then, disaster: Zana has a hairy sweetbread and this time because it’s on her plate and not Gianna’s she flips out. 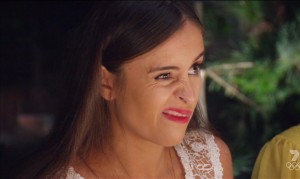 She could be a gurning champion.

Jordan offers to eat Zana’s dish as she says she can’t try any of it.

Back in the kitchen Laura is working on her porcini caramel tart and the pastry is too short and being problematic. Once cooked it looks really cracked – they should just crumble it and treat it as a deconstructed job. Yep, and that’s what Laura does. It’s a bit messy but we’ve seen worse. “Oh, this looks like absolute balls,” Laura says. Mitch is happy with the meringue but not the consistency of the custard.
Time to chew

Manu loved the coffee icecream but knows there was a problem with the dessert. He says there is too much sweetness but the porcini was something “kind of special”. On the whole, it did not deliver. Pete liked his meringue but the custard was flat.
Curly Laura knows they bit off more than they could chew and it’s true – it’s the kind of menu we’d usually see in a grand final, after they’d had time to hone their skills.
In confessional Carmine suggests Lauren give Laura a lesson on both custard and tart making. “I’ll give her a two-for-one demo; I’ll make her a custard tart,” says Lauren. Judging by the ad for your instant restaurant, Lauren, you shouldn’t be so cocky.
Everyone’s eating and then – calamity – Zana finds another hair! That’s two for her and three in total for her team. Well, that’s what happens when people with mop hair cook and TV producers won’t let them wear hair nets. Zana flips out more than Grant Hackett on a Virgin flight.

The devastated Curlies are in danger but Lauren and Carmine cook tomorrow, so who knows.