Anna and Jordan arrive home to a party that was not at all organised by the producers. They totally did not just leave their house, drive round the block and pull up out the front. Why does no-one else get a party? Other teams get a quick cuddle if they are lucky. Thank goodness Jordan is back in a nice shirt again.
It’s off to the shops and they are getting their fruit and veg at a greengrocer, not Coles. And their meat is from a specialty butcher but the blue swimmer crab comes from Coles (perhaps that was in the contract).

It all sounds divine.
I can’t remember any team cooking a whole animal before so this will be cool to watch. Jordan says: “We’re lucky enough to have an outdoor kitchen with a commercial size oven.”
Anna and Jordan are multitasking like crazy in their two kitchens – they have so much to do. I can totally see Anna giving cooking demos or classes in the future. There’s a little light bickering, mainly because Anna won’t trust Jordan to do his job, which is the gnocchi. Surprised she didn’t do that one while he made dessert, which needs less intuition.
Here come the guests and Lauren is in a really nice dress, but then they show a confessional of her again mentioning the “two-fiddy-kay”. Urgh. 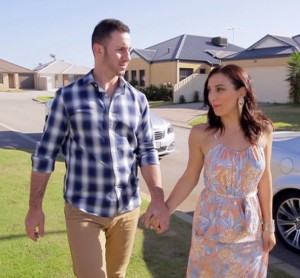 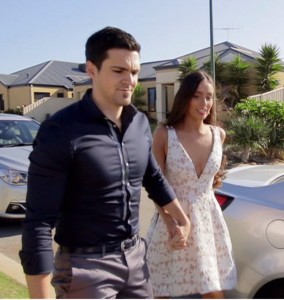 They love to put Zana in plunging necklines.

The guests are seated next door to the outdoor kitchen so are getting tantalising wafts of that piggy sizzling away. And here come Pete and Manu, to the strains of Dare by Gorillaz.

As the menus are read there are lots of happy smiles from the guests and I’m with the sisters – suckling pig all the way. Laura and Zana both think it’s a menu well within Anna’s capabilities. Poor Laura knows she’s on the chopping block and safe Lauren looks like the cat who’s got the cream.
Back in the kitchen Jordan is worried that Mama hasn’t assembled the bombe Alaskas yet – he seems to be in charge of time management. She listens but then, just as they are debating the best way to cook the squid, in comes Manu. I’ve never seen him come in so early before – are they trying to rattle them? Then, Jordan has gnocchi drama because they are so delicate and losing “pillowiness”, so Anna takes over. They do look delicious, though. There’s a bit of tension over cooking methods so Jordan takes over plating up while Anna cooks the protein, which is playing to each of their strengths. Plating done, they kiss and make up. “Come here – I want to apologise because I’m being a bitch,” Jordan says.

Manu tells them they need to work as a team and Jordan confesses “I’ve been a bit of a pain”.
“I would agree with that,” Manu deadpans. “I would never talk to my mum like this.” Anna says it’s all in the heat of the moment and “no offence taken.”
Manu had the gnocchi and loved the mushroom flavours and texture, but says the gnocchi – while delicious and caramelised – wasn’t right.
Pete loved the squid dish’s flavours but thought the tarator was too pasty. But it was still excellent.

Back in the kitchen
Jordan’s a bit down and has a little moment. “I just want it really bad,” he tells Anna, crying. Awww. 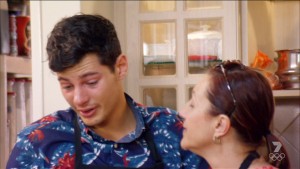 In the restaurant Lauren says the squid is a “flavour bomb” while Mitch and Laura critique the gnocchi harshly. No hairs, though.
Anna gets on to the crab while Jordan laminates the pasta, creating cool black lines with the squid ink-dyed pasta. Impressive – I thought they’d just do separate black ravioli and white ravioli. 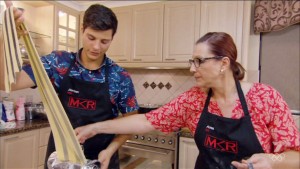 They seem to have an electric pasta machine – I’ve never seen one before! Google says you can get one for about $250.
Anna and Jordan are bickering a bit about the pig, and how to achieve crackling without drying out the meat. And their pig juss is too salty for sauce, so Jordan has the great idea to add his celeriac and apple liquid, and it works. They plate up and the black stripes on the ravioli look like nori. Surprised they didn’t serve something green with the pork.

As the mains are served Laura whispers to Mitch: “Smells like two-minute noodles”. Ooh – snarky.
Pete had the pork: “You took a huge risk cooking a suckling pig.” It’s another fake out. “I absolutely adored it… I won’t say it was a pretty dish but it was a bloody good dish.”
Manu liked the technique of the striped pasta and though the dish was really tasty, but the bisque was too thick.
Zana finds the bisque too rich but they are mainly interested in showing negative comments from the Curlies.

Back in the kitchen it’s dessert time and Anna gets on to the crostoli. I remember the twins made this last year. Then Anna has a blast wielding the brulee torch for the meringue. Will they cop flack for serving panna cotta in a glass? They would on MasterChef, where it’s all about wobbly bits. It looks good, though.

Pete pours the spirit over the bombe Alaska and Manu flicks the gas lighter on, but there’s only a small flame and everyone’s underwhelmed. He struggles to cut through the base of the dessert. And it turns out it’s because they froze their sponge with the rhubarb and ice cream, so it’s all rock hard. This must be a recipe they’ve never done before. “You’ve got this layer of icy fruit which isn’t pleasant at all, guys.” The meringue was good. Pete says it’s below average. Uh oh – a bombe.
Manu loved the flavour of his panna cotta and the espresso jelly. The crostoli was the perfect accompaniment. However, while Manu is ok with the dessert being in a glass the panna cotta is too thick. I can’t tell whether he said it should be “bouncing” or “dancing”. (Think they used too much gelatine.)
The Sisters are the only ones who’ve enjoyed everything tonight but they did luck out with their choice of textures. Even Lauren, who’s heaped praised upon the other dishes, hates the bombe Alaska. And, of course, Mitch and Laura are facing elimination and didn’t like anything.
So that’s two talented teams who’ve faltered under pressure – they could have done with a few of Lauren’s sudden death cook-offs to toughen them up.
Time to score, and Anna and Jordan should still beat Curlies score of 60.

Tomorrow night it’s Zana and Gianni and don’t forget there’s another episode Thursday night, as there’s no MKR Sunday. Presumably we won’t hear Z and G’s scores until the Thursday so they can string out who’s made the semi finals. And what the heck is Manu holding up in the ad? 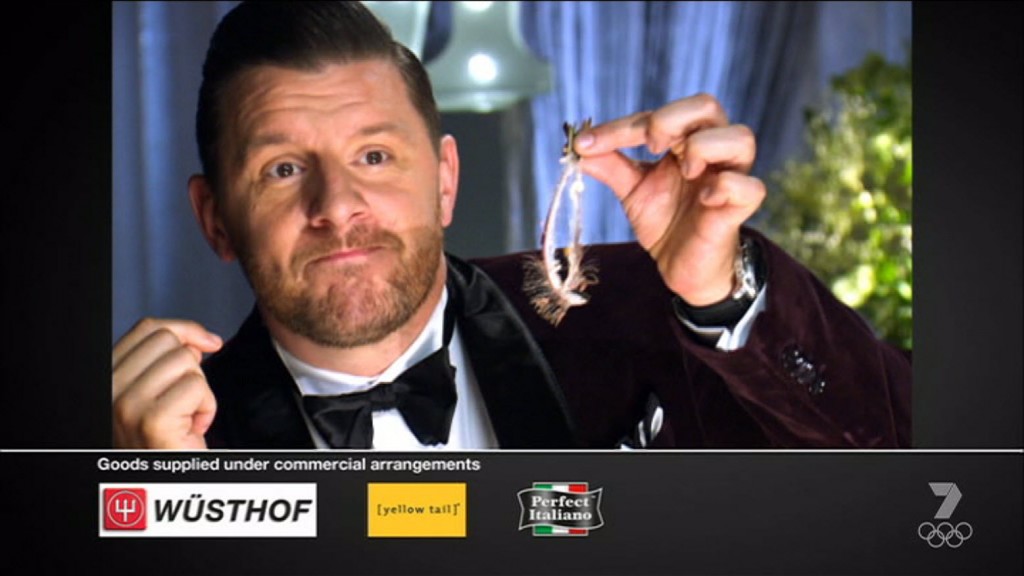