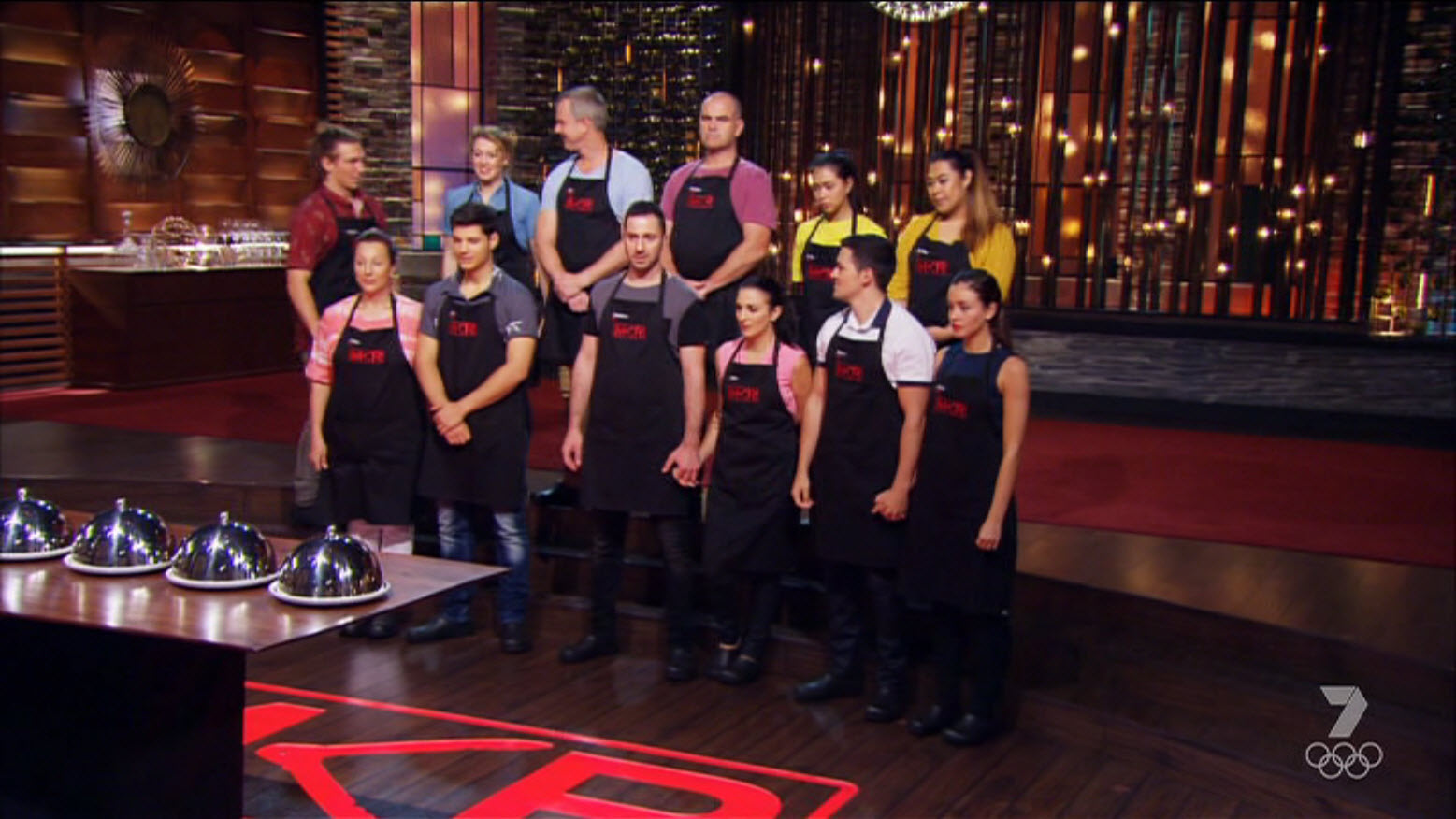 The contestants enter Kitchen HQ and there’s a row of cloches waiting for them – how very MasterCheffy. Pete says there will be a rapid cook off for all six teams. At the end four teams will be safe, and the two weakest teams will go to sudden death.
The rapid cook off will require the teams to combine unusual flavour parings chosen by Pete and Manu (yeah, right) for a dish. What a pity they are only doing one round of this and then the same old sudden death.
The flavour pairings are saffron and vanilla (screams some kind of milky or ricey dessert), beetroot and chocolate (actually a common combo for cakes), lamb and apricot (umm, Moroccan tagine, anyone? As if this is an unusual pairing), fig and liver (ok, that’s weird), basil and raspberries (used in some modern desserts already), rhubarb and black pudding (odd but you could do a chutney with the rhubarb). Having won the restaurant challenge with their occy dish, Anna and Jordan get to allocate the flavours to the teams. Or in Gangsta Lauren’s case, flava. The biggest threats are Curlies and Sisters, so, strategically, they should get the fig and liver and rhubarb and black pudding.
Mama and Son take saffron and vanilla for themselves. Dads get basil and raspberries; Zana and Plus One liver and fig (and Lauren and Carmine think this is strategic, as Zana likes offal and they reckon she’s not a threat); Curlies catch the easy lamb and apricot; Sisters get rhubarb and black pudding; and Carmine and Lauren get the easy beetroot and choc.
They only have 45 minutes to cook with, which is not long to braise or bake anything.
What they’re making
Zana and Plus One are doing chicken liver pate with balsamic figs – what a great idea. Yum. They decided to add some fig jam and cooked liver, also, to do the cheffy two ways thing. There’s not much room to move at the kitchen benches and, of course, they’ve placed Lauren next to Zana, hoping for some argy bargy. Lauren is making chocolate ganache with beetroot sauce and macadamia crumb. She’s baking her ganache, first adding eggs. Sounds like you invented cake, Lauren.
Dads are doing raspberry sponge with Italian meringue and sweet basil pesto. Sounds good but I thought they would do little sponges rather than one larger dish.
Sisters are freaked out by cooking with black pudding, which they’ve not used before, and the almost as unfamiliar rhubarb. Their dish sounds really interesting: Black pudding Scotch egg with rhubarb mayonnaise. I would ditch the mayo for a rhubarb chutney but they are usually great with flavours, so let’s see.
Jordan and Anna are doing a savoury dish: Saffron and vanilla lobster with saffron pasta. Jordan is sous videing the lobster. Forty-five minutes is not long to make pasta, but both Anna and Curly Bro are attempting it. Curlies are doing spiced lamb rack with apricot puree and tortellini.
We’re subjected to yet another sequence of Gianni peeling things waaay too slowly – livers this time – although he’s not quite at Chops level. They’re hoping their pate will set in time for popping it the freezer.
The Curlies’ tortellini looks so cute, and no doubt their pasta will be thinner than Carmine’s last night. Speaking of, Lauren is worried that none of their elements is ready and is getting angsty. Carmine knows her well enough to stay out of her way.
Dad Cookie forgot to set the timer for the sponge, so they disagree over whether it’s cooked through. Have they stuck a skewer in it? Cookie wins the mild disagreement and grabs the cutter, but – uh oh – it’s raw in the middle. Do they have microwaves? Don’t think I’ve ever seen one on MKR, but they used them on MasterChef for siphon sponges all the time. They do their best and smush together the cooked bits with raspberries and top their Frankenstein sponge with torched meringue. They haven’t attempted as many elements as other teams.
They are not the only ones in a world of pain. Over at Curlies’ bench, Laura cuts into her lamb rack and it’s raw. Lauren’s ganache is too warm to quenelle properly. Jordan and Anna are plating their open lasagna and he’s not happy: “As time goes on, this plate gets uglier and uglier and uglier.”
Tasia is watching the clock and waiting until the last minute to pull the scotch egg out, so Gracia is freaking out. Gianni is frantically trying to pipe pate on the plate.
Lauren isn’t happy with their rushed plating: “This dish looks like a crime scene.”

The judges don’t give anything away but the egg yolk was delightfully oozy. 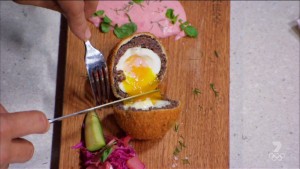 Perfect. These girls are on fire.

Someone went crazy with the black pepper. Jordan is not happy but I’d be shocked if they don’t get through.

The livers look nice and pink.

Lauren sounds sooo nervous and I feel a bit sorry for her, but then they cut to confessional where she does her American accent again and I change my mind.

And the verdict …
Jordan and Anna: Manu says it looked messy, the lobster was well cooked and they used their ingredients well.
Zana and Plus One: Pete says they highlighted the figs and livers well and “it was very hard to fault.”
Sisters: Pete says it was unusual and smart. Manu loved it.
Dads: Manu says it looked pretty but the sponge wasn’t cooked and it lacked basil flavour. Pete wasn’t wowed.
Lauren and Carmine: Pete “didn’t mind” the baked ganache but it needed more beetroot sauce.
Curlies: Pete says the tortellini was sensational, the apricot good and the lamb underdone.
So I’m thinking Dads and Lauren for sudden death (which is what most of us predicted last night anyway). Yep, that’s how it goes.
That was a fun challenge – I hope they do that again.

Sudden death
For round two the teams have to create one dish with classic flavours. They have one hour to cook. This could go either way.

After the success of her apple crumble tarts in last night’s sudden death episode, Lauren decides to go pastry again with a white chocolate and raspberry tart. She’s making a chocolate pastry because she’s good at pastry. “If people want to call me a dessert queen, I’ll let them,” she tells confessional. But then she blanks on the pastry recipe. She sounds hoarse – maybe she’s crook. Luckily Carmine remembers: 3-2-1 (is that flour, sugar, cocoa?).

Dads are making mint-crusted lamb backstrap with peas and mint. Sounds simple so they’d better add some fancy pants elements.
Carmine is making a raspberry sherbet to go with their tart and on the sidelines we hear Zana say “I think they should be leaving that out”, but it sounds like it’s come from another part of the MKR timeline. Lauren is attacking her pastry again – but there seems to be less violence involved than last night.
The Dads do a tester with their herb-crusted lamb but they’ve cranked the pan up too high, so it burns and the crust falls off. This is their first time in sudden death and they are losing it. Anna doesn’t know why they don’t use egg to stick it, which is what everyone at home was yelling out. Or they could just cook the lamb and do a deconstructed crumb.
In the other kitchen Lauren is trying to temper white chocolate but Curly Laura says she’s aiming for the temperature used for dark choc. She’s freaking out over whether her tarts are ready and second guessing herself on everything.
The Dads cut into their lamb and it looks lovely and pink. But won’t their crust have gone soggy from being covered in foil to rest?
It’s the usual last-minute dash and the Dads’ little French fries look deliciously golden and crunchy. Neither team has done the best-looking dish and Lauren went easy on the raspberry soz.

And the verdict
Dads: Pete says the lamb was cooked properly and he liked the chips, but Manu says the crumb lacked crunch. However, Pete loved eating it.
Lauren and Carmine: Pete says the pastry was sensational and he liked the white chocolate mascarpone filling and the playful sherbet. Manu thinks she should “bottle” her pastry recipe. However, the soz was lacking.
Pete says it’s very close but it’s obvious the Dads are going home. The judges hand down the verdict, as expected, and Carmine is in shock. Everyone tears up and Manu gives his usual farewell salute. At least they get to see their recipe in the Coles magazine and they behaved impeccably throughout the series. 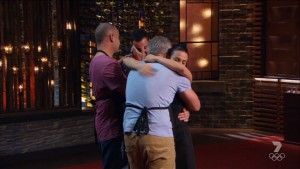 So the Final Five are Curlies, Sisters, Mama and Son, Zana and Plus One and Carmine and Lauren. Tomorrow night it’s a flashback to the instant restaurant days as we go round the country yet again. It looks like we’ll get some delicious dishes and we hear Pete utter the words “it’s the highest score ever”. There’s also a shot of a warm sauced being poured over a chocolate disc balanced atop a glass, which was a technique used in a dessert pressure test set by Shannon Bennett in last year’s MasterChef, so I’m thinking that’s a Mitch and Laura dessert. I did enjoy the snippet of the Sisters being so overjoyed that something was properly cooked and wanted to hug Manu but being unsure if they were allowed to touch him.

Did you all enjoy the varied format of tonight’s episode? I did. And now I’m left pondering what I would have cooked if I’d got each of those flavour pairings. And I’m going to look up that tart recipe because I have no idea from watching the show how she made those pastries work.