It’s Wednesday night MKR, so chat away. I probably can’t do a recap tonight, so contributions welcome.
TV blurb says: The top teams will travel the country, showcasing to judges Pete and Manu how far they have come by going back to where it all started – their Instant Restaurants.
No full recap tonight but a few points below and the dish pix.

* Tonight it’s the turn of the Sisters, Tasia and Gracia, who are among the top three contenders at the moment (although in their first instant restaurant they only scored one point higher than the Miners – yep, that’s how bad it was). As usual at this time in the comp they have to cook two options for each course.
* While perusing the menu Pete mentions that Manu’s mother-in-law makes a good rendang. Google says his partner is Malaysian-Chinese-Sri Lankan, so their household must be food heaven. (And thanks, Google, for teaching me Manu is short for Emmanuel). I love a good rendang and have used this recipe for years http://www.notquitenigella.com/2011/06/23/beef-rendang/
* Zana hasn’t eaten much Asian food and is “not a fan”. Has she been living under a rock?
* What have they dressed Lauren in? Everyone knows you don’t wear white to eat Asian food – it’s way too saucy and splashy. 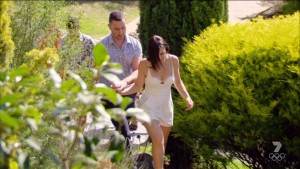 * These girls could never work together in a kitchen for other people – they are way too loud. They need to have their own cafe with an open kitchen so people can pay to watch them bicker as pre-dinner entertainment.
* The judges arrive to the tune of Franz Ferdinand’s Take Me Out.
* Here’s Jordan, crying prettily. 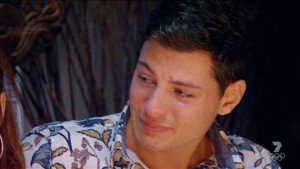 It’s ok, Jordan – at least you don’t have to eat Cougar and Cub’s food in this instant restaurant round.

* How good did those entrees look!
* Zana has never eaten a dumpling before. C’mon, you’re starting to sound like Jess talking about sugar. At least she liked it. Really – she’s never even heard of rendang?
* Mitch looks like he’s been on a tonne of Bali surf trips.
* Two sesame desserts? That’s a lot of sesame.
* Lauren said two-fiddy-kay again (vote in the Lauren’s most annoying phrases poll if you haven’t already). She’s not getting much of the edit tonight – perhaps she’s sick?
* I was worried Manu creeping up behind the girls while they were at the deep fryer would result in a terrible accident. Their reactions definitely made good telly.
* Pete’s dessert fake out wasn’t fooling anyone: “That’s the best Asian desert I’ve ever had.”

Pete
Entree (crab) 9
Main (chicken) 10
Dessert (mango mousse) 10
Manu
Entree (dumplings) 10
Main (rendang) 8
Dessert (sesame ball) 5
TOTAL 85 (the highest score in ultimate instant restaurant round history)
* Well done, Tasia and Gracia. Despite the bickering you looked organised and the food was visually appealing. Top two looks likely.
* Lauren quote of the night: “Pete and Manu are handing out 10s like they’re Tic Tacs.”
* On Sunday it’s the Curlies’ turn. The previews show Zana having a meltdown at the table because she can’t eat something. Is it an unusual food? A hairy carrot? Something with a face?