Just a quick recap as I watch tonight. I’m thinking Zana and Gianni will be safe and it will be bye bye, Curlies. And remember there is more MKR tomorrow night.
And I reckon the weird thing Manu was holding up is a picked clean fish skeleton (totally stolen from my friend) and again they’ve tweaked the edit to amp up the drama. MKR lurves a good fake out. 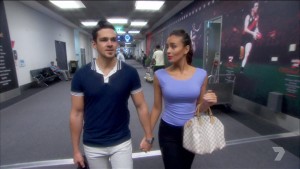 Just got off a plane? As if.

Menu
Entree
Adriatic seafood stew
Sardines with capers, olives and bread (yep – this is totally what Manu is holding up) 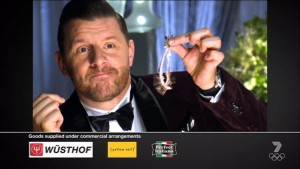 Zana is making filo pastry for both mains. That’s a huge job – and a huge risk.
The guests arrive to the strains of Rita Ora’s Poison (let’s hope that’s not a sign of things to come).
I can hear you all cringing as Lauren says: “These peeps are totes cashed up.”
Everyone’s dressed like they are going to a wedding and some of it’s not pretty (as per MKR stylist tradition). 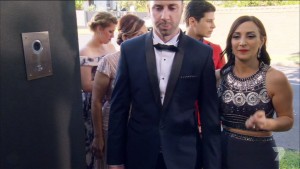 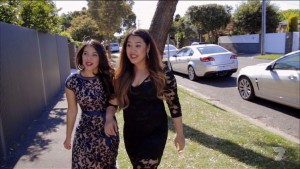 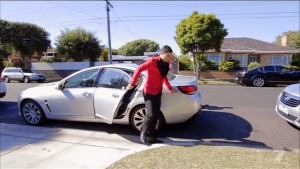 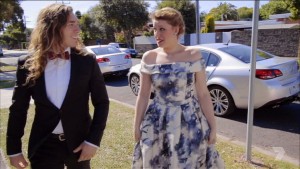 Early 90s dress which makes her look about 40

Zana and Gianni seem to be under control with their prep, but I pity poor Plus One trying to wash dishes and not ruin his crisp white cuffs.
The judges enter to the sound of Boom Clap by Charli XCX and Manu is back in the plum velvet jacket.


In the kitchen Zana is cooking the sardines and Gianni gets out the prawns, so of course we cut to Laura saying she’s not mad keen on seafood. She is right in that it is unusual to have two seafood dishes for entree, but she’s definitely providing the editors with ammo for her new sore loser edit. Still, she’s only 19 and it must be hard to “fail” on national TV, then have to sit through several more instant restaurants through gritted teeth when you know you’re probably going home.
Plus One tries to come the raw prawn but Zana doesn’t trust him and catches them in time. He stands by his call, though. 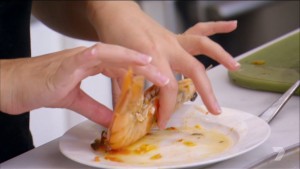 Foolishly they did not get any spare seafood so can’t taste one. Why oh why does this still happen? MKR is paying – buy a bucketful of prawns!

Pete laboriously peels his mega prawn and for a germaphobe it seems Zana is happy to ingest prawn poo because it’s “traditional”. 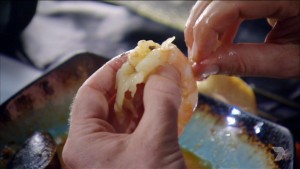 Manu loves sardines and, yes, that was a sardine skeleton he held up. But he thinks the dish lacked salt, which horrifies Zana given it had olives and capers in the sauce. However, they have been criticised for their lack of seasoning in the past.
Pete gets a bit aggro at them serving such a messy seafood dish when everyone is so dressed up. Surely if they’d modernised it they’d be bagged out for messing with tradition. This smacks of them trying to ramp up the tension to make a Laura V Zana cliffhanger. He says they should have cleaned the prawn and it lacked salt. “Apart from that it’s a smashing dish.” The seafood was cooked well (good one, Plus One). Zana wilts under the criticism.

Back in the kitchen
They’re organised with their mains but they do look more like entrees and – filo pastry making aside – rather simple. Before we know it it’s …

Pete, who had the burek cigars, says his burek was dry. The textures didn’t work and it was “average”. 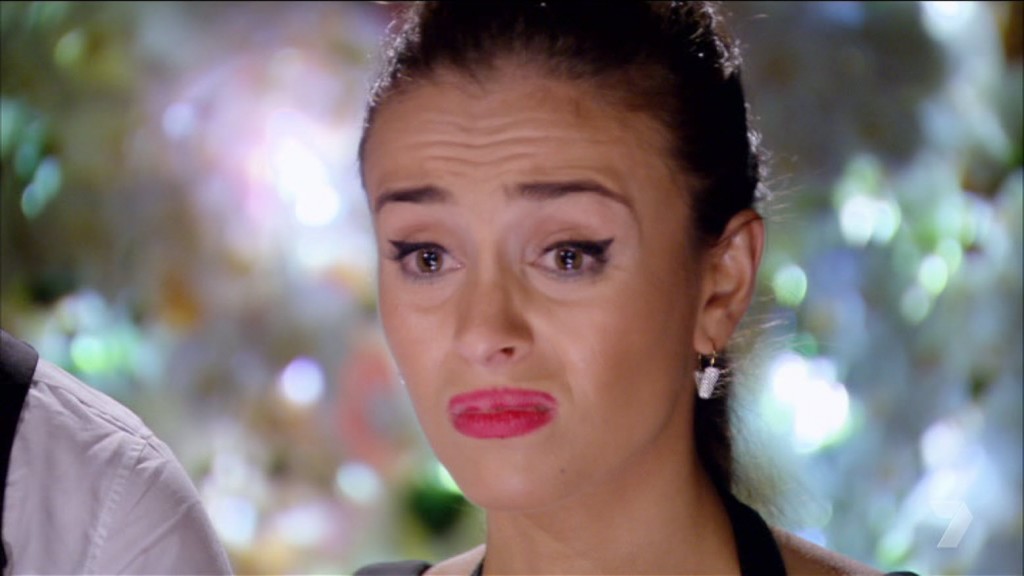 Back in the kitchen, it’s on to dessert. Zana is happy with her squeegie dish (apologies to any Montenegran readers) and brushes off Plus One’s concern that the mascarpone is bland. He’s ready to tip out his molten lava caka AKA chocolate fondant, which must be the most troublesome dessert for cooking shows – perhaps after ice cream and panna cotta. It looks good but a cake, some ice cream and a coulis is a bit basic compared with some other team’s efforts.

Pete had the choc cake and says it was moist and rich, while not super lava-like. “This, is a great dessert. Strongest dish of the night for me.” Go Plus One!
Manu doesn’t want to hurt anyone’s feelings because he knows it’s her grandma’s recipe “but I didn’t really enjoy it”. Ouch. He says it’s all rather savoury tasting (and, yes, Plus One was right on the mascarpone). Zana is totes devo.
The other teams who got the squeegee are looking longingly at the lava cake. Anna says it’s like cardboard.

Scores
We’re back in Kitchen HQ for the scoring, but first a reminder of the scores thus far. 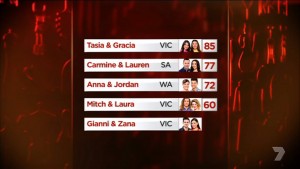 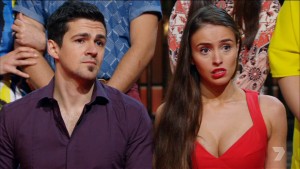 This woman could do Pantene commercials.

Laura (who again they’ve applied make up to like she is 50, not 19) tears up, wishing she’d done MasterChef instead. Perhaps they’ll open a farm kitchen at their folks’ place. 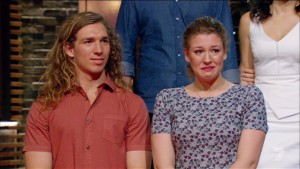 Tomorrow night:S It’s the semi finals, with the Sisters V Zana and Plus One. Surely the Sisters will ace it, although they’ve never been in sudden death, so that’s a disadvantage. We know from the ad some cracker dishes are served up and the Fass sing’s someone’s praises, so it must really be good.