I’m looking forward to seeing Jason’s reaction to the Scot blindside and Tai’s perceived betrayal. Will he keep his mouth shut and just moan to Julia or does Mark the Chicken need to fear for his life? 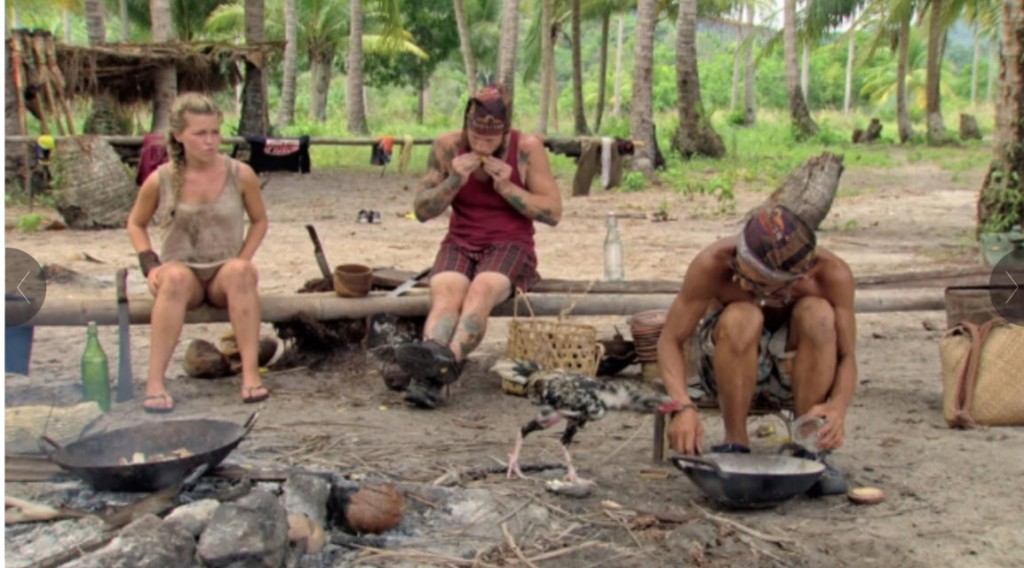 Over to guest recapper Rosie (thank you muchly):

And as usual we start after last week’s TC. Tai is happy that he has taken control of his game, after the tatty boys were talking over him. Yep, he sure showed them! Oh, that was such fun just to see the looks on their faces last week! He reminds them that it’s a game.

TBB (TattyBountyBoy) says they’ll never get rid of Tai now, and he hates it. Well, you should have played a better game, moron. He is upset that he lost both his partner and his idol. Oh boo hoo, poor wee petal.

Julia is also upset, but Tai reminds her that she wrote his name down. Heh. She is upset that Tai, Cydney, Aubry and Joe formed a secret alliance. Tai offers to explain why he voted for Scot, but she doesn’t want to hear it. I laugh. I laugh a lot while watching this show.

The next morning Tai speaks to TBB about the ousting of Scot. Gutsy feller! TBB says he understands why he did it, but tells us he can’t let Tai and the others see how angry he is and he wants revenge. Tai is worried that TBB will wring Mark’s neck. Um, I really wouldn’t see a problem with that, what with Mark being a CHOOK, who was given to the Beauty tribe for food in the first place.

In which they must race through obstacles, collect rings which they will then throw onto a hook. Which will be swinging, thus making it more difficult. The reward (Rosie’s eyes roll as usual when she hears: “Want to know what you’re playing for?” – I always want someone to say, “Nah, we assume it’ll be something good, Jeff, so let’s just get on with it.” :D) The reward will be a helicopter ride around the island, followed by a fried chicken picnic. They show the obligatory excitement.

But I forgot to mention the most important bit, and that is Jeffy’s hat. It’s the orange one – aka the favourite of our Juzzy girl!

They are playing in pairs, and seeing we are down to 7 players this week, one person doesn’t get to play, and therefore won’t get a chance at the reward. It’s TBB. Ha ha. But wait, I’m wrong. Michele and Cydney win, and they are allowed to take one other person – even TBB! But no, they bring Aubry! Ha ha ha ha ha! I laugh a lot. I should also say that for all my giggles I nearly forgot to add that Joe – yes Joe! – and Tai came very close to winning. Wouldn’t have ever believed Joe could ever come close to winning an actual challenge now, would you? Well he did. Come close that is. Didn’t actually win, of course. Let’s not get silly here.

Off to Reward where they enjoy their food, along with some wine followed by a rest in hammocks. How very pleasant. And naturally they discuss the game. Cydney and Aubry whisper together that Michele might be a better bet to take to Final 3 than Tai or Joe. But tonight they need to target TBB or Julia. I’m yelling TBB! Make it TBB! at my TV. Sadly they don’t seem to hear. *pouty face* At least they realise it will be too dangerous to take Tai as part of any Final 3.

Back at camp TBB and Julia realise that they need immunity. TBB thinks voting for Tai will work if they can talk the others into blindsiding him. They chat to Cydney about voting out Tai. She sees that as a win win for her.

This one is a water challenge, where they have to swim to a raft over an obstacle, memorize a bunch of symbols and numbers and get a combination that then gets them a word puzzle. This looks hard! Joe opts out, but I can hardly blame him. Eventually, Michele wins. Congratulations – that did not look easy!

TBB is upset that he wasn’t even close and can only hope that the others will vote for Tai alonga him.

Aubry and Cydney discuss whether to tip out TBB or Julia, and decide on Julia. Aubry says TBB will be polarizing for the jury, whereas Julia has no blood on her hands. Michele thinks this sucks. But she doesn’t say anything. There’s also talk about Tai, saying he can win this. Well, duh, he got out a huge threat last week, of course he can win this! At this rate, anyway. He is all worried, and decides to bring his idol to TC.

Michele tells Julia they are voting for Tai, and is hoping it will be true. Cydney may or may not be voting Tai.

Julia tells Jeff that Michele is the only person who can feel 100% safe tonight. Tai says he has his idol and his secret advantage. He wants to remind his alliance that there’s no need to shake the boat. TBB says he trusted his alliance and now Scot is out. (heh heh) He says Tai flipped like a flapjack twice on his alliance and it will happen a third time. Tai retorts that TBB and Scot were tight and in control. TBB says Aubry and Joe are even closer. They are? Joe? Really?

They vote. We see TBB vote for Tai, and Aubry vote for Julia. Well big deal, editors, those were votes we could have known were coming, so thanks for nothing. Tai is clearly worried, and whispers to Aubry should he play his idol this time. She thinks he’ll be safe but says it’s up to him. Jeff counts the votes and calls for any idols. Tai leaves his in his pocket, but looks worried.

And here are the votes: Tai, Julia, Tai, Julia, Julia, Julia. Everybody wave bye bye to Julia! Michele gives her a hug before her torch is snuffed and she (Michele) has a bit of a cry. I must say TBB and Scot both look a bit cross. I do think TBB is pretty jolly lucky it wasn’t him. In fact, since he didn’t win immunity, and doesn’t have an idol, I don’t for the life of me understand why not. I know Aubry felt earlier that TBB couldn’t win, but he can also go on an immunity run. Me, I’d have voted him out soonest. Maybe next week?