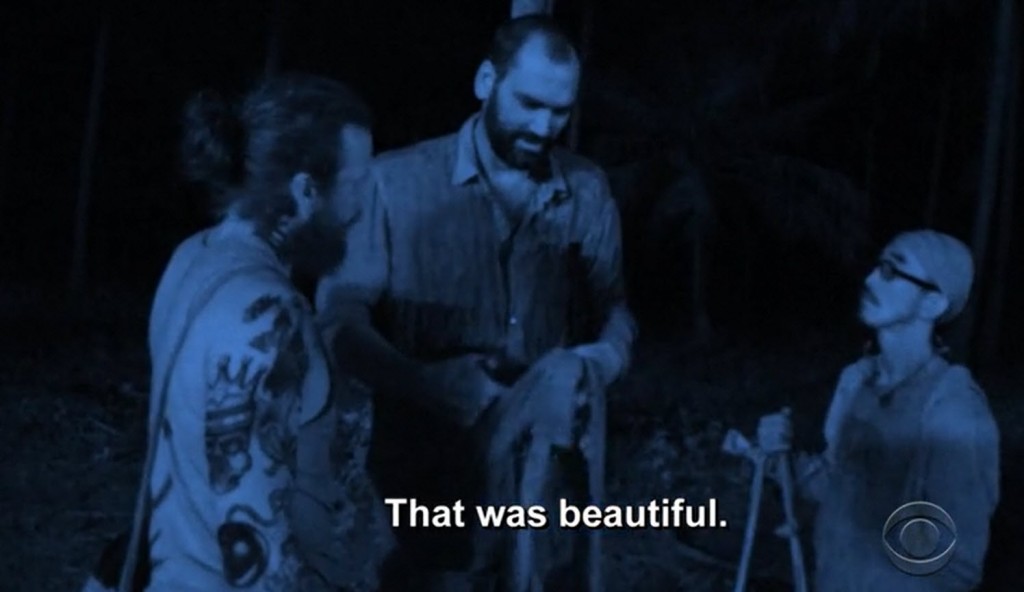 Debbie of the many occupations has just been blindsided by her alliance, and while Scot is a tad disappointed Cydney did not go home, he is thrilled “they ate one of their own”. Tai hands the idol back to Jason – darn it. How fun would it have been if he’d hidden it somewhere instead.
The next day Jason is thrilled their sooky lah lah tactics of hiding the machete and dousing the fire worked to crack the majority alliance. But Tai thinks it’s time to stop the shenanigans – perhaps he’s thinking of jury votes, which neither Scot nor Jason has mentioned. 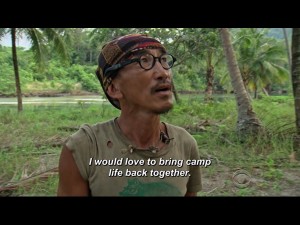 Scot says he wants to mend fences but he needs “assurances from Aubry”. So she’s obviously the acknowledged leader of the tribe. An then he says he never wanted to be the “Russell Hantz” of the tribe. Too late, Scot – you must be the tallest Hantz ever, though.
He graciously offers to return to “providing” for the tribe in return for traitor Cydney’s head. 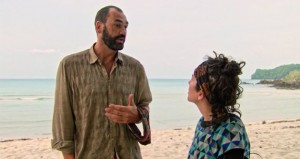 And I want pizzas for everyone, a gym bag full of unmarked dollar bills and a plane to fly me to Mexico. Oh and a new tattoo that say “Jason forever”

He tells confessional the other tribe does not realise Cydney is “brooding,petty, small”. Hello – pot, kettle! How is Aubry going to handle this blackmail?
“There is not a shot in hell I am going to work with them,” she tells confessional. Hells yeah, Aubry! “But I’m willing to let them think I’ll play along with it.”

Reward challenge time
Orange cap Jeff explains it’s a terracotta pot balancing change. The prize is a burger meal or letters from home. Or, Jeff casually reveals, an advantage. But the further twist is they will only be competing against people who choose the same prize. In the past having the advantage has not worked out well (it made Fishy and Dan the unbearable postman targets).
Going for advantage are Tai, Cyd and Aubry.
Food is Scot, Jason and Michelle.
Letters is Julia and Joe.
If they do this again they should keep what everyone picked a secret, so a player could be potentially balancing for hours against an imaginary opponent. 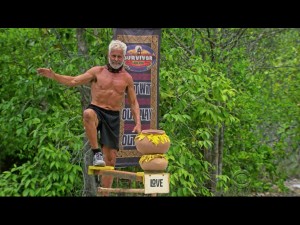 Joe looks shaky and he is first to fall, so Julia gets her letter. Michelle beats Jason and Scot to take the burger meal – good one, Mich.
Tai is a picture of stillness as he and Aubry are the final two, battling for the advantage. 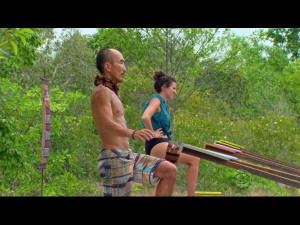 At just over the 10-minute mark, while Michelle is still chowing down on her burger, Aubry’s pots fall and Tai gets the secret scroll. Well, that was quick.
Tai reads what the advantage is and it’s … oh …an extra vote. Same as the last two times. Anyone else disappointed? (Some history on extra votes here Extra Vote) 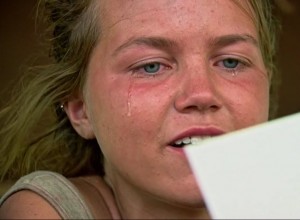 Julia was smart choosing the letters prize, knowing not many others would.

Julia, Mich and Aubry take a walk and the former Beauties are keen to flush out an idol by voting for Tai, knowing they’ll be safe as the Sookies will vote for Cydney. Will Aubry come up with a plan to save her new BFF? 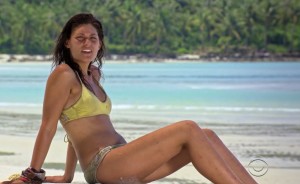 Michelle is getting a tonne of beach confessionals lately. Winner/narrator edit?

Aubry secretly thinks Julia is a sneaky sneak – too “super shady” to be sitting next to at the end of the game – and that Michelle has no idea that Julia is just waiting to turn on the girls. 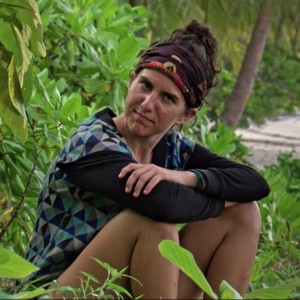 It’s Day 27 and Aubry approaches Tai on a level she knows will appeal to him, talking about the struggle between the barin and the heart. And he’s listening.
He tells confessional: “My heart say: I like that girl Aubry a lot. She has the certain energy I really like.”
Aubry tells him he is being targeted and that she’s willing to feed him info to show her loyalty to him. Tai thinks the Sookies will be delighted to have Aubry on board. Poor, tree-loving Tai. 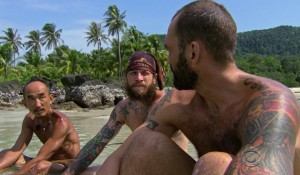 Of course Scot immediately wants to target Aubry and Tai is not happy he has no say in this alliance – not that he tells the Sookies.

It’s immunity challenge time and blue cap Jeff talks them through an arm-stretching challenge that involves yet more pots. Does Probst have shares in a pot company? Joe is first out again. He could make final three, as no-one sees him as a threat. 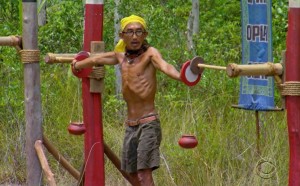 Tai is looking almost as skinny as Debbie.

After 45 minutes we’re down to Aubry, Cyd and Jason.

Cydney goes and then Jason does a Keith Nale-style spit, which Aubry mimics. Love it. After 1 hour and 15 minutes they are both still hanging on for dear life. 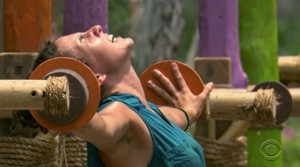 Aubry, if you don’t win you are a dead cert for the next Second Chance.

Sadly social media expert Aubry is just outlasted by former soldier Jason after a valiant effort. So Jason has the immunity necklace plus his idol and Tai has an idol, so they can target Aubry safe in the knowledge they can use a super idol after the votes are read if Scot or Tai is targeted. Well, that’s the plan. I really hope everyone actually votes for Scot and Tai refuses to activate the super idol to save him.
Julia tells the boys the plan is to pile votes on Tai to flush his idol, and they respond with promises of cutting Tai’s throat in the future so she can be an honorary Sooky in the final three.
Aubry checks in with new BFF from last week, Cydney, who wants to target Scot. 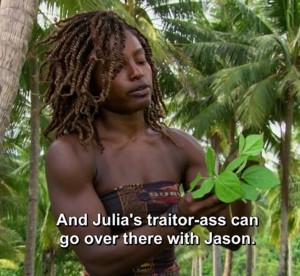 Why couldn’t we see hilarious Cyd at the start of this season?

Aubry vows to try and sway Tai: “Tai’s natural state isn’t with Jason and Scot.”
The next scene is of her crouching in the long grass, talking to Tai while he pretends to look for coconuts. Where’s a Tony spy shack when you need one? 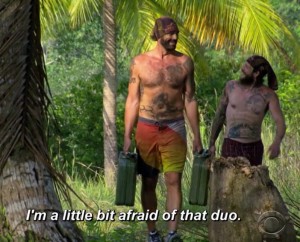 Tai doesn’t want to be a life member of the Tattooed Brethren.

Tai gives a lot of thought to Aubry’s pitch about making a big move, but has to weigh it up with knowing he would kick Jason and Scot’s asses if they were final three together.
So at this stage it looks like Jason and Scot will vote Aubry; Julia and Michelle for Tai; Cyd, Aubry and Joe for Scot and Tai for, hmm, maybe some random vote.
Before tribal, Jason hands his hidden immunity idol to Scot. We get lits of shots of Tai looking pensive, and then he says: “I’m not here to make good friend; I’m here to win that million dollar.” 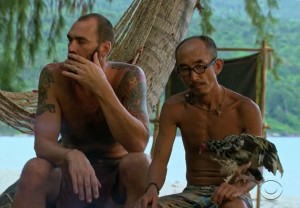 Well, you did make one good friend, Tai.

It’s tribal council time. Will we get more Chinese whispers tonight? The trash talking from Jason and Scot continues and Jeff of course spots that Tai looks awkward about it. Tai says it’s not how he conducts himself in his personal life, but this is “war”. Jason is confident of Tai’s support: “He has stepped up for our alliance time and time again.” Jeff gives Aubry props for her effort today in the challenge and she says she was spitting “like a deranged llama” (perhaps we can ask Chaos Kass the llama farmer what that would be like). Jason praises her, too, and makes it clear everyone should be voting Aubry because she’s a threat. 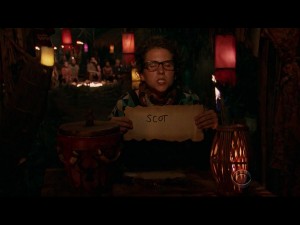 Time to read the votes … But first, does anyone want to play a hidden immunity idol? And here come the whispers, all aimed at Tai. 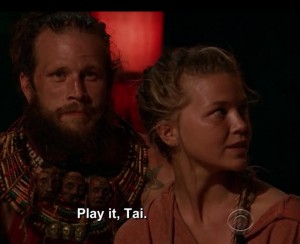 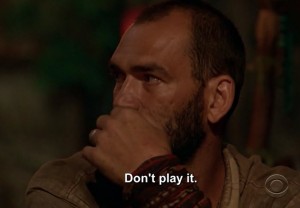 From Scot, after the tiniest of “no” head shakes from Jason to Tai. 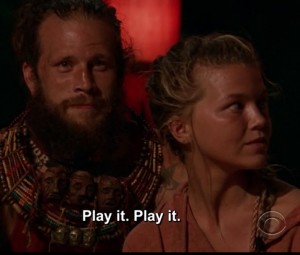 Julia’s not giving up. 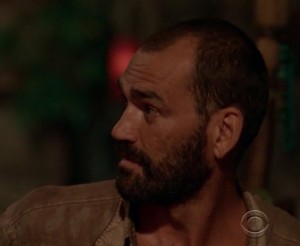 These raised eyebrows mean you should give me your idol, Tai.

Over on the jury, Neal and Nick know what’s going on, and are enthralled. 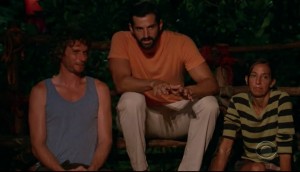 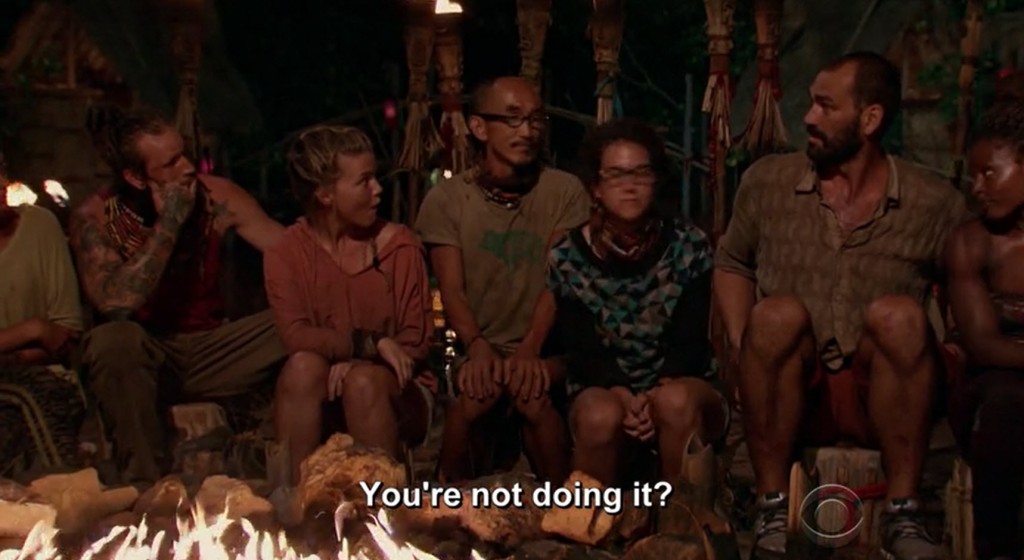 Look at Julia’s face! and is Aubry praying? 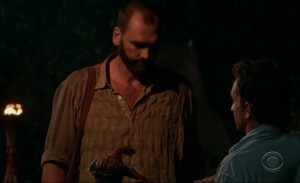 Best snuffing out of the season.

Kudos to Aubry for working out how to speak to Tai on his level, and for sending Scot home with Jason’s idol in his pocket.

Preview for next week: Tai is happy; Jason wants revenge (just hide the machete again Jason – that worked so well for you last time). And this: 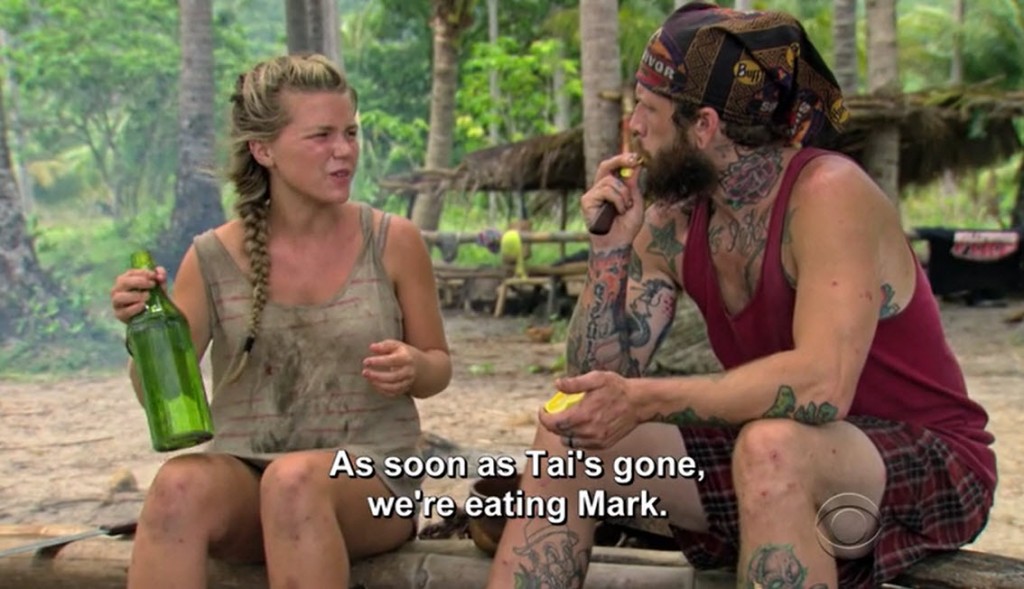 Survivor, you can’t kill off one of your most popular characters. #SaveMarkTheChicken