Please, please let Aubry survive and Jason get blindsided. Wishful thinking, I’m sure.
Rosie will kindly be doing our recap as my household now has more infections than a Kaoh Rong beach.
In the meantime, who do you want to win and who do you think will win?
Here’s a pic from first two minutes. The hairdo makes Jason look even creepier. 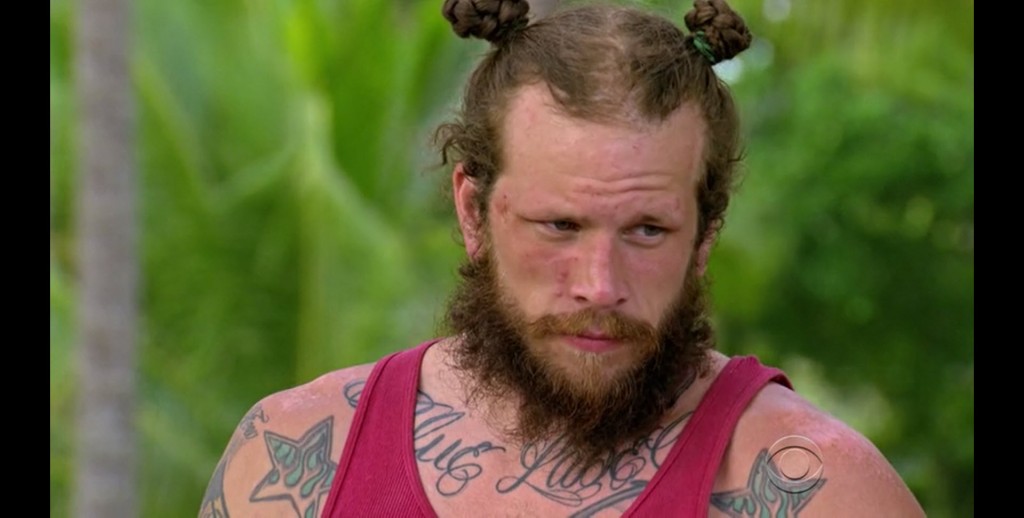 When you’ve found all the idols all that’s left to do is play hairdresser.

Meanwhile, creepy old TattyBountyBoy (let’s call him TBB tonight) is feeling powerful indeed, and thinks all the Brains need to go. Creep. Well, I suppose if you don’t have any (brains) yourself, you don’t want any remnants of a tribe made up of them hanging around to remind you of that fact…

Aubry is well aware that the pretty girls are going to get ahead and she ain’t one of them, so she is in trouble.

And our resident creepo, TBB, is playing the, “My daughter is autistic” card for all his worth tonight. Her care is expensive, so the rest of the family live in poverty to pay for her care. So you HAVE to hand him the million dollars, y’all! You gots to! I mean, nobody else deserves it!

They divide into two teams (off camera) and the reward will be ice cream! Amuses me that ice cream boy Neal was medevaced out last week. I bet he’d be thinking his is better than this. 😀

Onwards. Aubry is the captain of the team with Cydney, Michele, Joe and Jason. The other team consists of Nick, Debbie, Scot and Tai, with Julia as their leader.

They must transfer one team member via stepping pole thingies from one platform to another. Then they’ll all swim out to a tower. First team to have all five members stand on the top deck for a few seconds will win.

Bla, bla, bla, Julia’s team wins. Because poor Aubry and her team were completely hopeless. She knows she is going home now and is a bit tearful.

TBB acts like the creep he is and, since they are having their ice cream at the beach with the others nearby, tells them to make lots of noise about it.
So Scot now tells HIS sad sob story. Apparently his family struggle for money because his mother is in a nursing home and, and, waaah! I doubt his family struggle all that much somehow when I think of the amount of money he made in his professional life.

While Nick and TBB are alone they start talking strategy. The chaps think there might be an all girl alliance, but Nick doesn’t think so.

Nick walks off with Julia and asks her if the women talked any strategy today. She says no. Cydney then tells the guys that Nick is talking game with Julia and they should be careful. TBB dobs to Cydney that Nick was saying that there is an all girls alliance and she is pretty cross about that. The plan is to let Aubry go, but if a guy has to go, Cydney is prepared to vote one out.

[No Orange Hat for Jeff this week, probably because he somehow knew that Juz wasn’t going to be able to write this recap. Heh.]

Jeff knows it’s going to be a long ‘un, so starts tempting the Survivors with food. But what’s this? Poor Julia falls off just seconds before the food arrives, not that we know whether or not she’d have stepped off.

Jeff brings pizzas (although those Survivor pizzas generally look pretty yuck to me ;)), drumsticks (and no, not the ice cream ones, the part of a chicken ones 😆 ), brownies – now we’re talking, hot dogs (also unappealing to me) along with cold drinks.

He only gives them 10 seconds to decide. That’s not long, Mr P! TBB, Scot, Michele and Joe take the food. That’s a hell of a risk if I may say. At least TBB has an idol tucked away, but the others don’t.

Debbie is down, followed by Aubry then Nick. Nick talks about going to his first ever TC tonight and says he hopes it won’t be bittersweet. Scot reassures him that it won’t be.

40 minutes have passed, and it is between Cydney and Tai. Tai appears to be in pain while Cydney seems to be stoic… until she drops. It must have been the chanting Tai was doing to Buddha that did the trick! Tai wins immunity! Well done, sir!

Nick thinks the vote will be split between Aubry and Debbie. Personally, I’d be more than happy to see the end of Debbie. But the women say they want to take Nick out. Ooh! But Michele is not on board, so who knows what will happen?

This is Nick and Michele’s first TC, so they must get fire because fire represents life bla bla. Who me, roll my eyes?

And here is Neal, first member of the jury. I’m just surprised he’s not surrounded by doctors, nurses, oxygen, IVs etc. He just has the one wee dressing on his knee. At least James had an IV.

Debbie announces that the Brawns and Beauties have merged and the Brains are on the outs. All together now – aww, poor Brains. For a team called Brains, they sure are stupid. Tai talks about the possibility of a super idol, to the surprise of some of the Julia. Why would he mention it? Little man, little brain? Debbie points out that someone has to be at the bottom of the alliance.

Debbie says that she still has hope, while Scot says the votes will go as predicted. There will be no blindside. I cross my fingers in desperation.

They vote. No one plays an idol.

And the really sad (I do have feelings, honest!) thing is that Nick won an immunity idol last week, that went unused. Ah well, that’s the way the cookie crumbles.

But one more thing, as blindsides go, yes, Nick was blindsided (which was wonderful), but it could not have been more obvious to us, the audience, unless they had had big banners up around the place screaming that Nick was going home. But even Nick might have guessed then. 😉