And it’s time for the second chancers to cook. I was pondering how many contestants last year who were second chancers actually made it far into the comp, and thanks to Wikipedia, I now know this:
Auditions Part 2 – Sixteen second chance contestants were given the chance for the nine remaining spots in the Top 24, in a two challenge rounds. In the first round, an Invention Test, contestants had 75 minutes to cook a savoury dish from their choice of three different world food markets. The 8 best dishes won their makers a spot in the main competition. James’s dish was so good that he received an apron during the tasting. The other seven contestants receiving an apron were Georgia, Mario, Billie, Andrea, Jamie, Amy and John. The remaining eight contestants faced a Pressure Test set by Shannon Bennett for the one remaining spot in the Top 24. They had two hours to create his layered Warm Chocolate Orange Mousse, with a number of technical elements including tempering chocolate. Rose’s version was declared the best and she won the last apron.

So, winner Billie and Gary’s fave, runner-up Georgia. Speaking of Georgia, check out this recent pic from Facebook. She looks very different to her frazzled panda eyes MasterChef days.

DAY TWO
There are 11 contestants and five aprons. Four are up for grabs today. Losers go to a pressure test tomorrow to fight for the final apron.
George: “Flavour, passion etc.”
Each person gets a basket with 10 fave ingredients they supposedly use all the time at home. They only have to use one thing from the basket – boring – I like it when they have to mix weird stuff together.
Harry, bartender with the weird hair, catches his own seafood near Magnetic Island. He’s a veritable Ozzy from Survivor. He’s making lobster with some spicy flavours. So, Harry got airtime so he’s either amazing or appalling.
I like graphic designer Jordan’s honesty: “My favourite things probably aren’t the best to cook with – more just to eat as a snack.” They include oreos, apples, feta, prosciutto. She loves desserts but decides this is the perfect time to do savoury, with egg yolk ravioli. Yeah, don’t play to your strengths when you are trying to get on to MasterChef.
Our park ranger is making a spicy pie but he has Gary wincing when he says he’s not going to pressure cook his meat. He changes his mind but it makes me think Miles does not watch the show.
Snapper lady is a dab hand at filleting a humungous fish while coral top lady is a dab hand at Frenching lamb ranks.
Poor Jordan has stuffed up two batches of pasta dough. Make something else, Jordan! No, she keeps going even though she now only has one egg left for the filling. So it will be one ravioli
Adam from SA (go SA!) grew up on a chook farm, so he’s making roast chicken and chips with a mushroom medley. He wants to win one of his fave things, which is tinned stock powder. They blur it out but it looks like Vegeta. Don’t let the door hit you on the way out, Adam! That stuff may fly on MKR but not here.
HR person Sarah is doing beef cheek with pasta but she doesn’t have tomatoes so she’s using apple instead. That’s going to be beef with stewed apple. I want to see a picture of everything else in her basket so I can figure out what I would have made.
“I’ve spent a lot of time Frenching,” says Elise AKA coral top lady. Ooh, have you? She lucked out with some decent ingredients that complement each other – I reckon she took a punt they could be used for an invention test.
Vegeta dude is chastised by the judges and has a d’oh moment. Miles the ranger is happy with the flavours of his pie but he’s lining quite a large tin – will it cook in time?
As usual there are people in the room who are invisible, although we get glimpses of other raviolis.
Apple beef cheek girl thinks her dish stinks and she doesn’t want to serve it. She fell into the trap of thinking she had to serve a protein. Matt goes over for a pep talk and who wouldn’t be cheered up by a six-and-a-half-foot block in purple tartan suit and a cravat. Wisely beef cheek girl – Sarah – decided to do crepes with fruit compote.
Snapper lady Mimi looks like she knows what she’s doing and is getting a few confessionals where she has to explain the components of her dish. She’ll be safe.
Ranger Miles’s pastry is undercooked and he can’t get the damn thing out of a tin. He leaves it in the tin. The pressure test beckons.

The judges taste
1 Harry’s lobster with sambal and broth: “I think you’ve got some talent,” says Gary. It’s delicious.
2 Jordan’s egg yolk ravioli with basil oil: The music builds as Gary cuts the ravioli. Will the yolk be runny? Cut to ad break. Geez, never saw that coming. Yes, it’s runny. Gary appreciates the effort but they all think it needed more elements.

3 Mimi’s snapper with chilli and broth: This looks lovely and she’s done the trendy broth in a bottle thing. 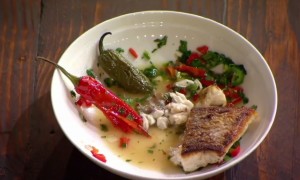 Give me that and a bowl of steamed rice and I’d be happy.

Matt thinks it’s a beautiful plate of food given the limited ingredients she had. She’s one to watch. We get a lovely closeup of George’s sweaty head. Gazza hands her an apron on the spot – after Matt does the obligatory fake “ponder”. Well done, Mimi.
4 Invisible Lauren’s beef with eggplant puree: Beef good, not so the raspberry “gastrique” (which Google tells me is a fancy name for a sweet and sour sauce). Hopefully there’s not too much gastric on this season.
5 Invisible Molly’s salmon tartare: Good but too rich and lacking freshness
6 Invisible Melissa (older lady with the funky headscarf) fennel and salmon ravioli: George damns her with “It needs … flavour.” There’s no sauce. He uses the word “lubricate” and it sounds so wrong.
7 Invisible Jenny (or is it Ginny?) has managed to serve up multiple ravioli: Ricotta and orange rav with a lentil orange salad. She confesses she thinks Gaz “has got pretty eyes”. Argh.
8 SA boy has served his chicken and chips sans stock powder. He gets the thumbs up from Gaz.
9 Beef cheek apple girl Sarah-turned raspberry crepe girl: George commends her for putting up a dish. The crepe is fine and they’re happy she learnt a lesson.
10 Park ranger Miles serves up his stuck pie: George tries to prise it out of the tin and manages to get it out in one piece. Gaz has to eat humble pie and says it’s tasty. Matt loves the flavour. George says it’s hugworthy.
11 Elise’s pistachio-crusted lamb with parsnip mash (continuing the theme of MKR where everyone did parsnip mash): Elise is one of those weirdos who loved the pressure of the challenge. Gaz loved the lamb (which actually looks super rare). They liked her Frenching skills.

The other aprons go to: Elise for the lamb, Harry (who reminds me of last year’s winner, Brent) for the lobster and Adam the chicken man.
Tomorrow night they’ll do battle for the final apron. So, based on tonight’s air time, does it go to Sarah or Jordan. They have to recreate a Shannon Bennett dessert, so I know many of you dear readers will be delighted to see you favourite MasterChef regular on the tellie again.