TV blurb says: The top three contestants from the invention test must make a filled pasta with a matching sauce. The winner will then enter a cook off for immunity against guest chef, Jake Kellie.

Filled pasta? More bloody ravioli! I hope someone at least does tortellini. An no more slow-cooked egg yolks. I’m going for Olivia, just because she didn’t exist until Sunday night.

No internet or recording for me tonight (new floorboards for us tomorrow so all the furniture, including the mysterious bits that run the Internet, are packed away) so I’m watching live and tune in late, just as Nidhi is stuffing up pasta dough, Olivia is shocking MPW and the lovely Shannon Bennett by making soda bread and Zoe is trying to cook huge chunks of pumpkin in too little time.
The gantry gawkers are freaking out that Olivia has not even put a pot of water on to boil, and after many shouts she finally tunes in to what they’re yelling.
No one looks to be on top of things.
So of course Matt Preston wanders over to watch Olivia’s pot to ensure it doesn’t boil.
Zoe makes her pumpkin and goat’s cheese puree for her filling but it’s too cheesy, so she adds honey. Nidhi’s pasta has barely rested and her shapes look haphazard.
While she’s waiting for the water to boil Olivia blitzes up her soda bread to make crumbs for her dish. With only a few minutes to go she chucks her pasta in anyway and hopes for the best.
Nidhi knows her pasta looks a bit dodgy but she hopes her big fan Marco loves the flavour. Olivia’s pasta looks delicious but she’s made the fatal mistake of not enough brown butter soz.

Such a fun cook, even if I did forget my water 😳 well done @ZoeKonikkos! pic.twitter.com/6Alz7ii1it

Judging time
Olivia is first and the judges look sad at the bowl of crunchy goodness as there’s no little jug of soz in which to smother it.
MPW says it like looks pretty. Shannon says the ravioli is nice but there is a slight greasiness. He likes that she made soda bread. MPW is very complimentary, apart from the soz issue.
Matt says Nidhi’s pasta is too thick and MPW says it’s not her best dish.
Zoe must have this in the bag, surely. It’s a similar dish to Olivia’s, with walnuts instead of breadcrumbs. “I love it,” says Matt. She has enough butter sauce. “Delicious,” says MPW.
Zoe wins and will cook for a chance at the immunity pin.

Immunity challenge
Who is the guest chef? Jake Kellie, who’s the current Young Australian Chef of the Year. He’s only 24 but has worked for several top chefs, including Heston at The Fat Duck. 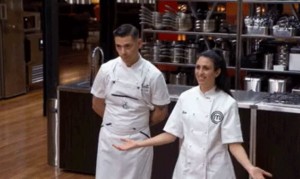 Zoe’s going to need some ink if she wants to be a chef.

Zoe gets 75 minutes and gets to pick the pantry while Jake gets 60 minutes. The pantries are French or Italian.

Which pantry would you pick… Italian or French? #MasterChefAU pic.twitter.com/zpNfmUZrHI

I’m thinking she’ll do the latter given it’s more similar to the Greek cuisine she’s used to. And, yes, she wants those figs so picks Italian. She is doing a creme brûlée with mascarpone ice cream and Shannon is there to whisper sweet nothings in her ear.
Jake doesn’t even get to watch her start – he’s shoved off to the side behind some fruit and veg.

Finally he gets to cook and is doing veal carpaccio with a twist – he’s hiding beans and other veg under a thin layer of veal that’s just been torched, with a burnt butter emulsion. Sounds odd but he has a very tight, controlled and organised look about him, in addition to obligatory chef skinny jeans and sleeve tatts.

Rather than baking her brulee in the oven, Zoe is setting it with gelatine and popping it in the blast chiller. Shannon is happy with her ice cream flavour, so that’s a good sign.

He microwaves olives for three minutes to dry them out and chop them into crumbs – I love it when chefs use a microwave. He’s good at explaining to the onlookers his cooking process and has time to pop over to Zoe’s bench to check on her.
Then he plates up with those long tweezers that must be made for chefs and it’s a gorgeous little pile of beans, olives and mayo. And then he drapes it all in a glossy square of raw veal brushed with tomato oil. Looks weird but oh-so-interesting.

Zoe is happy that her creme brulee is just set but then she has to torch the sugar and she’s worried the heat has melted the gelatine.

Time to judge
The veal is dished up and the judges aren’t sure what to think, but they’ve got to know straight away who made it. “It’s two surprise in one,” says MPW, but he thinks he would have shown off the beauty of the vegies. “I like the shock value of it.”
Gaz thinks it’s too mayonnaisey. George and Matt want more acidity.
As Zoe’s brulee is served with her figs and divine-looking ice cream on top, it starts to ooze. it hasn’t set. It’s not a good look. The judges decide it’s custard with figs – but still very tasty. MPW reckons it was a confusing tasting. It didn’t help Jake that the judges didn’t cut into it, as intended, to reveal a peek of the vegies underneath, but just disassembled it.

Tomorrow night it’s a pub food challenge in a real restaurant and the ad shows Marco having a go at tall blond Harry over a fish problem. Hopefully it’s a beat up and Harry saves the day, as he seems to be a good cook. Plus he just tweeted this:

Is it just me or is @KellieJake particularly handsome…? I'm struggling to focus on his cooking! 🙊🙈🙉 #MasterChefAU