It’s Wed night and it’s still Marco week on MasterChef. Yippee!
TV blurb says: This challenge is all about the pub lunch. The contestants are split into two teams and must cook three courses for 70 people with Marco Pierre White running the pass.

So, expect lots of “Yes, Marco!”, undercooked fish and tears.

Here we are at the first service challenge of the season: a pub challenge. Luckily Brett’s food dream is to run a gastro pub in the country. Thank god they reminded us he’s an airline captain, otherwise I would have thought he was a member of the crew who’d accidentally wandered into camera view. 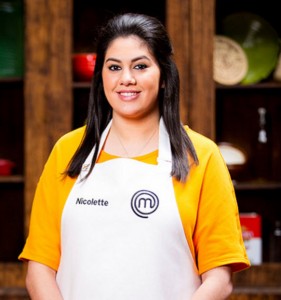 The captains have to lucky dip for the type of dish. For entree Nicolette gets something crumbed; Brett something skewered. Main for Nicolette is surf, so Brett gets, you guessed it, turf. And dessert is cold and hot.
They have to serve 70 people, so 210 plates, which is a lot.
They cram into the pub kitchen and Brett’s team is quick to pick dishes, guided by Captain captain, while the blues are just a mess, yelling out ideas. On red, Elise and a mystery girl have to peel 240 jumbo prawns, so they got the short straw there. Red’s main will be sirloin steak with jus, so MPW drifts by with the astonishing advice to put a wet dishcloth under a chopping board to stop it slipping. Give that man another Michelin star!
Finally blues decide to do a panko prawn – which Cecilia had suggested yonks ago but her voice was lost in the din – but blue has nabbed all the prawns. You snooze, you lose, reds. Instead they’re doing crumbed scallop with corn puree. Main will be crispy king fish with roast spuds and a beurre blanc and dessert is another bloody panna cotta.

MPW is not happy with blue Nicolette’s idea to serve only three scallops: “Generosity is the greatest garnish in the world.” Quick – print that on a T-shirt.
Brett tells red underlings Jimmy the Brother and Nidhi to remove all the fat from the sirloin – this is going to lead to trouble.
On blue, they’re prepping the kingfish and MPW is not impressed with Intense Matt’s pinboning efforts. He fishes out a bone: “That’s big enough to choke a donkey.”
Reds seem to have it together, being efficient while having fun in the kitchen. Olivia (well, I think it’s Olivia – MasterChef really needs to make them wear aprons with emboidered names), Carmen and Charlie are on dessert, making a warm brownie.
On red, Heather – nice to meet you – is in charge of the jus for the steak but MPW says, while it taste great, she needs heaps more. Heather is dying inside but trying not to show her fear in front of MPW. She has enough for one tablespoon per person. That’s not much jus for a steak.

Service starts
After a quick pep talk from Marco, the yelling begins as he mans the pass. Did anyone else here him say: “Be the wolf pack – work as a team.” What is this – a Hangover movie?
The red team’s massive prawns on skewers look amazing but poor Jimmy is freaking out at the grill as MPW barks orders at him. Blue’s scallops could do with a scatter of micro herbs.
The judges: They like the charry look of the prawns and Gaz gives the thumbs up as the happy music plays: “They’ve done a smashing job.” Matt loves the remoulade and that the dishes look consistent.
The blue team’s scallop cookers are having trouble keeping up with Dementor shrieking orders at them and Ranger Miles concedes some could be a bit under or overcooked.
The judges: George thinks four scallops is still not enough for a pub meal and they are overcooked. Matt says reds won the entree round.

Main courses
Captain my captain Brett is in charge of grilling the steaks, while on the other team Harry is doing the kingfish and he’s flustered because people seem to think it takes 10 seconds to cook crispy-skinned fish. MPW is barking away like a mad dog at the pass.
Blue Con – keen to redeem himself – has pretty much taken charge of the dessert. He thinks it’s a bit sweet so is whipping up a lime gel to add acidity.

The judges: Immediately comment on the paucity of jus with the sirloin and George is devastated they’ve removed all the fat. (Jimmy was right but he followed captain’s orders.)
Meanwhile, there’s a crisis in the blue team, with not enough fish to fulfil the orders. Surely they counted the portions earlier? What was that challenge last year where a team came up short of dishes in the dessert round because someone put a tray of something on top of a fridge, then no one realised it was there – except the chortling camera operator. Perhaps this is one of those moments where MPW plucks a number out of the air to put the wind up them for not doing extras.
He tears into the kitchen screaming poor Harry’s name, and Harry’s defence that he allowed for extra portions is brushed aside as MPW interrogates each member of the team in case they’ve stuffed a fillet down their pants as a lark.
“They just swam off, did they?” MPW asks. Luckily Ranger Miles dives into the pantry and finds a stray fish which Harry can then fillet, resisting the temptation to slap MPW in the face with it instead.
The judges: Love the fish and declare it the winner of the round.

Dessert time
The brownie leader (I think Marco called her Chloe) is confident in her baking – even as she quakes before MPW’s steely gaze – while Con is also happy with his panna cotta.

Marco PW may seem scary…but he is such a genuine and caring person. #MasterChefAU pic.twitter.com/F6WBmc03Wc

The judges: It’s a choc brownie with a walnut caramel sauce and Gaz is in heaven. It’s moist and fudgy. Gaz thinks it would be a best seller if it was a regular on the menu. Well done, Chloe.

Con’s panna cottas with pineapple, sago and ginger crumbs are nice and wobbly and it’s a more modern-looking dessert than the brownie.

George thinks it’s elegant and Matt loves the contrasting textures.
So, the judges think dessert will decide the winner, but both are good. I’m wondering if the brownie will get the edge, as it’s more pub like?

Time for feedback
MPW tells them how wonderfully they did, they performed better than some professionals, yadda yadda. As we already know, prawns get the thumbs up, scallops sucked; steak is a no, kingfish yes.
Reds get high praise for the brownie while Matt drools over the panna cotta, saying it’s his dish of the day. Just as they get their hopes up Gaz butts in to say the prawns were his and Georgie’s dish of the day, so reds win.
Perhaps next year there should be a judges’ save (like the Tim Gunn save on Project Runway), where each judge gets to save a contestant who’s on the losing team but has done really well, such as Con with his panna cotta tonight.
Apologies to those contestants whose names I mixed up – I was watching live and couldn’t pause anything to cross check. If some of you could shave your heads or wear weird earrings like the boys do, I would appreciate it.

Tomorrow night: It’s the pick a letter, name the ingredient challenge. This should be fun to play along with at home. Will Z be anything other than zucchini?