TV blurb says: The contestants from the losing pub lunch challenge team must correctly name an ingredient to avoid the elimination cook-off challenge, as the contestant with the least impressive dish will go home.

We know from the preview it’s an alphabet challenge and there were some tricky ones shown. I wonder if they get to taste them to help? What will X be?
I like these name-the-ingredient contests, except when someone bombs out early and we don’t get to see what all the other ingredients are. Wonder if they have to cook a dish with all the correctly named ingredients?

I’m watching on TenPlay the morning after (so annoying not being able to skip the ads!), so just a few thoughts.

Matt’s wearing his light blue/grey picnic tablecloth suit again, with a pink floral cravat for a pop of colour.

Matt goes on and on about how the challenge will work, just to ensure the contestants are absolutely packing death over which letter to choose.
Ranger Miles is first and he’s lucky to get an easy one: Basil. Then it’s Anastasia’s turn – wait – who?

I have totally been here the whole time – I swear.

D is for Dijon mustard. Intense Matt gets a liquid which he confidentally announces is mirin, while Con – who produced that great panna cotta and sago dessert for the pub challenge – picks C for celeriac. Are they choosing based on their name initials?
Adam picks R and it is the red, spiky fruit rambutan, but he does not know it. “Its always a tricky one,” says Gaz, not hiding the glee in his voice.

Sadly, lychee does not start with R, Adam.

Poor Adam is the first person sent to stand in the area for condemned prisoners.
Zoe of course chooses Z, playing strategically, and it pays off because it is indeed zucchini. Cecilia is L for lamb; Harry T for “toona”; and Trent the blond electrician G for green tea.
Olivia picks F and it’s a brown rice-type grain that thinks it is farro but is not sure, so George freaks her out by asking if she has heard of freekeh. But it is indeed farro. (Wikipedia says: Farro is a food composed of the grains of certain wheat species, sold dried and prepared by cooking in water until soft, but still crunchy (many recommend first soaking overnight). It may be eaten plain, though it is often used as an ingredient in dishes such as salads and soups.)
Everyone’s now had a go so it’s back to Miles again: H is for horseradish. Anastasia: Nutmeg. Matt: Sage. Con: Kecap manis. Zoe: Quail. We’re getting lots of voiceovers from Cecilia about how scary it is, so of course she’s going to bomb. She picks J and it’s some weird bulbous vegetable that she has actually cooked with but doesn’t know the name.

J is for jicama. That was tough.

Good on you, mysterious Anastasia, for knowing these are Inca berries.

Poor Intense Matt gets the only cloche left: U. 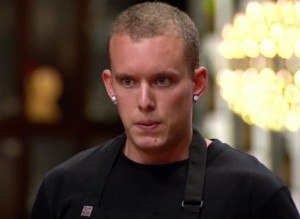 Matt is in Freak Out City. 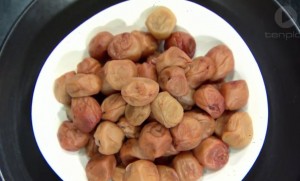 What the heck are these?

Matt goes out on umeboshi – a Japanese plum. No shame in that, Matt.
So that makes three. Matt should be safe – he has proven to be inventive and a good balancer of flavours.
Oh – but that is not the end. I missed the bit where they said four people would go through to elimination. They bring out a second batch of cloches and Harry is up first. C is for … I am thinking crocodile, which MC has used in a previous season, but Harry looks spooked. He says “cod” but it was in fact croc.

Elimination round two
They have 60 minutes to cook and they can used the 23 ingredients correctly named, plus the usual staples.

Matt is doing quail with celeriac and chargilled zukes. His “food dream” – take a drink, everyone – is to start a food truck. That is definitely achievable.
Adam is doing a type of mixed grill with zukes – hmmm – and Harry a Japanese-inspired smoked tuna with celeriac -yum. He is showing technique by using the green tea in a smoking gun.
Back in black, Cecilia is again having trouble coming up with a dish but at least she is doing vegetable prep rather than freezing like last time.
Gaz and George saunter over to make Adam nervous and tell him his idea for a dish is rubbish. 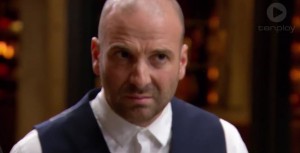 George is not happy about the lamb dish – and the fact his shirt is buttoned to the top without a tie because they are trying to make him look hip.

At least George gives him lots of ideas as to what he could be doing with the same ingredients. Adam seems to be making the same thing but calling it a different name.
Intense Matt confides he has only ever deboned and cooked quail once – no doubt in preparation for the comp, which was smart.
Finally Cecilia kicks into gear and decides to make brined, smoked tuna with salad – sounds familiar.
There are “aarghs” from the gallery as Harry stuffs up his mayo in a food processor. Get the stick blender out, Harry. But, no, he does it old school with a whisk.
Continuing their trend of putting the wind up contestants, George and Gaz tell Matt the judges are hungry and need a second quail.
Adam is the only contestant using one of the unusual ingredients from the alphabet challenge; he is rehydrating the inca berries to use in his salad, which should impress the judges. But then he loses his mind under the pressure and tips cream into a pan full of lamb fat – nooo! Who was the guy who fried his ravioli? Adam knows he has stuffed it up.
Prompted by Con, Cecilia checks on her tuna and it is brown and icky. She has left it way too long. With just a few minutes to go, Marco comes over to chew the scenery and more of her thinking time. At least she then sears some tuna in the pan, so she will have a dish that would be made in 10 minutes instead of an hour. However, she has not tasted her mayo, so that will be an issue.

I have eaten seared tuna before but never cooked it. Hope this is good enough to stay. @masterchefau pic.twitter.com/yaCQyR4LmS

The judging
Poor Matt gets the teary quivers in front of the judges but you can tell just by looking at the plate he is safe. The judges love it.

Q is for Quail, Z is for Zucchini, B is for Basil. S is for Safe.

Next is Adam with his grilled lamb and zucchini. 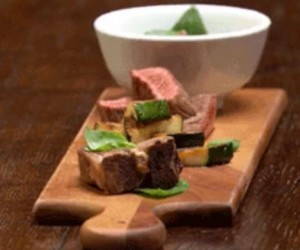 G is for Goodbye.

Gaz is not excited by the dish but Matt says the elements are cooked well and he likes the Inca berries and basil and globs of fat. But “not a disaster” does not keep you safe on MC.
Harry’s tuna dish looks tasty and he deftly defends his decision to serve the end piece of tuna to MPW with “that’s my favourite part”.

The judges like the dish and Matt backs up Harry’s decision to use the end piece. So, Harry is safe.
Which brings us to Cecilia of the lovely desserts and the stuffed turnip. MPW takes his glasses off for a serious chat about how awesome she is. Matt is puzzled by the yellow mayo but says the salad looks pretty. Gaz likes everything but the mayo, which is too eggy. We all know Cecilia isn’t going home yet – she’s had far too much airtime and is yet to have a chance to create a showstopper dessert by herself.
It’s bye-bye, Adam. Go home and enjoy cooking with Vegeta again. 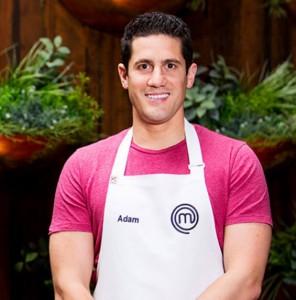 Here’s the link to Adam’s profile on LinkedIn – he looks quite different to when he’s in his chef clobber and has done some interesting stuff in his life which he didn’t hear boo about on the show Adam LinkedIn
Harry and Matt are looking like stayers but that’s the last challenge in which we’ll see MPW. It’s time for MasterClass and then it’s back to Blighty, presumably.

Masterclass
I’ll fast forward through this later – I can’t stand watching George with his tweezers faffing about. Oh, George isn’t there. Phew. MPW is showing them how to make the perfect risotto. Didn’t George do this when they went to Italy? Gaz will do pho, Matt is making a baked cheesecake (but will it be better than Mrs Duck Nutter from MKR’s?).

So, are we glad MPW is gone?