It’s the start of Marco Pierre White week, so I know some of you will be glued to the screen while others will nick off to another channel.
The TV blurb says: The contestants have 75 minutes to create a dish from Marco’s mystery box of ingredients with rewards and hazards for the top and bottom three.
I so hope that when he does his “Yes, Marco! Yes, Marco!” call someone responds with “Polo!”.

MPW enters and shakes hands with the contestants, who immediately go weak at the knees. Contestants will have 75 minutes to create something out of his mystery box of chicken, cinnamon, bacon, potatoes, lemon, parsley, olive oil and honey.

Judges are only tasting five dishes today. Winner gets an advantage in the invention test.
Intense looking dude Matt – he of the disc earrings – is doing a gnocchi and jus with crispy chicken skin. Marco tastes his jus as it’s cooking and gets the usual flick of the eyes over the bifocals.
Charlie – pro golfer with the nice hair who was in the bottom three last time but pulled through with his choc ginger whatsit – is making honey semifreddo. MPW asks if it will set, so it will either work spectacularly or be slop. Mimi, who’s been a strong contender thus far, is also making honey semifreddo. Uh oh. C’mon, surely someone is doing ravioli? No?
Cecilia – she of the brain injury – is freaking out and faffing around while everyone else is cooking frantically. She’s missing her kids and feels a bit lost. Fifteen minutes in, Gary comes over to prod her into action and he’s wearing his cranky pants. Finally she gets going to make a burnt butter ice cream because it’s something her daughter would like. She’s pushing it to get that set, even with a blast chiller.
MPW scares Con by staring at him until he redoes his ricotta.
Chatty Nidhi from SA is doing pepper lemon cream chicken with paratha and lurves MPW. She tells confessional: “He’s like a coconut – he’s hard from the outside but inside he’s really soft and a beautiful person.”
With 15 minutes to go we’ve only checked in with a few people so we knows already who’s being tasted. We haven’t even touched base with ranger Miles or the siblings.
MPW gives Intense Matt advice on turning gnocchi and uses his fingers, so Matt has to follow suit to show he’s cool, too. “Can I just say this is probably the greatest day of my life,” he fan boys to MPW as his fingertips melt off.
Cecilia is getting her act together, whipping up meringue and spun sugar to add flair to her dish but, sadly, the delay has cost her and her ice cream hasn’t set.
Time to judge
First up is Nidhi, who is delighted. Her dish looks rather beige so she is not a fancy pants plater like some, but it’s the dish she makes when she needs cheering up – given how happy she seems she can’t make it often. “And it’s full of fat – so I like it.” The producers must be so happy they cast her. “I 35 years I’ve been in this industry I’ve never sen a dish look like that taste so good – it’s delicious.”
Next up is Intense Matt with his pan-fried gnocchi with lots of crunchy elements. Gaz is in heaven: “Savoury, chickeny, bacony cereal.”
MPW loves the soz: “I don’t think that you realise how clever you are … genius in your hands.” Matt says it’s better than even his recent wedding day. Oh no he didn’t!
Mimi is praised for her cake and ice cream’s flavours but not her fussy plating. Cecilia is picked – well they have to, because they need someone to cry because her ice cream melted. Her plate looks full of complicated dessert techniques. “It’s like the lightest lemon meringue pie in the world,” MPW says. The melted ice cream still tastes good.
The last dish tasted is Charlie because there was no one else cooking, apparently. 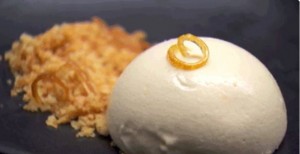 It looks so cute and simple, but inviting. Cue the dramatic music. Charlie is quietly cacking his dacks.
“This without question is the greatest dessert I’ve ever eaten in the MasterChef kitchen,” MPW intones, saying it’s Michelin starworthy. The violins are soaring; Charlie, consider yourself redeemed!
He’s the winner so gets to pick the advantage for the comp’s first invention test, so off they trot to the pantry and …

Invention test
… it’s meat galore and the dessert enthusiast comes plummeting back to earth. Oh, Charlie. Don’t you know ..
Cause you’re hot then you’re cold
You’re yes then you’re no
You’re in then you’re out
You’re up then you’re down
It’s a meat and three veg challenge. I like it. Charlie gets to choose beef, pork or lamb and three of about 10 veg.
MPW advises him to pick bones – that’s the beef, I guess – because they will scare most people and give you great flavour. Charlie looks freaked out, but having “bones, bones, bones” intoned at you by MPW in a voice from beyond the grave will do that to anyone.
Charlie ends up picking lamb, carrot, onion (spring onions, brown, white or red) and parsnip – bloody hell – everyone’s going to do the ever-present parsnip mash.
Intense Matt wants to do koftas but can’t find lamb mince. Dude, you’re in MasterChef – make your own! A fellow competitor kindly sets him straight.
Con is doing lamb two ways ( which just means double the chance to stuff things up) with parsnip chips and an onion custard – yes really.
Cecilia is making a parsnip surprise, which will be parsnip stuffed with the other elements because she thinks it’s something her son would like. The judges try to steer her elsewhere but she’s set on it.
Zoe – who had the multiple Greek grannies in her audition is doing a Middle Eastern lamb and smoked parsnip puree.
Nidhi is excited to but an Indian spin on classic Aussie ingredients with a lamb shank curry, but her idea to do a carrot dessert on the same plate is a worry.
Poor Intense Matt is having trouble with the fancy mincer. Maybe like me he just has one of the old school crank handle types. Can’t Gaz come and snarl at him how to use it properly?
Instead he uses some of the minced fat and some hand-diced lamb – good on you, Matt.
Charlie is in fact using bones to make a jus, as per MPW’s advice, to go with parsnip puree lamb backstrap. Boring but he just needs to not be the bottom.
Ooh, who’s this blonde girl making quinoa flatbread? Olivia the restaurant manager – how nice to finally meet you. 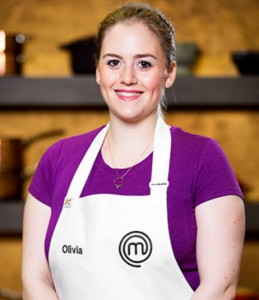 This is Olivia. She’s been in the comp all along. Yes, really.

And here’s another red shirt getting camera time – it’s Nathaniel with a twist on shepherd’s pie.
Nidhi’s curry is looking good but she’s not watching her carrot and milk in the saucepan. Who’d have thought a camera shot lingering on boiling milk creeping up to the top of a pot could have us on tenterhooks?
Damn it – it’s burnt but she hopes just putting everything in a clean pan will do the trick.
MPW has a little bonding with Nidhi as he tastes her onion mixture: “Your use of spice is genius.”
Cecilia is happy with her mega stuffed parsnip but it’s screaming bottom three. And then she pipes “for Nathan” in tomato sauce on the plate.
Plating up time and there are a few cases of undercooked lamb.

Time to judge
Just spotted a brunette pony tail girl up the back (not Greek Zoe) who I’ve never seen before. The red shirts just keep coming.
Nidhi is first. You know MPW is serious because he takes his glasses off to speak to her: “I wish you had a restaurant where I live. I’d be there every week.” Matt loves the carrot pud: “It’s better than anything I’ve ever had in India.” Nidhi, I really hope you have a market stall/food truck/takeaway shop lined up here in Adelaide so I can judge for myself.
Con tries to keep a stiff upper lip as he serves up his raw lamb rack. Apart from that, it’s all too sweet. Poor Con.
Newly discovered Olivia serves up a “forest floor”. Everyone loves the quinoa crackers and the dish in general. “Never change your style,” says MPW.
Mimi’s dish looks fine but nothing spesh; Harry (tall blond who “harvests his own seafood”) dishes up a take on pot au feu (French beef stew) but George says the flavours aren’t right; Anasatasia – who? – has undercooked her lamb; Brett (who?) gets in trouble for serving carrot granita with roast meat.

Such an honor to be cooking for Marco Pierre White….. Now PUSH PUSH PUSH!!! #MasterChefAU pic.twitter.com/VnE7S6lYF4

Nathaniel knows his shepherds pie sucks as it’s not finished and the judges agree.
Intense Matt serves up a platter full of koftas, flatbread and various side dishes. He’s done a lot of work. Gaz says he’s nailed it.That’s two hits in a row – go Matt!
Charlie’s plating looks gorgeous but will his soz get the nod? “It doesn’t do it for me,” says MPW, saying his sauce is too robust. Charlie is crushed.
Here comes Cecilia’s weirdo parsnip but no doubt her son is stoked to have his name on TV again. “It certainly doesn’t look very appetising,” says Gaz. The judges speak very kindly to her about missing her kids and George tells her to put her “head down and bum up”.
Greek Zoe serves up her Middle Eastern spiced dish and George goes for seconds on the lamb – her dish is his pick of the day. She’s nailed the smokey flavour. Marco agrees.

So, who’s sitting pretty for the immunity challenge and who’s in trouble?
Top: Nidhi, Zoe, Olivia. Bit sad Matt isn’t up there as they seemed to adore his dish.
Bottom: Con, Cecilia, Nathaniel. No surprises.
MPW gives them a pep talk about pushing on.

Tomorrow night: It’s the keeping up with Marco challenge. Hopefully this will suit Cecilia better than following a written recipe as she’s mentioned that is more challenging for her, and I’d like to see what she can do dessert wise when she’s given time.