Nothing explains the nervousness felt in the moments right before taking off the lid on a mystery box! #MasterChefAU pic.twitter.com/0Dkg6wXy0m

To quote Brad Pitt: What’s in the box?

Matt Preston is back in purple but it’s more of a strong lavender shade tonight, with an Impressionist-style white, purple and green cravat. The contestants have 60 minutes to produce a dish and – here’s a twist – the winner gets a shortcut straight to the immunity pin challenge. And they are told not to waste too many mystery box ingredients. Anyone who’s watched the show before knows they’ve previously cooked with kitchen scraps, so the savvy ones should stockpile some ingredients for the next round. Here’s what’s in the box: 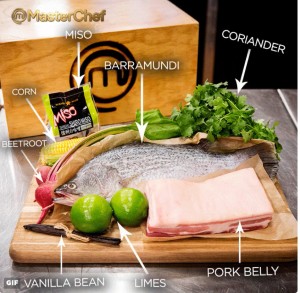 I expect we’ll see a lot of fish or pork dishes with Asian flavours, as everyone always goes straight for the protein. I hope someone does a lime dessert – Charlie? Karmen?
Will Anastasia get airtime tonight? We haven’t seen her for a while. Who else? Elena? Cecilia? Electrician Trent?
We get a talking head from Brett about his barra bromance, so it will be great or dreadful. Intense Matt is getting airtime about hispork belly so perhaps there’s yet another victory in store for him – go Intense Matt!
Nose Ring Chloe is getting the ditherer edit usually reserved for Theresa but decides to go with a smoked nougat.
Oh, here’s SWishy Pony Tail Zoe – we haven’t seen her for a while. She’s doing sponge with smoked vanilla ice cream. Smoking is hot, hot, hot this season. Anastasia gets to speak – the editors are giving some of the usual suspects a rest. She’s doing pork belly.
Wow – and Trent can talk! He’s never been tasted – but he’s never had any shockers. He’s making miso pork and corn dumplings with miso caramel sauce. Matt Preston is pushing him to make a broth so there’s no repeat of the dry ravioli-style dishes they’ve been seeing.
Brett is getting the flashback about his pilot background and his food dream of running a gastro pub in Victoria with his daughters. So he’ll get tasted.
The edit is focusing a lot on Intense Matt’s pork belly and whether it will be tender or not. I predict a triumph. Anastasia is getting the same edit (again pronouncing it missoo) but I reckon her pork won’t cook.
Trent is having dumpling dramas – they don’t look right so he rolls more dough. Zoe is staring at her cake as it’s not cooked in the centre. It’s a small cake but why didn’t she do a second one that was just muffin sized? They always need a back-up plan. George tastes her smoked ice cream and loves it, so even if her cake flops she’ll get tasted – as has happened before.

Time to taste five dishes
Pilot Brett is up first with his crispy barra with corn two ways and pickled beetroot: Matt says it’s classic, delicious and well rounded.
Anastasia’s vanilla sticky pork with beetroot: “This is a cracking dish,” says George, but it needs salt. Matt says it needed more time in the pressure cooker to be perfect. Gaz likes her.
Trent gets his first tasting for his pork and corn dumplings with a miso and caramel broth: Gaz loves the presentation. Matt says the balance of flavours is great. They all love it.
Zoe’s sponge with miso glaze and smoked vanilla ice cream: “That is one of the best ice creams I’ve tasted in this competition,” says George. But her cake sucks. Matt says she should have just served the ice cream with the miso caramel sauce. 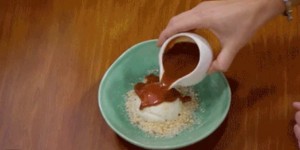 Chloe’s smoked lime and vanilla nougat with lime crumb and beetroot caramel: Ooh – she gets the Matt tap of the spoon. And then from George. And then even Gaz comes to the party. They think all the elements are in balance. “I do want to lick the bowl,” says Gaz. And, yes, Chloe has won. She’s been a bit up and down this season but has done quite well when put in a pressure situation.

Invention test
There’s no pantry and no herb garden but they do get the usual staples. They’re cooking with whatever’s left in that mystery box, including their scraps – and they get extra credit for using scraps creatively.
Elena gets a talking head – she and Harry both have some barra left. Given most people would have cooked with either pork or barra in the first round, they still have opctions.
Heather is doing barra mornay with coriander root and corn cob-infused bechamel.
Mimi us making coriander ice cream with lime syrup cake – quick, get some smoke in there, Mimi, or you won’t have a chance.
Pilot Brett is doing a pork sanger with flatbread and miso mayo.
Intense Matt is making san choy bau with barra wrapped in beetroot leaves.
Karmen is doing a savoury dish for once and it sounds interesting: barra with pickled beetroot “scales” and a burnt miso sauce. If only we knew what she’d cooked in the first round – presumably a lime dessert.
Charlie is making miso ice cream but it may not set.
Brett is making a miso mayo to go with his sanger but he is running out of ingredients (presumably egg) and stuffs it up. It’s because you didn’t drizzle in your oil, Brett!
Oh – here’s Theresa. She’s doing vanilla miso ice cream with a corn custard. The judges are a little worried she’s doing two soft-textured. Gaz as much as tells her to make pastry.
Charlie’s miso ice cream is too runny so out come the trusty red silicon moulds.
Matt is making floss and crispy skin with his barra for crunchy textures. No sign of many of the contestants featured in the first round, so they’re out of the running.
Elise is making a parfait and a soil – haven’t had one of those for a while. What’s the difference between a soil and a crumb?
Heather is trying to make a rough puff to go with her mornay and Matt pops over to give her instructions on using the smoking gun. Smoking guns are the new sous vide – expect to see a lot of them on MKR next year.
Mimi’s dome-shaped lime syrup cakes look delish, but Elise is having cake trouble – she’s doing one of those siphon microwave cakes in a paper coffee cup but her siphon isn’t charging. George and Gaz tell her it’s because her cake mixture is way too thick. Uh oh.
Intense Matt says his dish is “a texture bomb” and it does look inviting. Karmen’s fish with beetroot scales also looks fabulous. 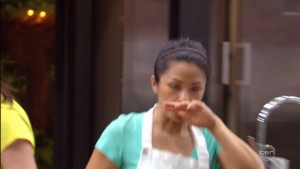 Time to taste
Will we see what people like Miles and Elena have made? 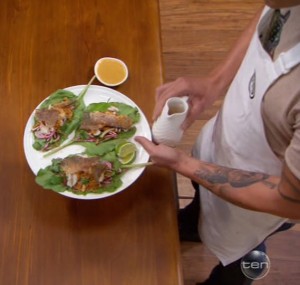 The judges love the look of it. “You have no idea of the pleasure of this dish … I’m just thrilled that you’re putting up beautiful food,” says Gaz. “That is making the hair on the back of my head stand up.” So Gaz is Team Intense Matt, too. They even liked that he did two sauces. 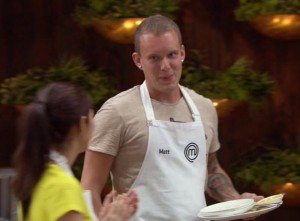 Charlie’s miso ice cream with corn crumb (but his caramel has seized): George tries to smash the caramel with his spoon just to rub in to poor Charlie how much he’s ballsed it up. The ice cream is a bit funky – and not in a good way. He’s usually perfect hair is all floppy. So he’s bottom three.
Heather’s barra mornay: Matt likes the idea of the dish. And he loves the flavour and textures.
Brett’s roasted pork in coriander flatbread: Matt loves the pork. “Is it a disaster dish? No.” George says the bread is undercooked and “blanket-like”. Ouch. As Brett already knew, it needed soz.
Elise’s vanilla parfait with lime curd and coriander sponge: Ok, but it could be better. 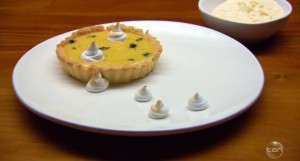 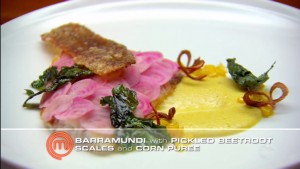 You can see her dessert plating come into play here.

Karmen’s barra: “It just utterly makes sense,” says Gaz – his cranky pants must be in the wash. George says it’s incredible and she can win the comp.
Theresa’s sweet corn milk tart and miso ice cream (she whispers “sorry” as the judges taste): Matt says it tastes like tuna mornay: “I really don’t like it.” She’s bottom three.
Mimi’s coriander ice cream with lime syrup cake: Gaz thinks it’s clever and moreish. “It’s as if the coriander says ‘I need to be in ice cream always’,” says Matt.
That’s it – no Anastasia, no Nicolette, no Miles and no Harry all episode.

Top three
Going through to the invention test and a chance to fight for immunity with Chloe are easy picks: Intense Matt, Karmen and Mimi.
Bottom three are also obvious: Charlie, Theresa and Brett

Tomorrow: Chef Jason Atherton sets the pressure test and it’s a quail afternoon tea. What? Google says he received a Michelin star and previously worked for Gordon Ramsey. And he hosted the UK’s version of MKR, but doubt that will get a mention. I don’t know how Brett will go in this as it looks quite fiddly and he’s more about bold flavours, not flashy techniques.