Blurb says: With immunity up for grabs, contestants will work in pairs to create a savoury and sweet jaffle in 45 minutes. The winning pair will then need to out cook professional chefs to secure an immunity pin.
They did a jaffle challenge last year and it was won by Ashleigh – remember the shy nanny who liked to make desserts? She did a jaffa jaffle
recipe here.

I think someone must have given the four-year-old a can of Red Bull today when I wasn’t watching because he ain’t sleeping. So while there may be a recap tonight, it will be late and probably in dot point form.

Intense Matt (IM), Karmen, Mimi and Chloe are in the mix for immunity and tonight there are two pins up for grabs, as they’re working in pairs. So, there have now been more immunity pins offered on the show than there have been panna cottas served.
Because Chloe won the mystery box test earlier in the week (smoked nougat with beetroot caramel) she gets to choose her partner and, of course, she picks IM. He’s good at dessert but great at savoury, and Chloe will no doubt do sweet.

Soooo, TenPlay is giving me the runaround so I’m giving up to watch Game of Thrones! Jaffle pix below and, for those of you who didn’t watch the ep, Chloe and Matt won the jaffle round AND got immunity. 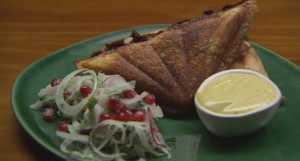