It’s Sweet Week so Michelle had better get out her red dome moulds and lustre dust. Bryan is going to go nuts.
How many episodes until we get the liquid nitrogen for ice cream making?
It does look like they do some pretty cool stuff.

Tonight’s mystery box challenge is set by chocolatier and pastrychef from the Savour School, so expect loads of chocolate. Kirsten Tibballs has been on MasterChef three times before.
She was responsible for this pressure test cake in 2013 (yes, the infamous Emma Dean season):

Looks tame compared to some of the more recent challenges.

This is the cake that sent spice queen Neha home but it’s ok; she now has her own ice cream company. I am going to have to check out the orange chilli choc one.
And so it begins …
Well, that’s a good way to keep energy levels up during a challenge. While Georgie chugs Swisse vitamins the contestants can nibble on the mystery boxes – they’d just better keep them away from Presto and Gary. They get to smash them with a mallet – the boxes, that is, not the judges.

To kick off Sweet Week, it’s a mystery box made entirely of CHOCOLATE! #MasterChefAU pic.twitter.com/9Qf32Ab5Lr

What a decadent surprise – you can snack on today's Mystery Box! 🍫 #MasterChefAU pic.twitter.com/IyXe2RrJWu

They get mint, instant coffee, coffee beans, green tea, nectarines, coconut – desiccated and whole, raspberries, rum. Oh, and the chocolate box. They get the staples and a few baking-type ingredients are added, like gelatine and icing sugar.

Whiskey Eloise is making a trifle with marshmallow in it instead of cream.
Arum wants to use the matcha tea – shades of MKR here.
One blonde pony tail is doing a take on an Iced Vovo. Thank god they have names on their aprons – it’s Eliza. The judges will like the concept.
Ooh, Invisible Trent made the edit for a sec. Hi, Trent!
Pete the crane driver gets a lot of air time. So he’s either going to bomb again or do spectacularly. He’s making a toasted coconut ice cream and – yes – he’s got the red silicone mould out! Bingo!
Bryan is in his happy place. He’s doing a “fallen” ice cream in a rum and coffee. Sounds similar to something Theresa (one of the siblings) made last year, but I imagine Bryan’s will have more elements. 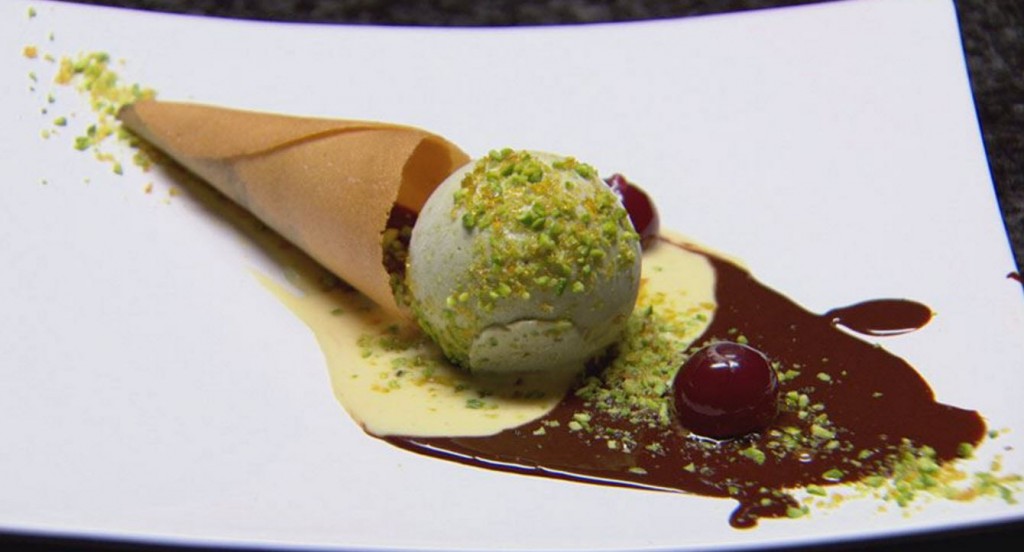 It’s back to Arum – guess we don’t need to know what all the other people are cooking – and he’s doing a matcha cremeaux that looks like the contents of a baby’s nappy. Instead he will make a raspberry sorbet.
There’s a lot of footage of people trying to open coconuts, Bushranger Ben seems to be making a jelly (don’t mention the jelly to Ray) and the smoking guns are out in force.
No idea yet what dessert girl Michelle is making, so it must be average.
Uh oh – Aaron is still using his green poo slick on the plate. It had better taste good.
Pete is getting his domes out but he hasn’t made any spares – aargh!!!! How many times do we hear this!? He’s obviously watched past seasons, though, because he knows to melt the edge of his half sphere on his hot baking tray so the two halves will stick.

The judges taste
Bryan’s fallen ice cream: It’s pretty and they love it.

It's the return of the fallen ice cream and we are more than grateful to @BryanZhu_AU for bringing it back! Delicious 👌 #MasterChefAU pic.twitter.com/NWi0bc3C8C

Eloise’s trifle with coffee jelly: She gets a Gary eye roll of delight.

Arum’s raspberry sorbet with matcha and choc: The matcha cremeaux he was so worried about is praised by Kirsten. It’s a thoughtful dessert, says Presto.

Pete’s coconut: It looks pretty spiffy. I’d say Pete’s got this but they also want him to have an underdog win. Presto calls the ice cream “heavenly” and it’s a playful dish. (And, surely bonus points for using the red silicone moulds?)

And the advantage (aka kiss of death) winner is: Pete for his coconut.

INVENTION TEST
There’s a new chef to set the Invention Test and it’s Janice Wong, who’s also been on the show before.
In 2015 she set the Cassis Plum dessert challenge for an elimination test:

Rose went home off the back of this; she was up against dentist Matt and Reynold.

All the contestants are led into the pantry to view Janice’s glow-in-the-dark edible art installation, made of 7000 flowers. But they don’t let the contestants eat them.

They have 90 minutes to make a dessert using flowers as inspiration. Pete gets another 30 minutes – that’s huge! He also gets Janice as a mentor for the 30 minutes.

I thought the 30 minutes would be at the end because, in effect, the other contestants get 30 minutes to stand there and think about what they’ll do. Pete’s struggling a bit but, thanks to Janice, comes up with a garbled story about bees and honey for his inspiration.

Composed Diana is inspired by roses, using strawberries and cream with a rosewater ice cream and a pine sable (aka bickie).
Whiz kid Callan is is using a childhood memory of grandma’s house, involving apple pie and roses.
Ooh – Headband Samuel is making the edit! But it’s because he’s spent 20 minutes wondering what to do. Come on, South Straya! Luckily he spots a borage flower in the garden and I learn something here: Samuel says it taste likes cucumber. Thanks, HS!
Young Sam is making beetroot choc with a basil granita. He seems to have a lot of flavours going on.
Bryan is cooking a ginger and yuza pannacotta with elderflower.
Still not airtime for Little Mich.
Callan is creating a “baking scent” to evoke grandma’s house. I don’t think we’ve seen anyone do this before, although Heston has used it in at least one dish he’s set as a challenge.

Invisible Trent is getting a talking head, but it’s because his sorbet isn’t setting. He’d planned to plate it with an edible wreath around it. So, that’s at least one for the bottom three and I’m worried Bryan could be, too, because in his excitement to meet Janice he’s making 1000 elements.
They’re implying Headband Samuel is in trouble but I think he’ll pull through, but Young Sam is having beetroot woes.
Uh oh – HS’s jelly is not set. Is jelly the “it” element this season? Parfaits are so 2015 and last year was the year of the chocolate dome. And Invisible Trent’s sorbet is stuffed.
Callan’s “apple pie” is one of those modern “forest floor strewn with debris” type desserts. He should go well.

The judges taste
Callan’s apple pie with rosewater granita: The judges love the idea of his baking scent. He gets the spoon drum on the table. Janice says it’s “naturally beautiful” and “the essence of cooking”.

Pete’s Beehive in the Garden: They like the honey ice cream but are not overwhelming in their praise. But he has escaped the advantage winner curse and won’t be bottom three.

.@PeteMorganAU ought to bee happy with himself – he has created a stunning dish! 🐝 #MasterChefAU pic.twitter.com/en0vk7a4mO

Eloise’s watermelon rose: For once Eloise doesn’t get gushed over. It’s good but needed a crumble.

Michelle’s “fallen flower” with brownie cubes: She has made a half chocolate dome (hmm, kinda similar to her audition dish. We know she’s not great with savoury – maybe her dessert repertoire is not great?). They like it.

Sarah’s By the Bay: It’s tahini ice cream, hazelnut mousse and orange blossom jelly: It looks fancy and cheffy. George says he is salivating for more.
Headband Samuel’s Strawberry Sorbet with cucumber: “I don’t get it,” says George. Gaz likes the individual elements but they aren’t flamboyant enough. So one of my predicted final three will be in the bottom three.
Young Sam’s ganache with basil granita: Janice says it looks beautiful. They draw it out with an ad break, which means they will love it. “For a minute the world just sort of stopped and I was in the bowl,” George says. Janice says its beautiful and original. Well done, Young Sam.

Bryan’s Flower Garden: There is a lot of very bright bitsy stuff on the plate. “Just do three things, mate; not 700,” cautions Presto. Janice liked his panna cotta but the flavours don’t balance. He’s devo.
That’s it – we don’t get to see what the others made.
So I guess bottom three will be Invisible Trent, Bryan and Headband Samuel.
Top three: Callan, Young Sam and Diana.
And, yes, bottom three is as expected. Do they get the floating ice cream pressure test? Please let HS be safe!

Tomorrow night
Yes, it’s Christy Tania’s floating ice cream. I think Bryan may crack under the pressure because he knows desserts are considered “his thing”.