It’s the turn of step besties – stesties? – Hazel and Lisa tonight and we don’t know much about them other than they like twinning their outfits. Oh, and they do a good Kath & Kim impersonation and have been fair and non-catty in their commentaries. Which makes them likeable, but can they cook? Given the performances in this round so far, a half-arsed job will see them safe anyway.

It’s kind of nice to see a stepmum and stepdaughter who get on so well. Hazel is a fitness instructor, of the annoyingly upbeat variety, and even though I rewound it twice, I could not catch Lisa’s profession – is flooring finance a thing? Or did she say boring finance.

The croquettes sound simple but so much could go wrong with the Wellington, from the pastry to the doneness of the meat – made all the more difficult by the number of people they have to cook for.

As she peruses the menu The Khoo is looking as divine as always – if her cooking empire crumbles she could definitely start a makeup and fashion house. 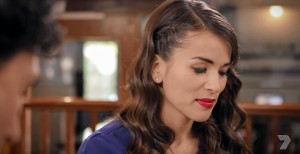 The Khoo in all her glory.

Shopping goes smoothly and it’s home to decorate their restaurant, the aptly named Zesty. There have been a few celebratory hip bumps so far by “Daughtie” and “Steppie” – will these lessen as the night goes on?

With the clock at 2:40 they head to the kitchen, so 20 minutes late already. Wisely they start with the icecream but I don’t know why Lisa is starting with mayo when someone needs to make pastry. It’s not that hard to make mayo once you’ve done it a few times – just add some hot water to it, Lisa! But, no, she’s trying again and it’s flopped again. Did she forget the salt? are the eggs not room temp?

Meanwhile, Hazel starts on the puff and puts it away for the first rest, before moving on to the entree. Earlier, The Fass and The Khoo had said they wanted bechamel or mash holding their croquettes together but Lisa – or is it Hazel? – sees these flavoursome binders as “unwanted carbs” (thinking of you, Jessica!). Uh oh. Hazel is boning the salmon, so Lisa is definitely the sous chef in this kitchen. 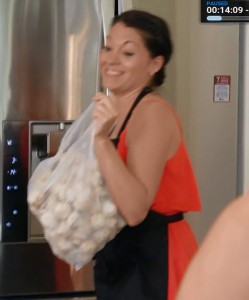 I hope everyone likes mushrooms.

Here come the guests and the girls look lovely in their frocks – not a white knee sock in sight – but poor Tarq’s Dad has been lumbered with a navy double-breasted jacket.

Off to a wedding?

The other guests ooh and aah over the decor but Lauren is ready for a war and can’t even muster up the manners to say something nice in her confessional. 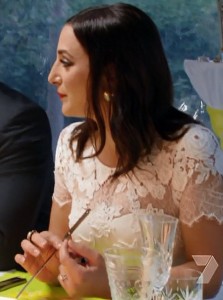 Ready to stab someone if they dare insult her inedible food.

Here come the judges and, sadly, The Khoo is not wearing one of her signature vibrant prints. 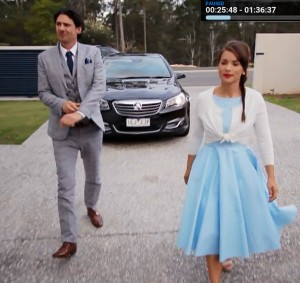 The Khoo looking rather Sandra Dee.

Unfortunately the Steppies can’t open the door as Lisa left the tap open on the fryer while she filled it up, and the Exxon Valdez is happening in their kitchen. Just what they need. Eventually it all gets sopped up with reams of paper towel and the croquettes look golden and crunchy, but they are serving them with a fennel and strawberry salad … Colin is going to go off his nut!

But before the judges can taste, this happens: 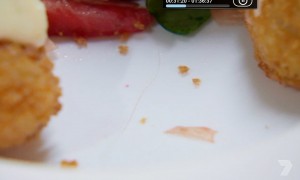 Now Lauren has something to justify the low score she already planned to give them. Hair in food doesn’t bother me much and it was bound to happen on a show where the contestants can’t wear hair nets or chef’s hats.
Cue the chew … The Fass finds, as foreshadowed, the croquettes are too dry due to lack of moisture and there was not enough aioli to compensate (insert your own memory here of Manu asking: Where’s the soz?). The Khoo tries to soften the blow by saying the aoili was zesty and the croquettes had crunch. But basically the filling and the salad sucked.
And what do the guests think of the strawberries in the salad? 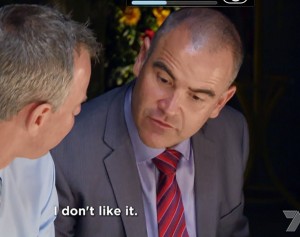 Mate/Dad No. 2 speaks for everyone.

Back in the kitchen Hazel and Lisa think Lauren was just being her snooty self by not eating her entree. Again, Hazel shows she is the cook of the pair by doing all the work for the Wellington, but they are not wrapping everything in a crepe, as is traditional, which means the moisture from the mushroom duxelle could make the pastry soggy. They are in trouble with timing, as those are huge pieces of meat that will take over an hour to cook, and Stepmum already spent time searing the meat and assembling the layers. And then they need to rest it at the end.
Wellington in the oven, Hazel gets to stirring her thimbleful of sauce on the stove. Lisa has to convince her they need more than spot on each plate. How can you be a contestant on MKR and not know the first rule of MKR is: More soz.
So, they add cream to what looked like a jus. And then red wine. Bleaurgh. 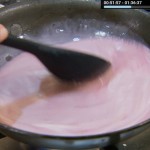 Hazel:It’s actually a nice colour; it’s really interesting.” Interesting – it’s what you say when you aren’t convinced but don’t want to see rude. 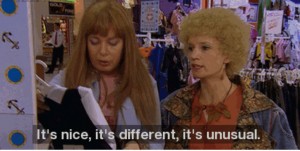 In the dining room the guests are so delirious with hunger they’ve started singing The Lion Sleeps Tonight.
Remember these guys from 2012 MKR? It was three hours between their entree and main, and they served dessert after 1am.

The Steppies use the time spent waiting for the Welly to prep their dessert. Finally the Wellies are out but OMG they have not cooked the galletes. Why didn’t they shove them in at the same time? And after all that some of the pastry is cracked, the bottoms are soggy (that’s why you use the crepe, girls) and one of the fillets looks to be overcooked. They could break the record here for longest MKR wait between meals. Colin is going to tear them a new one.
They rightly decide Lauren will get one of the dodgy pieces.

It’s chew time … and the first thing The Fass does is notice the soggy bottom, so he gives them a lesson in where they went wrong. The potatoes and green beans are a bit undercooked and they did not cook out the wine in the sauce. The Khoo struggles to provide constructive criticism.
It’s a fail and it will be interesting to see if the guests score it higher than it deserves because they want to keep Lauren and Carmine out.
Back in the kitchen the Steppies are getting dessert out quickly, but have they allowed enough time for the syrup to sink in to the cake? Nothing worse than stodgy, dry polenta cake. Why didn’t they also serve some syrup on the side?
Lisa seems unaware of how much trouble they are in. “We’ve had an okay entree, a good main; we really need a great dessert.” No, you need a time machine, Lisa.

Time for the judges to chew … The Khoo is happy with the cake (the syrup must have sat for a lot longer than the editing indicated), but not the ice cream, as it’s more vanilla than pistachio. The Fass must really like them as he’s been a lot more brutal in the past. He’s glad they had a comeback with the cake. “That was your dish of the night.”
The camera cuts from a glowering Lauren (gotta keep the villain edit going) to a stoked Lisa. 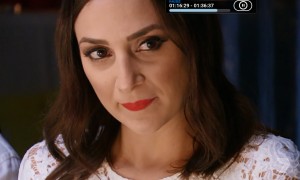 Mr and Mrs Chops enjoy the cake. They are too normal and pleasant to make the edit much, so here’s a reminder of what his hair looks like: 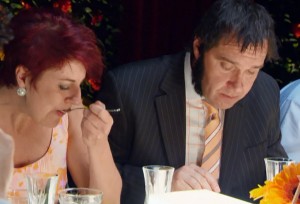 Being likeable goes a long way with the scoring – take note, Lauren.
Tonight we’re off to Newcastle to see if the childhood mates can cook. There hasn’t been much promo for them, so perhaps they can.