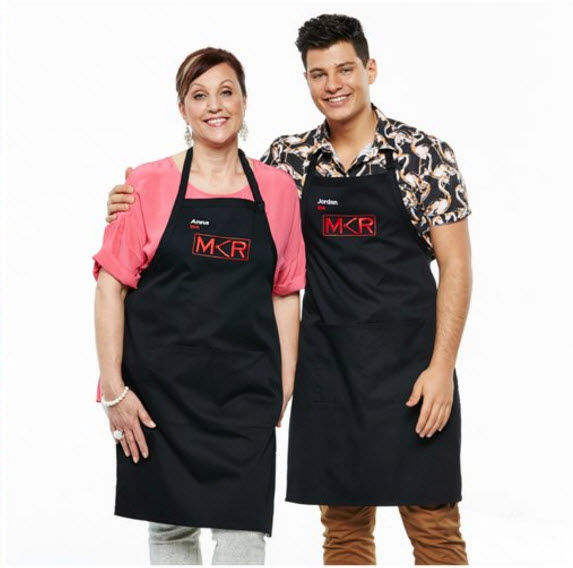 Tonight it’s WA’s turn, and I’m looking forward to see what Jordan is wering, but whatever happens tonight is just an amuse-bouche for Zana and Plus One’s effort tomorrow night.
We officially meet Mama Anna has been married for 33 years and has four sons, whom she loves equally. Jordan: “I’m top two, though.”
Anna is Maltese she gets her thrills feeding other people. She and Jordan plan that their instant restaurant will leave everyone with a food baby as a parting gift. I don’t think this is such a good thing.
They hit the butcher first for their pork belly for the snags and rabbit for the braise, because the only bunnies at Coles are the choccy ones in the premature Easter section.

It all sounds divine. What the heck is imqaret? Pete, Manu, please explain? Actually, it’s Jordan who explains it’s a Maletese date biscuit, and Mama Anna hopes it all comes off because they are her Dad’s fave dishes.
Mama: “You’re always so positive.” Jordan:”I’m a proton.”
Their restaurant is European themed “Mama knows best” so there are olives everywere, wine barrels and -I swear this is what Jordan said, channeling Manu – “little momentums from their past”.
They are on track and ready in the kitchen when the clock ticks to 3:00, so they’re already an hour ahead of the SA Besties.
Mama is cooking octopus and admits it can be tricky but “don’t worry, I’ve cooked it tonnes of times – it’ll be fine”. Uh Oh – is that the MKR kiss of death?
Jordan is making gelato from 18 egg yolks. Mama wishes he would measure for a change. He is putting a lot of orange blossom water in and they love it, but it may be confronting for a newbie palate.
Mama is ensuring the rabbits are fur free, so Zana doesn’t hyperventilate.
Jordan shows he’s handled a few sausages in his time (sorry, couldn’t resist), but his filling technique is impressive. It looks good.
Poor boy then has to peel and chop 30 onions. The rabbit goes in the oven and they appear to be on track.
Here come the guests and I like the way Cougar has been styled for once. Cop No. 1’s mum is Maltese and she says they’ve done a good job with the decos, but she still doesn’t know where Malta is. 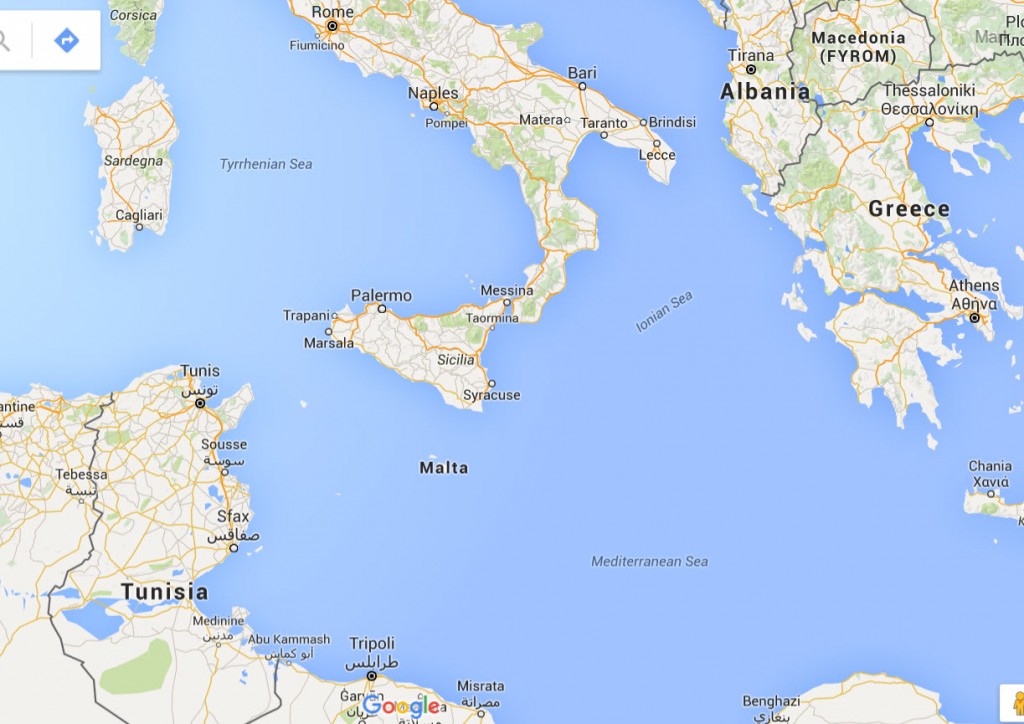 Thank goodness for Google Maps; it’s that island in the middle.

Back in the kitchen and Anna has a bag of Coles brand flour on the bench right next to a name brand flour. Then she pulls out another band, presumably 00 flour, for the pasta.
Jordan tips duck fat all over the prepped chips – yummo! And tonight for the first time we have twice-cooked sausages: in the oven and then the chargrill. They disagree over the manner of sausage slicing and Mama wins.
Everyone else is dressed for Perth weather but the poor judges have to sweat it out in suits. Mama needs to skol her glass of red before she can answer the door.
Jordan tells the guests they are going for a family vibe with that feeling of being full and in the belly and “getting the meat sweats”. Is that what we really want to hear.
Zana gives the menu grudging respect and says she’s glad they have competition-worthy dishes on there, but of course she is going to smash it even harder.
Jordan is having trouble with his salsa verde – too much acid. But they tweak it and feel they’ve rectified the tartness.
The occies are whacked on the chargrill for caramelisation and it’s time to plate. Salad leaves (yes – they looked dressed for a change) but then they put hot chips on top and wilt it. It’s not the prettiest looking dish but has interesting flavours.

And the judges go in for the chew …”Did you meck your own zossage?” Oui. Good, but they needed more salsa verde and cutting the zossage meant the fat leaked out, leaving them dry. Pete liked the flavour of the zossage but agrees with Manu. The judges tell them to stick to traditional ways of serving food.
The cops are happy with the occy; Cub actually gets to speak by himyself and Cougar is hoping for a main course disaster to save them. Zana says the flavours are familiar to those of her own cultural background but they stuffed up the snag, and she makes it way better. Where’s the soz? she bemoans of the occy.
Cop 1, Zana’s arch nemesis, isn’t happy: “To be honest I was zoing out.”
Back in the kitchen and the sauce isn’t reducing as much as they’d wish, but there’s another disaster looming. Jordan didn’t put the lid properly on the ice cream churner and half the mixture has ice crystals in it.
Jordan works to salvage it while Mama makes pappardelle ribbons using the pastry cutter handed down from her mum. They quibble over how much pasta to allow for each person. The soz is too watery, so they tip it off to reduce it.
Cop No. 2 must be worried she’s going to be eating Thumper: ” This may sound silly, but do they already come de-furred?”
Luckily Zana is a rabbit pappardelle expert and tells everyone what to expect.
Mama and Son plate up and, damn, it looks good. This photo doesn’t do it justice.

It’s chew time … Pete tries to scare them by asking if they’d tasted it: “Mama, you knocked me off my chair. That sauce was just profound.” The only tiny negative for him was the meat was a bit dry. “I’m loving eet. I’ll come buck tomorrow. The pasta are great. The rabbit is nice and jew-say.” So, 10 from Manu and 9 from Pete?
More importantly, what does Zana think? “It’s good. This is definitely the dish that has impressed me the most throughout this whole competition.” Plus One wants to have a Pasta Off, so you know he’s going down hard.
In the kitchen it’s dessert time and Jordan is not 100 per cent happy with his ice cream’s texture,but he is still going to serve it because he wants everyone to have a big scoop. Noooooo, Jordan – this is when you buy some cream or mascarpone at Coles as a back-up option.
Back in the dining room, poor Cougar is “not a big fan of ice cream”. Is that because she thinks it should be made with condensed milk?
Curly is afraid it will taste like soap due to the orange blossom and it’s a fair call, given we see Mama sloshing it into the bickie filling as well.
The pastry looks lovely and thin and we see the bickies are made by frying them. Ice cream flaws aside, they are the only team to serve proper ice cream that hasn’t melted by the time it hits the table.
Curlies can’t wait to dig in and are thinking Mama and Jordan could knock them off the top of the leaderboard.

Cue the chew … Manu: “I’m very satisfied one more time.” He likes the contrast of the warm biscuits and cold ice cream, but … Jordan knows the ice cream is to blame. Pete is happy, too. If they’d got the ice cream right it would be the best dessert in MKR history (Nic and Rocco, eat your heart out).
Curly finds the ice cream soapy on its own, but when combined with the bickie it’s yum. Even Zana likes it, so it must be delicious. Plus One has been watching too much How I Met Your Mother: “Challenge accepted.”

The scores: Cougar Town 9; Cops 9; Besties 8; Zana and that random guy 9; Curlies 8. Thumbs up to everyone for fair scoring, especially Cougar Town, who have a lot to lose. Total: 43/50
Judges: Entree Pete 7, Manu 7; Main Pete 9, Manu 10; Dessert Pete 9, Manu 9.
Total score: 94
Anna tears up at the thought her dear departed Dad’s recipes have been so well received.They now top the leaderboard by five points.
Tomorrow night it’s off to Victoria to see if Zana can cook. The promo shows them heading off to the shops in some sporty car and getting pulled over. Sucked in.