Hooray – Survivor is back! Thirty-two seasons in and it’s still my all-time fave reality show (although GBBO comes close).

Do not read ahead if you have not see the episode! You have been warned.

We’ve got Brains, Brawn & Beauty back again! What do u think of Kaoh Rong tribes? https://t.co/gn2aJJIzKp #Survivor pic.twitter.com/oDwHQuGqsQ

As per usual of late we start with the cast arriving on boats. Survivor has gone yet again with the BBB theme – Beauty, Brawn, Brains – and the cast have a lot to live up to after the joy that was Cagayan. The official name is Kaoh Rong, but let’s just go with BBB.
As the boats arrive we meet a few of the cast via confessionals. One of the Beauties (and honestly, he ain’t that pretty) is Nick, whom I know to be a former blogger for Rob Cesternino’s Survivor website – doubt he’ll reveal that to his tribemates.
It’s the usual free-for-all grabbing supplies off the big boat to pile on a raft.

Some contestants have interesting professions: there’s a bounty hunter, a former FBI agent, quantitative strategist (say what?)  and ice cream entrepreneur (remember Eric, the hapless ice cream scooper?). And the standard Survivor professions: bartender, former professional basketballer, pro poker player, blah blah.
Caleb the “Cowboy” was apparently on US Big Brother, so let’s see if anyone recognises him. In San Juan del Sur one of the former Amazing Race contestants was targeted early, but her sister Natalie went on to win (granted, it was a terribly weak season).
On the Brains breach Debbie of the many jobs and constant yapping is already coming across as someone who will be annoying to live with – she knows everything, including how to start fire, and yet can’t start a fire. 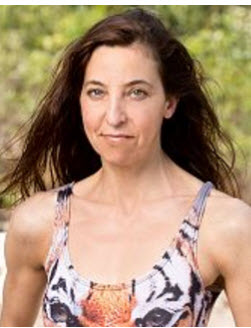 Debbie likes to talk. A lot. Very fast. This is not a good thing on Survivor.

Surely at least one Brain would be wearing glasses they could use to get a flame?
Over at Beauty, Tai the gardener is the token kooky Asian guy with bush skills and is so cute. After being on a refugee boat from Vietnam, Survivor should be a cinch for him. True to form the beauty girls are sitting on the beach weaving palm fronds. Let’s hope one of them steps up and proves to have more strategic skills than the boring Cagayan beauties of Alexis, Jefra and Morgan.
At Brawn, the bounty hunter ex-military tattoo dude, Jason, is lifting heavy objects in the hot sun … just because. He’s already targeting the blonde real estate agent before they’ve even done a challenge, because she seems week. Postal worker Darnell gets the dubious credit of first sea poo of the season and drops trou very close to the beach. Still, his tribe doesn’t seem to mind.
Back at Beauty it’s a chicken run, and the girls decide to team up with Tai. One of the girls picks that Caleb was on Big Brother, but he actually comes clean to them before they have a chance to ask. Turns out he was in the military and is a former prison guard. He is an outdoorsman and proves it by starting fire. Kudos.
Over at Brains we learn elder statesman Joe, 72, was not just an FBI agent; he was a hostage negotiator. He gets a kick out of watching Debbie try to do things her way but knows to keep his mouth shut. 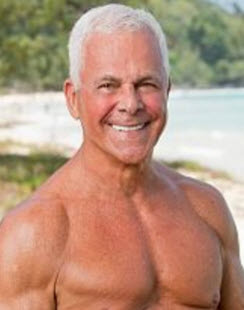 In the water some of the younger contestants, spearheaded by ice cream man, are already planning to pick off Joe and Debbie – the usual strategy. One of the plotters is an Obama lookalike and ER doctor
At Beauty we see Tai take off to dig around for an idol (yay – someone proactive), but his tribemates twig to what’s going on and this means trouble for him. Suddenly his calming energy has become “anxious energy”.

Tai is looking for a Hidden Immunity Idol, but will his tribe catch him? #Survivor pic.twitter.com/s5R6lG61Nx

There’s already been chatter that there are a few medical emergencies this season, and in this episode we already see one of the girls, Aubrey, suffering from heat exhaustion and dehydration and having a mini anxiety attack. It’s alarming for her team as it’s only day two. So, the oldies could be safe after all.
At Brawn Jennifer the contractor is freaking out on the night vision camera because she thinks a bug has crawled into her ear and she can hear it crawling around inside. Poor thing – hope it’s not a tick.
Survivor kindly cuts to a shot of a vicious-looking beetle so we can imagine one crawling inside our brains. Her ear is bleeding and she is doubled over in pain – where is medical? 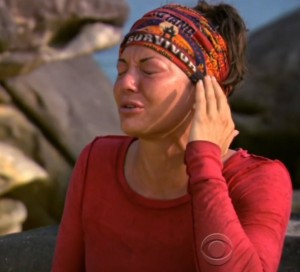 Poor Jenny is being driven mad, and it’s not by her tribemates … yet.

Jennifer is freaking out, screaming in pain and her ear is bleeding. Her tribemates are freaking at the thought of being a man down (and perhaps wondering if she’s actually nuts). Eventually we get a close up of Jenny lying in the shelter and a frigging bug crawls out her ear.

See that white wormy bug filed with ear blood crawling back into her ear canal.

After looking at it crawling around her outer ear for what seems like ages, her tribemates pick it off and squash it. Phew! Jenny’s no longer bugging out.
And now it’s time for Jeff’s famous “Come on in, guys!”. Yep, it’s challenge time. To be honest, challenges are my least favourite aspect of Survivor, especially when the groups are so large that it’s hard to keep track of everyone. They are much more fun when they get down to individual challenges. But I note Jeff is wearing an orange and white cap for this one – we’ll see if it makes a reappearance. Anyhoo, let’s see if the Brains tribe here can redeem the reputation of Brains that was so sullied by the pathetic Cagayan efforts.
Wanna know what they’re playing for? Winner gets dry wood, tarp, charcoal, lighter fluid and matches. Runner-up gets a flint.
Over at Brawn Darnell dives in and immediately loses the goggles, which will put the tribe at a disadvantage. He’s going to blacklisted for this and gets obligatory “disaster” call from Jeff.
Beauty are working well together and Brains are not a disaster. Both are back at the beach while Brawn are still diving. However, the leading teams are struggling to get their boats in the cradle and Brawns close the gap.
At the puzzle stage Brains are in the lead (Spencer Bledsoe must be wishing he had some of these guys on his season). The Brains win, thanks in part to Aubrey’s effort on the puzzle, so that’s redeemed her somewhat after her bugless freakout.
Despite having no sleep due to an insect infestation, Jenny is doing most of the puzzle for her tribe. Blonde real estate agent is watching helplessly so the team tags her out. And Beauty comes second. So, blondie is in trouble. Even though Darnell stuffed up his not being a “weak” girl should save him. apparently, he was a lifeguard growing up but is not used to ocean swimming. He rightly surmises: “When people in this game are not talking to you; they’re talking about you.”
It’s time to get tribal … Jeff is wearing one of nifty blue quicky-dry shirts. Bounty hunter Jason is not pulling any punches and immediately throws out the names of Darnell and Blondie (whose name is Alecia). 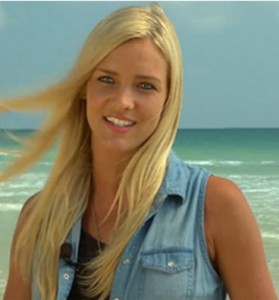 Poor Darnell knows how much he sucked and is cracking a bit under the pressure at tribal.
Alecia tries to throw Darnell under the bus with “I’m a mental giant”, but weakens her case a teeny bit by conceding she sucks at puzzles. Then she tries to write Darnell’s name down without taking the lid off the tribal texta. Oh boy.
They vote and it’s a tie, so time to revote and see who flips. And … Darnell is gone. 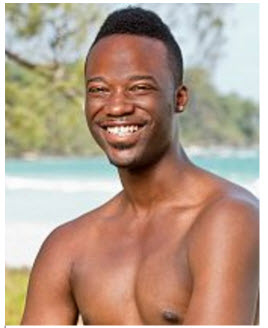 Maybe that ocean poo came back to bite him.

Who’s looking good: Jenny from Brawn, having survived the ear worm, looks strong and seems wise. She’s not as quick to fire up as the more muscle-bound members of the tribe. Scott from Brawn also seems to be able to put his emotions aside. Anna the poker player from Beauty seems a student of the game and wants to play hard.

Who’s in trouble: Tai from Beauty; Manic Debbie from Brain; Mental Giant Alecia from Brawn. Jason the Bounty Hunter from Brawn is going to start to annoy people.