It’s the first episode of Seven Year Switch, where we meet four equally attractive couples with struggling relationships. And luckily for you guys, I’ve watched it so you don’t have to.
Jackie and Tim met at the gym, where they seem to work, and a “hook-up” turned into a relationship. Jackie is upset he doesn’t like holding hands. “Take me on a date, motherf—er,” she says straight to camera with a psycho stare, not at all joking.

Meet Tim and Jackie. She wishes he was more loving.#sevenyearswitch Tues Mar 15 at 9.00pm pic.twitter.com/YchhNNSq8e

Unfortunately they also run a fitness business together so are together 24/7. He admits he slacks off work to get a rise out of her, then proceeds to tell her she’s a “bossy bitch”. You can tell if these guys didn’t have a business they’d be long broken up. Why are they on TV? Do they mistakenly think any publicity is good publicity?

Next are Brad and Tallena, who are engaged.

Meet Brad and Tallena. This is their last chance to fix their relationship before their wedding.
Tues Mar 15 at 9pm pic.twitter.com/ED8HEi3cab

They met on Tinder, they say, giggling. They were meant to get married a month ago but postponed it mainly due to financial worries. Brad doesn’t want to spend $10,000 on a wedding (seems cheap by modern standards) but is happy to buy a $3000 TV. Tallena says Brad’s priorities are 1. golf, 2. his car, 3. Squishy the bird (how hilarious) and 4. her.
The therapists meet the couple and Tallena says: “Every time we used to fight Brad used to take my ring off me.”
Urgh – let him go live the single life, Tallena and find a nice bloke who wants to be in a relationship.

The third couple, Jason and Michelle, has two kids after being together seven years.

Jason misses the happy days of having fun together. He’s dressed like a 16-year-old skater boi. Michelle is focused on being a mother and Jason works a lot at his motorbike and web design business, so they are not together much. He feels the weight of their financial struggles. “We are not a team, at all,” Michelle says.
This is sad – these are not just shallow gym junkies in a passive-aggressive relationship.
The therapists ask what Michelle does for the relationship. She says: “I just don’t really try. At the end of the day, I just want a bit of time for myself … I’ve lost every sense of who I am.”
I’m no therapist but it sounds like Michelle has some form of post-natal depression.

The final couple is Ryan and Cassie.

Meet Ryan and Cassie. Ryan wants his wife to fall in love with him again. #sevenyearswitch Tonight at 9.00pm pic.twitter.com/GpSMmM9vxA

Cassie has a child from a previous relationship and they have a baby together. She thinks Ryan needs to grow up: “It’s like I’m dealing with another child.” We learn that soon after they became engaged their first child was stillborn, which put a lot of strain on the relationship. He threw himself into work and she feels emotionally unsupported. She wants him to ditch his fledgling electrician business and get a stable job, so he can spend time with the family. “I just want my wife to fall in love with me again,” Ryan says.

And now to shuffle the deck. Each person is teamed up with someone of the opposite sex from another couple. For Michelle at least this should be the break from the kids she obviously needs. She tells Jason, if it fails and they divorce, he will see the kids on weekends. We learn man child Ryan has never spent a month apart from his nine-month-old daughter. Tallena will have a birthday while she’s away but Brad says she’s not allowed to celebrate it with her new partner, and no hugging. Only fist-bumping. So, you don’t want her, Brad, but no-one else can either? Fitness queen Jackie says Tim can’t get in a spa with his new partner.

Before they head off, they tell their families and friends what’s going on – Ryan and Cassie’s family look like they were expecting them to announce a divorce, although the cameras would be a giveaway something else was up.
At their last dinner together Jackie reiterates the “no spa” rule: “As much as you annoy the f— out of me I actually love you … Say you love me back on TV,” she says while holding a steak knife. She is lookingg – and acting – more and more like choir queen bee Anna Camp from Pitch Perfect. 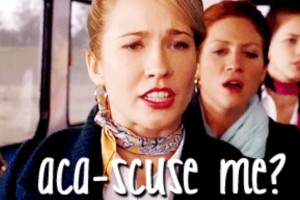 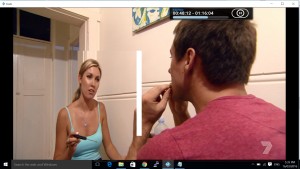 I have a knife.

When it comes time to show goodbye Brad of the $3k TV finally shows that he will actually miss Tallena and starts crying. Hope there’s a big TV where you’re going, Brad, to make you feel better.
Gym junkie and affection-phobe Tim allows Jackie to hug him goodbye “He’s only ever said I love you in a text message one in three-and-a-half years. I took a screenshot of it.”

Affection-phobe Tim arrives at his temporary home and it’s rather flash with water views, a pool and a spa. Looks like they’ve all scored luxurious beach getaways.
All contestants realise there is only one bed in the house and Man Child Ryan’s seems to only be a queen size. They act like they’re freaking out, but c’mon, just kip on the couch, guys.

We didn’t see much of the therapists tonight, whoever they may be.
That’s it for tonight. Don’t know if I can bear another episode.