Redemption round continues with the Stepsies. Which two teams do you think will get the boot after this round?

HERE WE GO …
It’s time to get Zesty with the Stepsie Besties … is anyone doing a drinking game based on the number of hip pops they are bound to do.
Last round they had issues with time management and Hazel being the only one of the pair who could cook, although Lisa (remember those four goes to get aioli to work?) was a few notches above Dee’s hapless Harry Potter hubby at least. They hope to better their score of 57 by 20 – that’s ambitious.
They’re in matchy matchy blue sundresses and – is it possible – Lisa’s eyebrows are even higher than before. 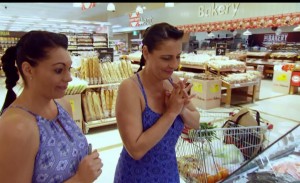 Their menu is:
Entree: Pan-seared duck breast with baby beets and rhubarb chutney (yep, Hazel will be cooking the duck – no way Lisa’s up to the skill level required to get 12 perfectly cooked breasts).
Main: Crumbed snapper with thrice-cooked chips, lime mayo and Asian slaw (better stock up on eggs if Lisa is doing the mayo. Meanwhile, Manu is not happy as crumbs are disrespectful to bewdiful fish. Robo Pete responds with an answer from one of his judge cue cards: “If they nail all these elements, it could be delicious.”)
Dessert: Zesty lime cream pie with a lemon sorbet
The girls rip through the shopping and there’s a minor drama on the way home of a police officer fan giving them a fright on the way home – someone’s going to be called into the sarge’s office in the morning.
They get home and are in the kitchen on time, with Hazel getting cracking on the sorbet. She’s worried her previous efforts have been too zesty. Is this possible with lemon anything? The more zest, the better.
They’ve taken a leaf out of Kell’s book, using bought bickies for their dessert base. Bought biscuits – in a cooking comp. and they add green food colouring to their lime curd – ick.
And Lisa gets her mayo right first time!

Here come the guests, and the girls have some lovely frocks while the Miners are not being strangled by their clothing for once. 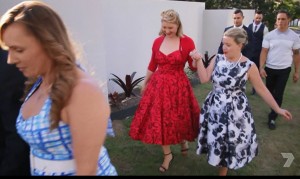 Noice … and they’ve found room in the sock budget for the miners.

In the kitchen, the ladies are happy with how they are progressing (their golden beetroot does look yummy) but then they have a hiccup the sorbet is not thickening in the churner. They decide not to wait and chuck it in the freezer. Hmmm, this could end up with too many water crystals.
And here come the judges to the sounds of Pulp Fiction’s Misirlou https://youtu.be/1hLIXrlpRe8 (it’s the one at the start of the movie when Honey Bunny and Tim Roth rob the diner.)
Poor Manu has drawn the short straw yet again in the suit department. Wardrobe just loves whipping up a tablecloth jacket, and this one is a double breaster, no less. Time to put your “pied” down, Manu. 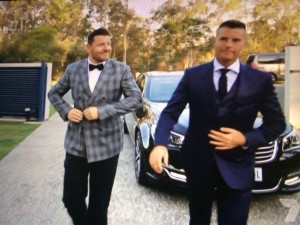 For zees soot I giff you zero points. Pete’s soot gets nine points.

Stepsies explain their menu and Nev is happy to be getting chips as it saves him a trip to Maccas later, but Feisty Cop tells the confessional it all sounds “supertron simple”. This from the chick who served that haute cuisine dish, pureed pea and ham soup. 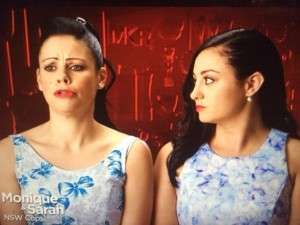 Bad cop, good cop. “At least I can furrow my brow when I’m upset.”

Back in the kitchen Lisa is cooking the duck (I was wrong!), while in the kitchen Monique is getting angsty over perceived strategic scoring. The entree looks good but they should have called the chutney a coulis. Pug Lover Cop notes the meat hasn’t rested enough as the juices are flowing.

Time to chews … and Manu does a half-hearted “Do you call this redemption?” fakeout. Stepsies: “We do.” Manu: “I do, too.” He says it’s sublime and they just needed more seasoning (and we did see them chuck a heap of salt on the duck earlier). Pete is happy and loved the rhubarb but his duck was a little under.
Lauren thinks her duck is too quacky to eat: “It’s just too alive for me.” She asks non-Man Bun Miner’s “advice” in an attempt to sow the seeds of doubt.

In the kitchen the Stepsies get on with deboning the fish, while the naysayers at the table discuss how dreadful it would be if they used bought breadcrumbs. The SA Besties and Ducks’ Nuts are bemused by it all.
Cut to the kitchen and Hazel is opening a pack of Panko but Lisa realises she doesn’t have a spare fish. Why did they not buy five extra? Especially with fish. She’s starting to freak out.

As The Botoxed One cooks the massive slabs of fish in the deepfryer, Hazel gives the chips their third cook in a frypan on the stove. She can only fit in about 10 at once so this could end up like the Cops’ first cook where each guest got about three chips as a garnish to the salmon. Why not just get another deepfryer for the chips? They do look tasty, if a bit brown – season heaps, girls, then season more.
At the table the SA Besties kill the time by leading everyone in songs from Grease. Lauren does not look amused, but could be the villain edit.
In the kitchen they plate up and it looks like tasty pub food, but you’d get more chips at the pub.

Main is served! What do you think? #RedemptionRound #MKR pic.twitter.com/ahU55eQWfs

Chew time … and it’s another stupid forced question from Pete to heighten the drama: “Do you like this dish?”. Seriously, do they write these questions at the start of each season and make the judges trot them out at least once an episode? Can’t we mix it up: “Lisa, are you shitting yourself right now? I can’t tell because your face doesn’t move.” “Lauren, do you feel bad you almost gave Rachel Khoo food poisoning?”
But instead Pete actually says: “Your fish was cooked beautifully. Your sauce … spot on. And I loved your slaw … Your chips, these are just terrible. They are soggy.” (Told you, so!)
Manu is let down after loving the entree “for a couple of ‘raisins'”. The raisins being the slaw and chips were soggy. “I’m just halfway with this dish.”
At the table Lauren and the Cops says their fish was overcooked and say the dish lacked skill. It’s true it was simple, but if done properly could have scored well given the lower standards this round.
Stepsies know they are going to have to work hard on dessert, but the sorbet is more of a slushie and they umm and aah over whether to include it. Chuck it in a margherita glass, I say!
In the dining room Man Bun makes an even more serious mistake. Watching Monique – who is getting rather loud – stacking napkin rings he mutter this to his mate: 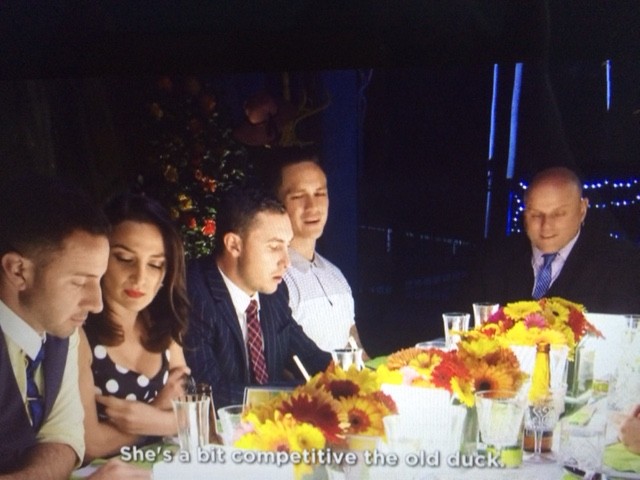 NOT a good thing to say to a) a cop, and b) someone who is yet to score your cooking.
In the kitchen the girls are unmoulding the pie and it looks fine if you’re into lots of cream and American-style desserts. Some slices are starting to melt and they decide Lauren will get the saggiest one.

Chew o’clock… and all is silent but the clang of judge’s spoons as they try to hack through the thick biscuit base.
Pete says the pie is good but not great and he hates the overly sweet sorbet. Yep, good decision to cut back on the lemon, girls. As Manu says, chemistry is involved (and wouldn’t Lisa kill to have chemistry lessons from Manu) and it wouldn’t ever have set. (Here’s a good article on how not to wreck sorbet http://tinyurl.com/zkuqqrq)
“Your pie – the bottom layer is too dense and too thick. Is it good enough for this competition? I’m not a huge fan of it.”
Manu, however, didn’t mind the pie, apart from the chunky base. (Why don’t any of these teams provide dessert forks?)
Poor Hazel is particularly cut and we can’t read Lisa’s expression because it’s been botoxed away.
More footage of Lauren being Lauren and Feisty being Feisty, while the SA Besties and the Miners are polite and we don’t get much footage of Nev and Kell.

Tonight it’s second chance time for the Miners, followed by SA Besties, but the promo is really about the looming battle between Lauren and Monique, who in a complete coincidence have been seated opposite each other both nights.