Here come the contestants in their casual gear but with kitchen clogs on and – yay – Colin Fassnidge is back, keeping Pete Evans company (reminder – Zana and Plus One, Dads/Besties and Italians get to sit this one out for being the top scorers of their rounds). Who did you forget was still in the comp?

Your favourites are back tonight! Who did you miss? #MKR pic.twitter.com/rlog0lWYH9

The Fass announces they will be cooking a family bouffay for members of the public at an arsehole club (gotta love that Irish accent – we usually call it the Rissole, but I get puzzled looks from SA friends when I do that). They’ll be cooking for 100 RSL diners who will pay what they think the meal is worth.
Dish of the day winners gets to skate past two eliminations – a worthy prize. They’ll be working as two groups and chaos ensues as they have to pick their own teams. Lauren and Carmine are particularly torn but end up with Duck Nutters and the crew from the Nutters’ restaurant round.
It’s off to Coles to the tune of Barnsey and INXS’s version of Good Times.

So the Black team is Duck Nutters, JP and Nelly, Miners, Laurine and Carmine and the Sisters, and they choose the theme Mediterranean because it covers so many cuisines (well, except the Sisters, but they’re overruled).
The White team is Curlies, Tarq and Dad, Rosie and Paige, Anna and Jordan and Mr and Mrs Chops, who choose Asian, which would be my pick. The stronger cooks of the comp are in this team, and no real drama queens, so they should do well.

White buffet:
Curlies: Red Chicken Curry with red rice and a pickle (and good on her for buying up all the fresh chilli – better to be oversupplied)
Chops: Vietnamese Prawn Salad (will be quick once they shell the prawns)
Dad and Tarq: Roasted pork belly
Rosie and Paige: Five Spice Duck
Anna and Jordan: Satay beef with homemade egg noodles (ooh – brave decision on the noodles)

So, no desserts? Perhaps they had to be mains. Hope the punters at least get a crack at an all-you-can-eat ice cream machine afterwards with some diced jelly.

Black buffet:
Duck Nutters: Crumbed prawns with Mediterranean salsa (Kell’s right – everyone goes for prawns at a buffet)
JP and Nelly (who seem to be the team leaders): Chicken shish kebab with harissa pumpkin (that’s a lot of skewers to thread)
Miners: Filo cups with salsa and grilled peach (sounds weird, guys)
Laurine and Carmine: Spinach and ricotto rotolo
Sisters: Moroccan Lamb Stew (do they have time to do a stew, even in the pressure cooker?)

The black team are so chillaxed they are having a singalong (but Lauren and Carmine aren’t joining in – not that we get to see anyway). It’s a tight squeeze in the kitchens – let’s hope they’ve considered who will need what cooking equipment once service starts.

Mr Chops is defending his use of ginger and garlic from a jar (and, yes, I have those in my fridge for when I’m pushed for time, but you are on a cooking show, guys). He and the missus are laboriously prepping prawns.

It’s all a bit frantic because there are so many bloody teams. The Fass is worried that Rosie and Paige’s duck will be tough, given the tight timeframe. Jordan is madly rolling egg noodles and, if they work, the judges will definitely be impressed. Pete is worried Duck Nutters won’t finish prawn prep in time, but Nelly jumps in to help. Lauren and Carmine debate whether there is enough salt in their dish – given they were criticised for bland polenta last round, they should be upping the salt.
Uh oh – the sisters didn’t properly close one of the pressure cookers. Nelly is looking stressed. Go have a herbal tea, Nelly.
The teams start doing their blackboards and we learn a) Tarq’s Dad has lovely writing and b) Nelly can’t spell rotolo or crumbed. Or Mediterranean. Aargh – it hurts my eyes. Plus, why doesn’t it say Lauren’s Amazeballs Rotolo? 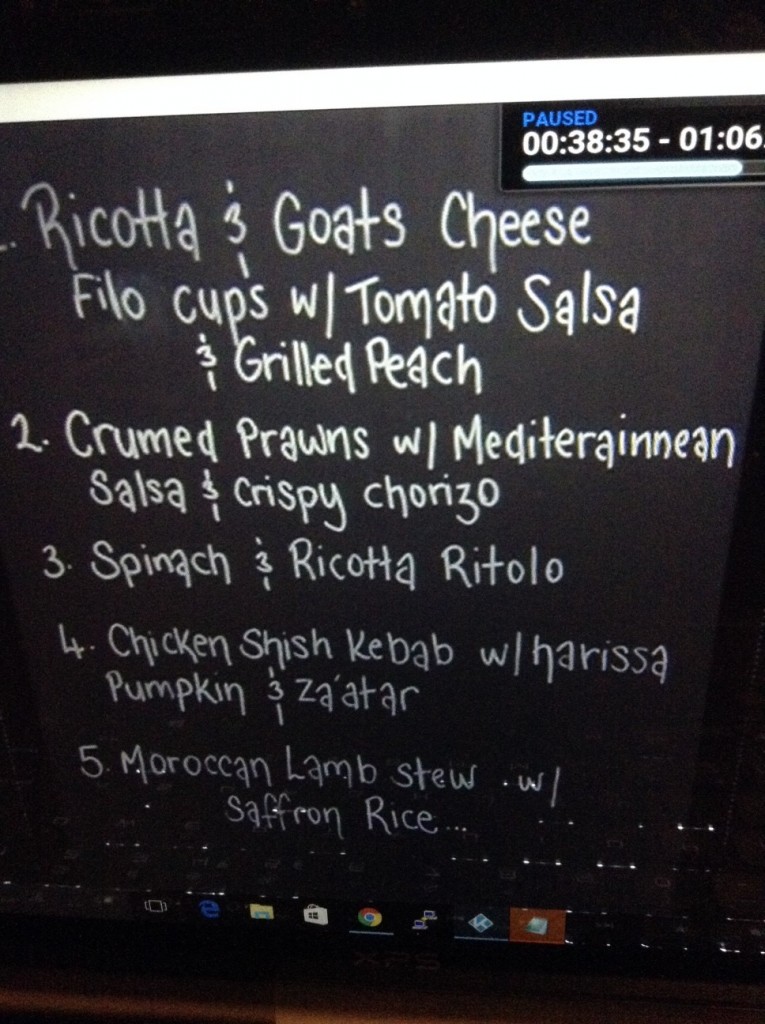 Mike and Tarq have a chuckle at the errors. Glad at least one of the teams can spell.

The judges are worried the Miners’ filo cups will go soggy, sitting on the buffet. The Sisters have to cook rice the old-school way, in a pot. “We can’t be the Asians who can’t cook rice,” the younger one says. I’m with them – a rice cooker gives a reliable result and so less messy to clean.
Mr and Mrs Chops have finally finished peeling their 160 prawns and Chops gets onto his jar-based salad – coincidentally just as the judges walk over. The Fass ain’t impressed. I hadn’t realised they’d bought bottled lime juice, too.
As predicted by The Fass, the Besties are having trouble with their duck – it won’t shred easily.
Luckily the Sisters’ Asian cred is saved as their rice works.

With 15 minutes ago, Curlies “need a fresh mouth” to check their curry isn’t too spicy and Rosie gives it the thumbs up. Everyone is frantically plating up. Jordan helps the Besties plate up and no-one has enough room to move. If only they’d been allowed to use both side of the bench.
Time’s up and everything’s sitting there on the bench, going cold away from the heat lamps. It’s time to serve and we see it’s filmed at North Ryde RSL in Sydney.

Time for the White Team judging …
Mrs Chops is doing a good job chatting with the public as Chops lurks in the background. The judges are a bit underwhelmed by the flavours.

Curlies’ curry get the thumbs up from the judges for the spice, seasoning and texture. “I would go back for seconds,” says Colin.

Rosie and Paige’s duck is a bit dry, even with the watermelon, and the judges can’t taste the meat.

What did you think of #RosiePaige's Five Spice Duck and Watermelon Salad? #FamilyBuffet #MKR pic.twitter.com/6uAVClyqjo

Dad and Tarq’s pork belly looks lovely and colourful, thanks to the red cabbage, but there’s not much crunch to the belly and Pete doesn’t like the cabbage. Colin knows they can do better. They’ll be safe.

Jordan is the ultimate salesman for his homemade egg noodles and that should win them a few extra bucks from the public.
“I commend them because I’d written this dish off,” says The Fass, saying the noodles worked but some of the meat was overcooked.

And the Black team …
JP and Nelly’s chook kebabs are moist, says the judges, and they like the harissa pumpkin. As one customer rockin a mad beard sans mo opines: “It’s not a bad feed.”
The judges try Duck Nutters’ crumbed prawns and bemoan the lack of soz. Pete says the chorizo is the star of the dish, and the prawns aren’t crunchy.
Carmine and Lauren’s rotolo looks pretty but it’s hard for a veg dish to win these kind of public-voted competitions, Colin is glad not to be at risk of food poisoning from this pasta. The judges like it.

The line for the White Team’s buffet is long, so Gareth (Man Bun) goes over to try and entice the crowd to skip queues and ends up the target of some young women.
The judges try his filo cup (while the girls want to cop a feel) and discover there’s hardly any filling.
Time for the Sisters’ lamb stew and Colin likes it the texture and spicing. Pete: “Amazing.”

Now it’s time for the public to pay what they think the buffet was worth and, as usual, everyone low balls, given modern RSLs aren’t as cheap as they used to be. One delighted customer says: “Four out of the five dishes were superb, so $12.”
Another woman who looks a character reckons $5 is generous, so the producers take her name and number as a potential 2017 villain.

The judges give their official critique and praise the White Team for an enticing menu. Jordan wins the judges over by interjecting when Pete questions the wisdom of making their own noodles because the guests couldn’t tell the difference between bought and homemade: “Yeah, I told every single one,” Jordan says, to much laughter.
Fass has a crack at the Chopses and, fair enough. Rosie and Paige look knackered and Pete’s “bitterly disappointed” hurts. The Curlies are stoked to hear Pete say their curry was “sensational” and that Colin “couldn’t fault it”.
Mike and Tarq get a mixed review while JP and Nelly get the “it tasted a lot better than it looked”. The Miners make the fatal mistake of not tasting the food and telling the judges they didn’t taste the food. Oh, boys, you’re nice lads but it’s obvious you’re not going far, just like the Chopses.
Carmine and Lauren look anxious and are delighted with Colin’s: “When I tasted your dish, it was bang on.”
Nev is disappointed with the criticism and Kell is as impassive as usual.
Tasia and Gracia are packing it so are relived to hear Pete thinks they nailed it. Colin tells the other teams they are a threat because they did so well outside their comfort sign. Yeah, nice one, Colin, putting a target on their back.
Mitch and Laura get the win and are safe from the next two eliminations and their team is also safe. Yay. Chops have had a lucky escape.
Nelly and JP are devo and crying in the confessional. It must have been a very long day. All members of the Black team will cook for their lives tomorrow.

Tomorrow
The first sudden death cook off tomorrow night will be judged by Curtis Stone – does this mean they’ve pinched Marco Pierre White’s prodigal son from MasterChef? The other teams get to judge, too, so it will be interesting to see how much weight their scores are given.
Which means Zana’s back on TV tomorrow, if not in the kitchen.