Tonight is Lauren’s chance to see if she can improve upon her seafood pasta in a bag.

Do they have the main in the bag?! #MKR pic.twitter.com/qfiGLxbFL9

What score do we think the cops will give her?

RECAP BEGINS
I’m off to a late start (had a four year old not wanting to sleep), so recap will be bitsy tonight.
We start with a reminder of Lauren’s MKR history (how could we forget, Channel 7, when you promo her antics relentlessly) and the shots of her cooking to the tune of Eminem’s Lose Yourself – the theme from 8 Mile. Yeah, Lauren’s a scrappy underdog who grew up trailer trash and has come on a cooking show to prove herself. Perhaps these lyrics relate to the after effects of the aforementioned raw seafood pasta?
His palms are sweaty, knees weak, arms are heavy
There’s vomit on his sweater already, mom’s spaghetti
Oh, yeah, and there are a few shots of Carmine, too. We’re reminded two teams will be eliminated tonight as none of them are “seff”.
We’re reminded they are from Adelaide with shots of Glenelg, Adelaide Oval, Rundle St and the bridge over the River Torrens… Pity the brilliant Central Markets did not get a guernsey.
They start with a morning smoothie (what’s the go – are they hoping to open a juice bar after MKR?) and we get flashbacks of their seafood disaster, so at least we get to see the lovely Rachel Khoo again.
Oh yay – they ARE at the Central Market getting their seafood. Please cook it properly this time, guys, and show off the beautiful SA produce. They also get their lamb shanks from a local butcher, then head to Coles.

THE MENU
Entree: Saffron cockles and mussels and croutons
Main: Oven-baked lamb shank on soft polenta with gremolata (if we were out and saw this on a menu, this is exactly what Mr Juz would order)
Dessert: Lauren’s famous mud cake (really – another cake? Someone, please do a panna cotta or a pav at least)

It sounds good but the main is going to take a long time to cook, so they’d better motor. We’re reminded they previousy scored 51, which was the lowest score of the remaining teams. So if the judging twist turns out to be “most improved”, they are in with a shot.
EXCEPT when they finally get in the kitchen the clock already says 2:38. Not good, guys.
They get started on the lamb stock and cleaning the seafood and, to the tune of Fame, Lauren starts making her famous mud cake, and at least we saw her buying decent Lindt chocolate. Only after the cake is in the oven does she start the gelato – it’s looking like it will be another MKR puddle ice cream.
And here come the guests and the Stepsies are back in their twinning outfits. Urgh. Paige and Rosie look nice but the Miners are back in their too-tight, too-buttoned-up shirts. 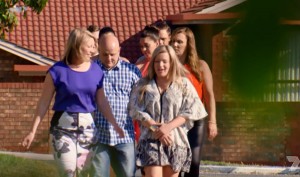 They always hide Nev and Kell in the middle.

It’s a bit awkies with the greetings, despite Lauren being the kindest, nicest contestant in the history of MKR.
Carmine welcomes the guests with: “We hope youse have a lovely evening.”
They head back to the kitchen to take the cakes out and OMG they haven’t even browned the shanks yet, and they will take at least two hours to braise in the oven, and given they are doing so many, more like three. Lauren’s not fazed: “I don’t actually care. They can just wait because these lamb shanks are going to be perfect.”
Famous last words, Lauren.
And then, uh oh, they ordered 14 lamb shanks and they only have 12 so they don’t have spares for a tester. Lauren is rushing and the shanks aren’t that brown by the time they go in the oven.

And here are the judges and this is the first time Lauren and Carmine have cooked for them. They run through the menu and we learn Kell does not eat mussels and cockles (and Paige is not keen, either). We know Ducks Nutters will score low anyway, so it won’t make a difference. At the table the Stepsies remind everyone of last round’s disaster in a bag. Talk turns to who’s on the bottom and Man Bun Miner puts his foot in it, saying there could be some strategic scoring from people looking to save their skin.
Lisa is not happy that he was looking at someone (I think the Cops) when he said it. Shut up, Man Bun!

In the kitchen Lauren is making croutons out of shop-bought bread. This is the woman who bagged out other teams for using shop-bought breadcrumbs! Come on, Lauren: If you haven’t grown the wheat yourself I don’t want to know about it.
In the dining room Monique and Lisa have foot-in-mouth Miner in their sights and he is wishing he could hide under the tablecloth right now, until Hazel steps in as the voice of reason: “I think we just need to stop it and move on.” She seems like quite a nice lady – if only she had a different MKR partner.
Lauren is wisely separating the seafood from the hot broth so she can check if it’s cooked and they actually taste it this time. It’s a generous serve for an entree.

Lauren is confident of the outcome as the dish is “amazeballs”.
It’s chew o’clock … And Manu is happy they cooked the seafood with respect: “Fantastic, beautiful, gorgeous.” They kept it simple and delivered. They are rightly stoked and Carmine is tearing up. “Liquid gold,” says Pete. “If you travelled through parts of the Mediterranean, that’s what you’d get in a beautiful seaside restaurant. Just like that.”

The guests taste and Kell at least tries a mussel, then makes a face. Hazel: “I’m in love with this dish; I could inhale it.” Paige is converted to shellfish. Kell is not but she at least she makes it clear the dish is not to blame. Nev loved it, as did Feisty Cop.

In the kitchen, it’s time for a Manu pop-in and he asks Carmine for a cup of leftover broth. 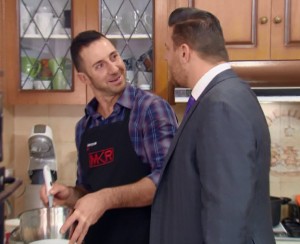 “Do you want a take-home pack?” Lauren asks. Yes, he does, and they put aside a container full for him. They are ecstatic. Now I really want to taste that broth! Hopefully they’ll start a broth stall at a market near me somewhere. Remember Jessica (as in Bree and Jess) from a while back? She runs a stall at a groovy market not far from my place and has just launched her own line of cake mixes in SA’s excellent Foodland supermarkets http://www.messyjessy.com.au/
Lauren and Carmine get to work on stirring their polenta and then fossick through their lamb shank trays for a piece of meat that’s fallen off for them to taste. They are happy. However, just because one scrap of meat is cooked it does’t mean a huge shank is. They plate up and don’t put much soz on. Where’s the soz guys? I would have liked some token broccoli to green it up.
Says Lauren: “This is our Sure Shank Redemption.” Yep, a producer totally just told her to say that.

Will it be Shawshank Redemption with the main? #RedemptionRound #MKR pic.twitter.com/mw33MyfXzJ

Chew time … Manu says the meat is falling off the bone, the soz is a bit too thick but the polenta is way bland. Pete criticised the lack of soz, especially given the lack of seasoning in the polenta.
However, Man Bun is in heaven, picking up the bone to chew the last shreds of meat and suck the marrow out with a straw. “I’m getting into this bone like a ravaged [that’s what it sounded like] dog.” One of the others hands him their bone to suck.
And then Monique discovers hair on her plate, but when she is asked what she thinks of the dish she says it was divine. Kell calls BS on her for not being honest but, interestingly, Monique says she didn’t mention having a hair in her dish at a previous restaurant. Do we know where this was? I only remember Lauren getting a hair from Stepsies.

Lauren is checking on her famous cakes and she’s happy. She’s making a mirror glaze and for a while it looks as though the chocolate has seized, but she’s panicked too early and it seems fine.
They plate up and it’s all rather basic, with three teeny drops of coulis. Where’s the soz? Where’s a crunchy element? The ice cream looks overly frozen.

Will it live up to it's name? #RedemptionRound #MKR pic.twitter.com/Hd1e3iqnjq

Time to chews: Pete says the sugar in the icing has not dissolved and the ice cream is icy and flavourless. Manu says the cake does not have the muddy texture it needs: “It’s a pleasant dish to eat, but it’s far from being perfect.”
The guests echo their comments and Monique is glad to finally let it rip. But it’s Lisa who goes for broke: “I think the ice cream is icy. It tastes like one of those $2 home brands. I would be embarrassed to put my name to this …” This is the woman who served lime cream pie with green food colouring and a sorbet slushie at her last instant restaurant.

And now to the twist … Yes, it’s determine by how much you have improved. Everyone is frantically trying to do the maths in their heads. Monique knows she’s done for.
It’s a bit rough on the teams who performed ok in their first round.
The Cops and Stepsies are gone, so, phew, there goes some of the drama. 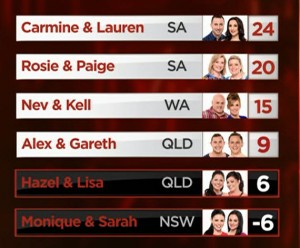 And here come all the remaining teams and there are so many people I’d forgotten (Curlies, Chops, Sisters, Sweet Nellie and Whatisface who went looking for brulee torch gas). It’s going to take forever to get through this lot.
Zana and Plus One, Dad/Mates and Italianos are announced as safe for the first round as they won their initial rounds.
The promo shows some kind of Olympic Stadium challenge, then says that for the first time they’ll have to work together. Really – MKR is finally getting on the MasterChef team challenge bandwagon? They usually suck – I much prefer the individual rounds. Guess they have to up the drama with Stepsies and Cops gone. And I AM looking forward to seeing Zana cooking near a cow. Germs! Eeek!