I love that every phrase out of Lauren’s mouth is the way I speak to Mr Juz sarcastically: “totes unfair”, “amazeballs”, “devo” … I’m just waiting for her to drop a “whatevs”.
And here she is, “devo” that she was on the losing Black team from the Rissole challenge, despite getting a good critique from Pete and Colin.
At least she gets to be in the presence of the real Curtis Stone and not just the cardboard cutout they have at Coles.
And their cooking challenge? To produce a “fresh banquet” using seasonal produce. So, no bottled lemon juice?
Pete explains the rules: the judges pick the worst dish and its makers will cook against a team selected by the guest teams.
Cut to shocked Zana face and Lauren freaking out. 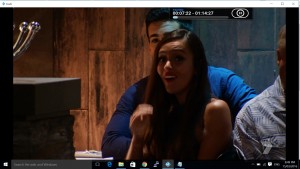 There’s a camera guy whose only job is to get Zana reaction shots. He’s a busy bloke.

They have 60 minutes – not long at all given they have to find their way around the pantry and kitchen.

The dishes are:
Miners: Asian omelette with soft-shell crab and citrus glaze. Does an omelette need a glaze? Is it more a dressing? At least the crab component sounds more complex than their pathetic filo cup effort.
Duck Nutters: Pepper steak on mushroom with feta salad. Sounds boring and not much work for 60 minutes, even allowing for resting time. And Nev is peeling the mushrooms. Why??
Laurine and Carmine: Mushroom ragu with crispy polenta. Better bam up the salt in the polenta, gice.
Sisters Tasia and Gracia: Crispy Pork Cakes with apple and pear slaw and sweet chilli sauce. And I know that sauce won’t come out of a bottle – looking at you, Mr and Mrs Chops.
JP and Nelly: Who knows what they are making. I’m too busy hurling after he tells her he needs to marinate the steak and her response is “I love you”. Apparently it’s Beef tostada with guac and mango salsa. Some decent technique required there.

The Miners are burning their mini omelettes – turn down the heat, Man Bun! And just make big omelettes and slice them up.
Pete is impressed by the Lovebirds’ energy but worried the others are looking stressed.
Hooray – the Miners decide to make a big omelette.
With 22 minutes ticked away it seems Duck Nutters have yet to put their mushies in the oven. This is what happens when you stupidly peel mushrooms. What have they been doing all this time? Seasoned and browned some beef and made a herb butter?
Carmine and Lauren reckon their polenta has heaps of cheese and seasoning so she starts cooking their (unpeeled) mushies.
The Sisters have made quite large pork “meatloaves”, in effect, to steam. Smaller ones would cook more quickly.
Over at the Lovebirds’ station Nelly reckons the fumes from the deep fryer hurt her eyes so JP has to come rescue the damsel in distress. Urgh. And why are they using whisks to hold down their tostadas? Metal whisks + boiling oil = accident waiting to happen.
Cut to Duck Nutters and the watery mushies look like rubbish and Kell feels the same, but as usual her face is so impassive we can’t tell what’s going on. She walks off to the wing with a “sorry, babe” and someone from the medical team comes over. Kell says she’s nauseous. Always a good thing to hear a cook say before you have to eat their food. The clock now shows 20 minutes to go. Nev carries on on his own and gets a Miner to taste his beef.
But the Miners have their own problems, one of which is their omelettes look overcooked and they do little cookie cutter circles out of it. Nooo! Just do big slices and fold them, boys!
Carmine and Laurine are stuffing up their polenta discs – they are sticking to the deep fryer. On the sidelines Zana says they’ve cut the discs too thinly. Her mushroom ragu looks very thin.
Nev is frantically plating up on his own – luckily he picked a simple dish.
All of the dishes look like they will be quite tricky to eat without a giant bib.
The judging
Lauren is confident they have a “crackin'” dish. Manu says it’s not a good-looking dish but the polenta is well seasoned. And Curtis backs up Zana’s call on the thin polenta. Some guests’ polenta is falling apart an Zana says the mushies have been stewed.

Curtis says Duck Nutters cooked the beef well. Manu thinks the feta and raw capsicum don’t really go and it’s underseasoned. (Unfortunately MKR’s Twitter account posted pix of several dishes that were not from tonight’s show – Kell and Nev’s supposed dish appeared to be seared tuna nestled in a pastry cup) – so I’m missing quite a few I don’t have time to get screengrabs for. If they rectify it I will update pix tomorrow.)
The Miners’ omelette is “too eggy”, says Curtis, but he likes the crab.

The Lovebirds’ tostada gets the thumbs up but Curtis would like less mango.
The Sisters’ pork dish inspires Pete to utter one of my pet hate phrases: “It’s quite a unique dish.” Pete, it’s unique, or not – there’s no quite unique. He says all the elements have flavour. Curtis: “If my local dumpling truck sold this I’d go there again and again.” But Manu thinks the sauce is too sweet, and Mrs Chops agrees.
The safe teams are handed scorecards. 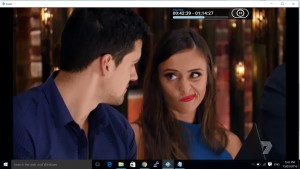 Winners and Losers
It’s time for the critique and we learn Kell is feeling better. Otherwise, we don’t hear much new. The Sisters get the highest praise and Curtis says they are his faves. These girls are improving in leaps and bounds after a mediocre instant restaurant. Pete says Duck Nutters are in sudden death. The teams’ pick is Carmine and Lauren.
Lauren clearly thinks they’re being picked on but as Jordan tells the confessional: “Their dish was one of the worst. You deserve to be there Lauren.”

Sudden death
Oh, we’re doing sudden death tonight? This is taking forever. And there seem to be even more ads than usual.
They have 90 minutes to produce a salvation dish and Carmine and Lauren will surely win.
Duck Nutters: Crispy skin barramundi with puttanesca sauce. Sounds simple.
Beef ragu with fettucine. More ragu! More pasta! At least do a differently shaped pasta.

Chief Nut says he is going to top the fish with the sauce, which will ruin any crispy skin. Hopefully he changes his mind and puts the sauce underneath. Nev is freaking out under the pressure and massacring the barra, cutting it into different sizes. I noticed Kell wearing gloves in the previous round. Is that because they are worried she might have something contagious? The Miners show support with “Come on, Mum and Dad.” One of the Italianos throws Lauren a token cheer but it falls on deaf ears. Carmine puts his concreter muscles to use cranking out the pasta dough. Lauren comes out of the zone for a bit of banter with her fellow Italians.
Duck Nutters are cruising and Nev chargrills the eggplant but doesn’t want to it in the oven “too soon”. I see raw eggplant in his future.
With 22 minutes to go Lauren and Carmine’s pasta water is not yet hot. Put it in smaller pots, guys. Did you fill it from the hot tap to start with? They decide to split it into smaller pots – yay.
A watched pot never boils – especially when the watchers are your MKR rivals. They chuck the pasta in anyway so they can get something on the plate.
Plating up is a mad dash and while Carmine and Lauren’s looks sloppy it looks more enticing and they showed more skill. 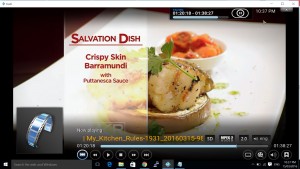 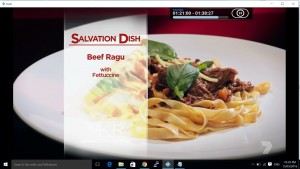 Time to chew …
Curtis has flown the coop so it’s just Pete and Manu at the lords of the manor table, looking down at the peasant cook.
Laurine and Carmine lie and say they like their pasta “very al dente”.

Pete says the pasta was cooked well and the sauce had decent flavour given the short-cooking time. Manu agrees the plate showed signs of stress.
The eggplant was undercooked – picked it – but the fish had crispy skin.
Manu reckons it was “thees close”. Surely technique will win out?
And it does. Bye, bye Duck Nutters. Kell finally shows some emotion. Manu thanks them for teaching him the phrase “the ducks’ nuts”.

Tomorrow night: An Olympic-sized challenge and everyone has to cook.