As we shed a tear for the now-dead-to-us Italians, it’s time to see how the contestants fare with an outdoor challenge. Will some of them learn from their mistakes with the Olympic challenge?
Now we know it’s a seafood challenge, as this is a behind-the-scenes video of the contestants at the Sydney Fish Markets. It’s nice to see them all looking relaxed for a change.
https://au.tv.yahoo.com/my-kitchen-rules/clips/31161331/behind-the-scenes-fisherman-s-challenge/#page1

Looks like a lovely day to be on the waters of Sydney Harbor and the Lovebirds are doing the Titanic pose in the bow. However, Zana is not thrilled to be on a boat.
“There’s sewage in the ocean. I don’t like it,” she says. Ah, Zana, what was once infuriating to us is now hilarious.
Jordan fans (looking at you, Windsong) feel free to sit this one out as he and mum are safe after winning the Rio challenge.
Pete and Fass welcome contestants to Cockatoo Island but announce cryptically that Rosie and Paige are absent due to the latter having an accident and being told to sit out on doctor’s orders.
Thanks to Twitter I found out she seriously injured her hand while trying to show Rosie how to fillet a fish with a blunt knife in their hotel room. She ended up having to have hand surgery and still has trouble. If you click through the Twitter link you’ll get more deets.

Stress less #MKR fans – Paige is BACK! She had a bit of a nasty accident with a snapper https://t.co/TdPwwbldhE pic.twitter.com/DZ2GYOBDuf

Back at Cockatoo Island the contestants have an hour to prep and cook a dish of cockatoo – ah, seafood, for 100 fisherfolk. There’s going to be lots of tedious peeling prawns, pinboning fish and debearding mussels, which is why I tend to order seafood when I eat out so someone else does the hard yards.
Curlies (Mitch and Laura) are doing snapper remoulade with charred fennel and beurre blanc. Fancy! Perhaps it’s a good thing to be cooking French food when Manu has the day off.
Mr and Mrs Chops are doing pan-fried ocean trout with garlic aioli [there’s a tautology for you] and cauliflower chips. The chips sound yummy. They are happy and confident about cooking fish, so I’m waiting for them to flatline.
Zana and Plus One are doing salt and pepper squid with rocket and radish salad and spicy aioli. Should be quick to do in the brief prep time and is a good dish for a hot day.
Lovebirds go for herb-crusted tuna with tomato and bocconcini salad with crispy chips. So glad they didn’t go for that more pleb option of soggy chips. Uh oh – Nelly is writing on a blackboard again. Remember what happened last time she was let loose with chalk? 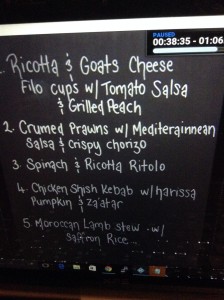 From the RSL challenge.

That massive slab of tuna would be worth a bomb, so I don’t blame JP for being nervous.
Lauren and Carmine are doing crispy skin salmon with asparagus and lemon butter sauce. Lauren has the spiraliser out and is doing oodles of zoodles. Hmmm … is zucchini really the way to a fisherman’s heart? I’m over salmon – it should be banned from the comp.
The Miners are making crispy skin barramundi with noodle salad and Asian beans. Do they mean snake beans? No, they look like regular beans and he’s going to throw in some hoisin and soy to Asian it up. Please don’t stuff it up, lads – you did so well on the Olympic challenge.
The seagulls are giving everyone the shits, especially Zana. I really hope one poops on someone.
Like maybe, Lauren, who in a flash of self-depreciating humour admits the convenience of technology is to blame for making her forget how to spell asparagus. But she’s way above Nelly level.
Time to fast forward through the adds for Coles’ Easter seafood specials. If you are buying seafood for the weekend, would you really buy it at Coles?
Chris and Cookie are doing tempura prawns with wombok salad and dipping sauce. That’s a whole lotta peeling and poop chute scoopin’. If they can power through the prep it should be a winner.
The Sisters are making spicy coconut mussels with lemongrass rice. Again they are worried about not having a rice cooker, but it worked out for them last time.
Tarq and Dad (geez – is there never an end to these contestants?) have Singapore chilli crab with egg noodles and coriander salad. This would be my pick to order, as they are fiddly beasts to prep and cook properly.

Zana is deep frying olives to put in her salad. I’ve never had one but it sounds fab.
Halfway through prep time Carmine and Lauren have not touched their fish, instead concentrating on their 1001 accompaniments.
Fass comes over to check on the Miners and gives them numerous hints their plan to cook the fish in the oven and then crisp the skin in a pan is a bad one. Seriously, guys – even the fishmonger told you to do the skin in the pan first. But fate intervenes and it seems their oven is not even switched on. So they’ll have to start it off in the pan now, surely? Did Fass sneakily pull out their electrical cord to save them from themselves?
Fass heads over to Lauren and Carmine to put the wind up them for doing candied walnuts when they should be cooking salmon.
The Sisters are getting frazzled but bickering is the way they work best, so they should be fine.
JP is having tuna dramas with the heat of his pan and the crumb falls off, and Carmine and Alex are stuffing up their crispy fish skins. The perils of cooking outdoors on a commercial stove.
And here come the fisherfolk on their trawlers and narry a yellow oilskin jacket or chunky blue jumper in sight. They are all dressed rather prettily. Time for the judges to taste.

The judges like the light and crunchy batter and tasty sauce.

The cauli chips are crisp and delish , the aioli is yum and trout cooked properly. Hooray – a good dish from the Chopses! Perhaps they are finding their groove.

It looks good. “Beautiful,” says Colin. “Clever,” says Pete. Some woman in the crowd says she doesn’t eat much seafood but she likes this. Is she a ring in? Is this like on Farmer Wants a Wife when the girl who hates seafood put her hand up to date oyster farmer Jedd?

We cut to the Miners gaining confidence until a customer brings back undercooked fish. Aargh. There’s another one. And more. Why not ask the customers for tips – they’re the experts. Well, just not that one woman.

Fass is happy they at least did not oven bake it and his fish is moist. Pete agrees but his skin is burnt and he makes a “ho-hum” face regarding the rest of the dish.

“Yum,” says Pete. “How good is that sauce?” The rice is not perfect.

People are lining up for Carmine and Lauren’s salmon. You can have salmon any time – get out of your comfort zone, peeps. It’s free food – try it!

There’s no elegant way to eat crab and Colin must be hoping wardrobe has a good trick to get sauce stains out of the dapper beige jacket in which they’ve dressed him. Pete: “That is cooked to perfection. This dish is a knockout.” Colin likes the dressing on the noodles, too.

Pete’s salad is “a little bit limp and sad” but the salmon is cooked properly and they respected the fish.

Colin is disappointed with the lack of herbage: “I’ve got some badly chopped basil on top.” The tuna is well seared but it’s missing a dressing or soz.

So the bottom will be the Miners and Lovebirds – two of the weaker teams.

Time for the judging critique and it goes as expected. Colin gives Chris and Cookie’s prawns his dish of the day gong. And we can’t do a recap without a Zana face: 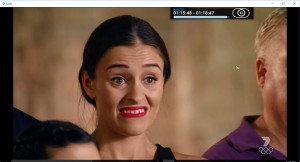 Nice to see the Chopses so happy with their praise from the judges. Colin bags them for calling four green beans on a plate with some sauce “Asian beans”. Tasia and Gracia’s sauce was the best Pete tasted today. Pete tries to fake them out that they are at risk, but no way.

People’s Choice goes to … Carmine and Lauren. What the …! They are safe from the next two eliminations.

The teams the judges are sending to Sudden Death are Alex and Gareth, who take the news graciously, and JP and Nelly. Called it!

I’m thinking JP and Nelly have a better grasp of cooking but Nelly could have a meltdown in the kitchen.

We get the teaser of Manu saying: “I’d prefer to have no soz at all then to have this.”

Sounds like another race to the bottom, which is such a comedown after the last Sudden Death cook off.

Who do you think will win?