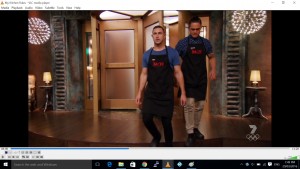 Last time through the doors of Kitchen HQ for …?? 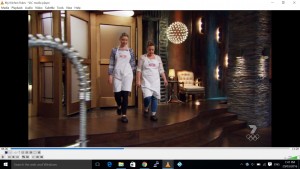 You’d think Besties have this in the bag but Rosie is right – they’ve never felt the pressure of Sudden Death before. No mention of Paige’s injury as yet.
Manu’s back. Dammit. Thought he might have gotten lost on one of his “My France” jaunts and we could have lured The Khoo back.

The Menus
Miners (who are going with a chilli theme)
Entree: Five spice prawns with papaya salad and coriander dressing (just don’t put honey in the dressing like last night, lads)
Main: Snapper with green chilli coconut broth
Dessert: Doughnuts with chilli chocolate ice cream and rhubarb
All sounds delish if they can cook the seafood properly and balance their flavours.

Besties (Middle Eastern comfort food)
Entree: Cauliflower fritters with yoghurt soz and tabouli
Main: Roast quail with peas, mint and speck
Dessert: Flourless Persian cake with rosewater jelly
Yum, although I’m not mad on rosewater. Prepping quail is going to be tricky for someone with a thumb injury.

Strangely Rosie is not following the strategy of the teams in the last sudden death round of using packet stock and gallons of red wine to make her “juss”. Perhaps that’s why Manu was absent for the movies challenge – too much bad jus-jus.
Jordan yells out to a deboning Paige: “For every quail you do I’ll give you 10 kisses.” She shoots back: “Jordan, I just got slower; it’s weird.” Yep, they need to stay and HOLY MOLEY WHAT IS MANU WEARING?
I only had half an eye on the screen until now and missed the gloriousness of this: 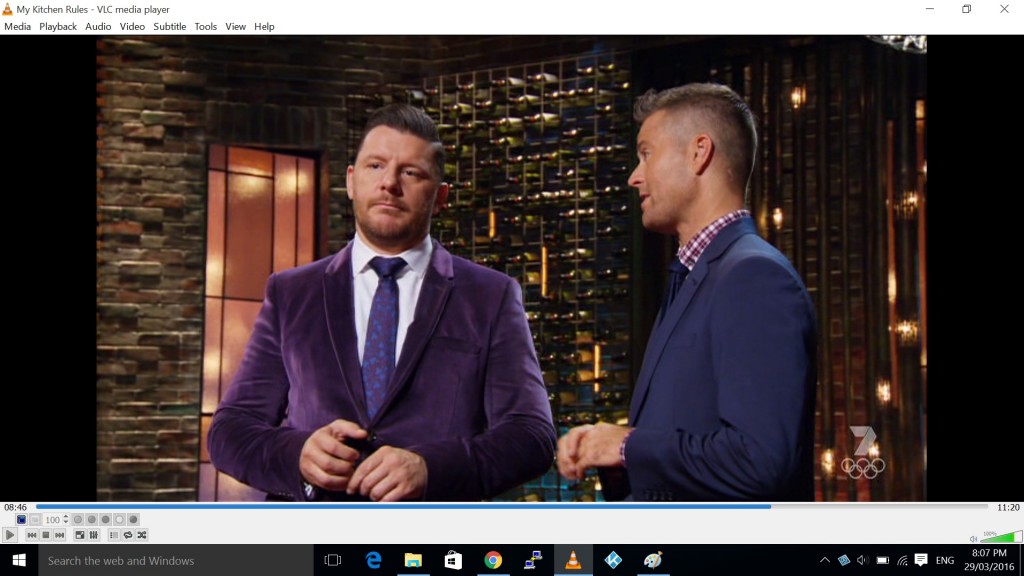 Looks like our main sideline commentators tonight are Carmine (Has Lauren lost her voice? JP and Nelly did mention she had been sick), Zana and Jordan. 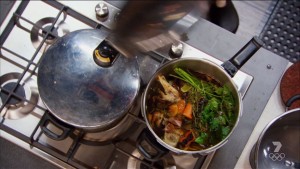 Miners and Lovebirds – this is how you make a stock.

Rosie is going like the clappers doing a million jobs while Paige is stuck on Quailgate, and the deboning is sending Paige a bit loopy. Rosie has to tell her to stop mucking around and you can see the stress starting to creep in. Keep it together, girls. These quail better be worth it. Imagine if they spend all this time on them and then overcook the meat.
With about half an hour to go Paige ditches the quail and gives Rosie a hand so they can at least get an entree out.
Over on the Miners’ side Alex is using a mandolin without the safety thingy and I can’t watch because that’s how I ended up in hospital years ago while making a potato bake (there’s a happy ending to the story – none of the blood got on the potato bake).
Luckily Gareth realises he forgot to put garlic in the curry paste. If I was Alex I’d be tasting everything Gareth was in charge of.
Gareth starts cooking their tempura prawns and – god love him – says he is “chooffed” with himself.
Plating up is done in the usual rush and both dishes look tasty.

Entree judging: The judges love the prawns and the dish as a whole, but wish they’d bammed up the chilli.
And they love the girls’ dish. Fass: “Cauliflower is the new rock star vegetable of the world at the moment.” Pete says it’s slightly better than the prawns.

Mains round
Paige gets back on to those damn quail while Rosie starts the cake. The boys were smart to choose something that could just simmer away. 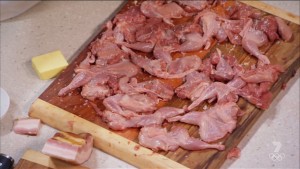 Will it be worth it?

Alex is doing a steam test of a snapper fillet (smart) while Gareth very slowly makes choux for their dessert, much to the frustration of the onlookers, who seem to regard him as an adorable doofus.
The girls are quite late getting their potato in the oven and they are freaking out over getting a main up. As Rosie says: “Ultimately, this could really change my family’s life.” Good to see them using frozen peas at least rather than wasting time shelling freshies but uh oh – Page forgot the quail. Use your timers! Have a Fuze tea and calm down.
The boys cut their fish to shorten the cooking time but they haven’t really tested the new size, plus they are adding even more chilli.
As they plate up Manu yells out: “Be generous with the soz – I love it!”
I know it’s edited to make each course look like it came down to the wire, but it genuinely looked as though the Besties just scraped in there.

Time for judging
I was going to pick the boys’ curry as my choice to taste – until they chucked chilli flakes over everything. Let’s see what the judges say.
Fass says the quail leg is great but the breast is a bit over. Pete loves the peas and Karen loves the jus. They give props for the quail deboning. “I was sold when I tried the jus,” says Manu.
On to the snapper. Guy: “I feel like I’ve just been punched in the face with this dish … in a really good way.” Liz says the fish has been respected. The other teams seem to prefer the snapper.

Dessert time
Gareth gets out the choux he made before and it’s gone crusty. Did he not cling wrap it? Ditch it, Man Bun! You can make a new choux. Choux life!
Rosie’s rosewater jelly does look pretty. Hope it doesn’t taste soapy. 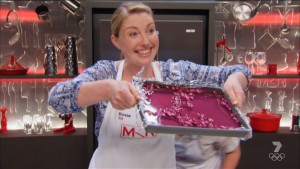 I don’t think you’re ready for this jelly … my cake is just delicious.

Paige is making pistachio praline, so of course chucks a nut at Jordan on the sidelines. (Windsong is going to be sooo happy with all the Jordan screentime tonight. I reckon he looked better with shorter hair, though.) 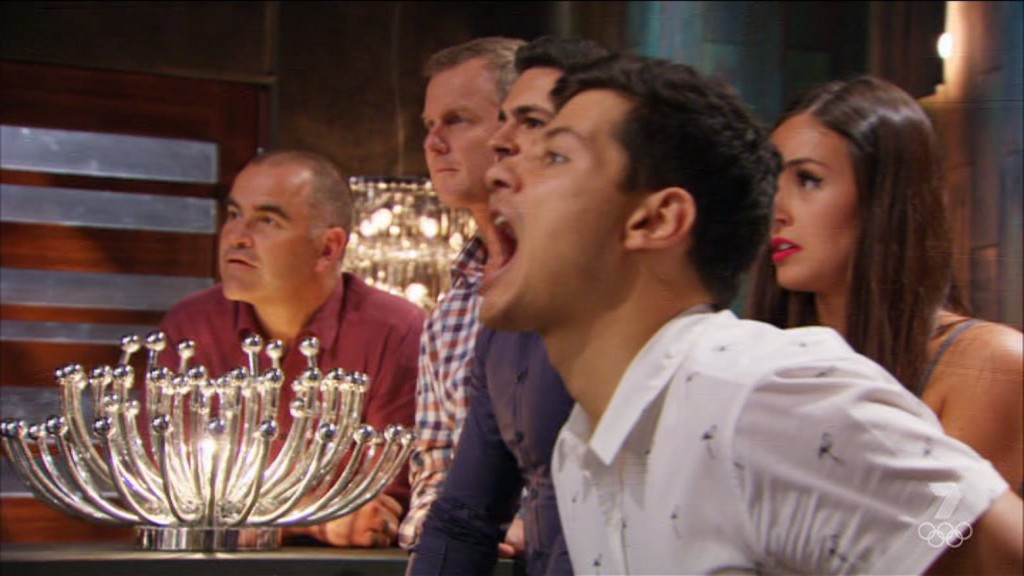 Rosie manages to make mascarpone butter and Gareth is overcrowding the teeny fryer with his dough balls. At least they’ve done a rhubarb sauce to go with them, and rhubarb is always a winner in my books.
And then Curly Laura notices something is awry. 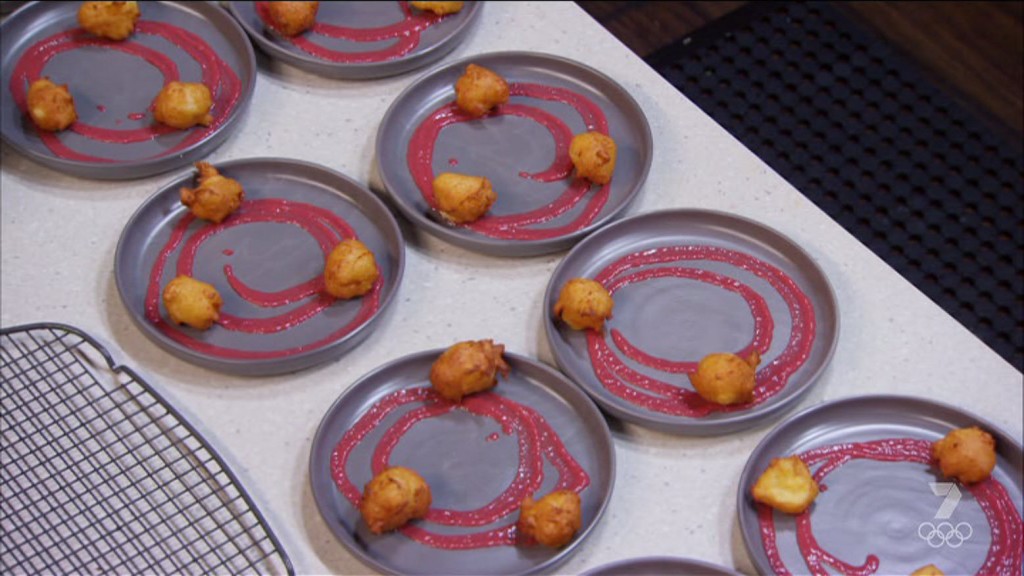 What’s wrong with this picture?

The sidelines teams must not be allowed to yell out warnings, although surely that would add to the drama. So the Miners chomp through their “tester”, not realising it’s a balls up. No worries – just give that one to Pete. But, crisis averted, the boys notice and Alex scrapes out enough from the saucepan to make another ball.
The girls’ plating isn’t amazing and they decide to ditch the Persian fairy floss, which I think gave a nice height to the plate. 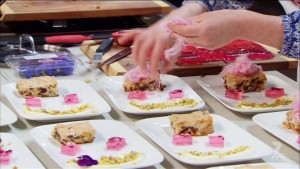 The boys’ dessert is the most visually appealing.

Dessert judging
Colin: “It’s a little bit doughy.” Karen likes the playfulness of it and the flavour combo. They love the ice cream, but the doughnuts were inconsistently cooked.
Guy loves the girls’ cake. Liz is impressed with their restrained use of rosewater in the jelly. Pete thought the cake looked boring but he loved the taste.

The scoring
Miners:
The snapper is Fass’s dish of the day. They get props for everything except the doughiness of their doughnuts and going too easy on the spice in the entree. Manu loooved that ice cream: “Pack it – sell it into shops.”
Who’d have thought after their last few shockers they’d do so well. Well done, boys.
Guy 9, Fass 7, Liz 8, Karen 8, Pete 8, Manu 9. Total: 49/60

SA Besties win and Pete utters what could be the kiss of death for them: “If I was the other teams I’d be looking at you as a real threat.” 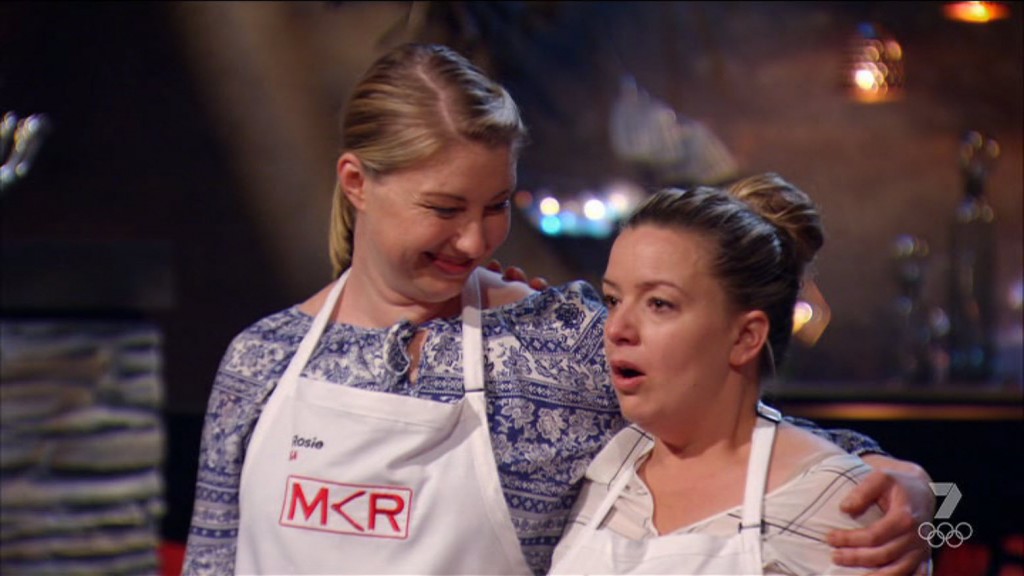 Bye-bye, Miners! You can go back to wearing collarless shirts that fit your chests and biceps properly. 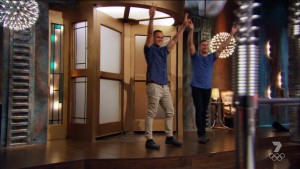 Tomorrow night’s challenge is a barbecue one and it will be fun watching Zana try not to scream if a cow goes near her. Or a bird. Or a clod of dirt. And we are teased up for a big shortcut scandal involving the Chopses. Looks like they might have used a bottle of something in their marinade. We hear Fass berate them and Mrs Chops whispering to hubby: “Why didn’t you hide it?” Oh dear – just when they had redeemed themselves after RSL Jar-gate. 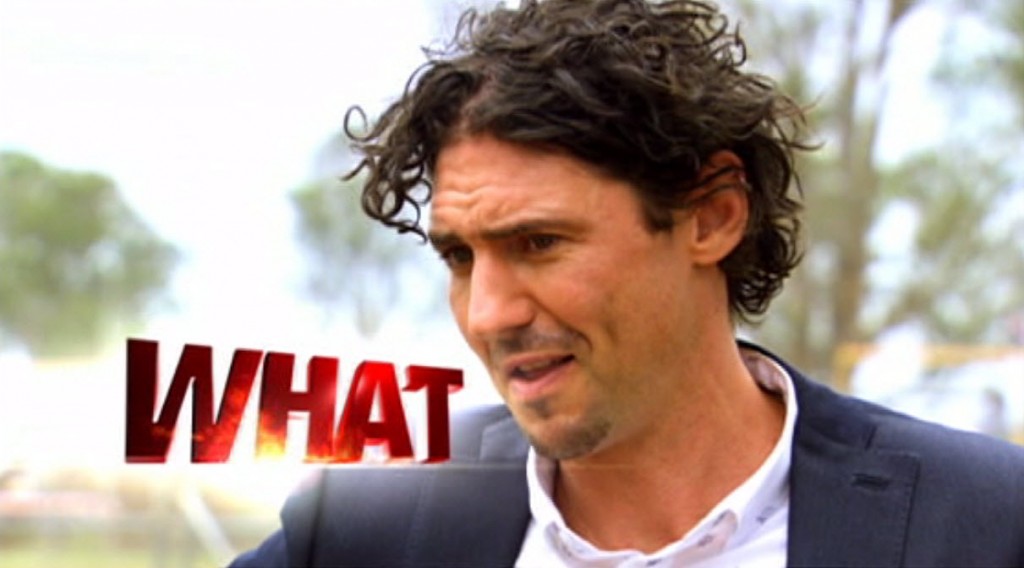 Colin “Jar Police” Fassnidge is on the case.