It’s the barbecue challenge and we know scandal is brewing for the Chopses. What do we think their shortcut ingredient is? More bottled garlic? Spice mix? Did they forget to slaughter their own cow?

And we’re at the Luddenham Rodeo for a barbecue challenge. It’s in Sydney and on a different netweork, so sadly no sign of Farmer Lance lassooing fillies.
They have to cook for the public with a marinade theme, Zana is scared of dirt (so they’ve dressed her in white), Lauren thinks Zana should get over it, yadda yadda yadda …
Pete’s big reveal: Only four of the eight teams will be safe.
And now Man Bun is out of the comp, the most interesting hairdo award goes to Mitch, aka Curly Bro. 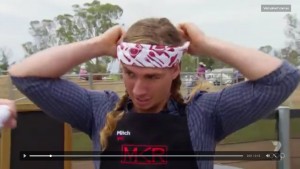 Zana and Plus One are doing Eye Fillet Kebabs with rosemary potatoes and spicy ajvar (Plus One pronounces it ay-var). It’s a capsicum relish.
Lauren and Carmine are making Jamaican jerk chicken with rice and pineapple relish and she’s holding back on the chilli. How can you do jerk chicken without heat?
Anna and Jordan are doing homemade Sicilian sausage with focaccia and tomato relish. So a snag sanger with soz. Again they are showing their technical ability, making their own snags.
Laura and Mitch are going out on a limb with bush spice kangaroo with tortillas. Curly Sis is using a tonne of native spices – looks like someone’s been reading a lot of Jock Zonfrillo recipes. Kangaroo can be tricky to cook.
Straight off their sudden death win, Rosie and Paige plan to crank out pomegranate-glazed lamb cutlets with harissa pumpkin. Lamb is always popular with a crowd but they usually don’t do well in these off-site challenges, just like Zana.
The Dads are cooking BBQ scotch fillet with smoky potato salad. Yum – sounds delish but I hope their potatoes cook through on the barbie.
Dad and Tarq are doing Argentinian spatchcock, loaded sweet potato and chimichurri (which is a fabulous sauce of fresh herbs). Wonder how the rodeo crowd will react to spatchcock?
The Chopses are another team using chicken but they are using the whole bird. It’s bourbon chicken, slaw and jalapeno poppers. And Mr Chops whips out the bottle of lemon squeeze for the marinade, so that’s what all the fuss will be about. Seriously, guys – buy a bag of lemons, chop ’em in half and squeeze ’em. You’ve already been busted once. Fass comes over to berate them and Chopses’ defence is he needed a litre of juice for his 21 chooks. Yeah, if you were at your house, Chops, but not on tellie. 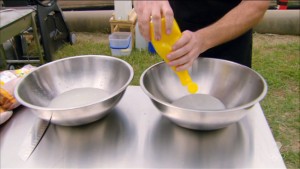 Eve is saying anything to get rid of Fass and afterwards whispers to Jason: “Why didn’t you hide it.”
Jordan is making sausages to the tune of Kid Rock’s Cowboy when Fass comes over to stir up trouble, questioning whether Anna’s focaccia will rise in time and whether they are meeting the brief of a marinade. At the next table over, Paige can’t believe Jordan is taking on Fass, but it looks the cheeky chap has got away with it. A media career beckons.
Watching Zana trying to fry potatoes on the barbie is hilarious. There’s much oww-ing and oh-ing. 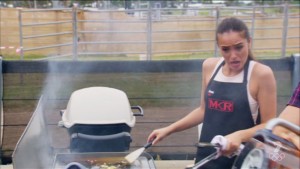 Barbecueing in a tank top is not a good move.

“I need to go and have the longest bath ever known to human beings. Put some bleach on me and detergent,” she jokes. Surely Montenegran people barbecue? They’re big meat lovers.
We cut to Lauren doing the world’s worst Southern accent in a bit to build up this supposed Zana V Lauren feud, which I’m sure Zana knows nothing about.
Both the Dads and Tarq are doing chimichurri sauce – I was going to pick Tarq as the winner until he added honey to his.
Carmine and Chops are both having trouble with uncooked chicken, while Rosie and Paige are confident in their flavours and aren’t freaking out for once. It looks like the Chopses are in the most trouble when service starts.

Time for the judges to chew …

What do you think of #MitchLaura's Bush Spiced Kangaroo with Macadamia Salad? #AussieRodeo #MKR pic.twitter.com/bONmdMO6ea

Pete looks excited to be tucking into this one. Both judges think it’s a winner.

The judges think it’s a bit bland and not all the spuds are cooked. Fass: “You don’t give an Irishman raw potatoes.”

They like the look of this chimi but say it’s oddly sweet (yes – called it!). “It’s not a great dish,” says Pete.

What did you think of #CarmineLauren's Jamaican Jerk Chicken with Rice and Relish? #AussieRodeo #MKR pic.twitter.com/aH8c2tRwOj

The judges appreciate all the work that went into this.

Chopses finally get some food out but say the chicken has no marinade flavour. The slaw is limp; the poppers are the best bit.

All we hear from the judges is Fass’s “good, hey?”, so they’ve probably won.
To the strains of Black Keys’ Lonely Boy we get the last rush of food pushing, and Chopses still have dishes sitting on their table.

The judges’ verdict
Pete gives Anna and Jordan mad props again for their teamwork, a combination of her experience and his youthful twists. Curly Sis is chuffed to hear Fass say: “It takes balls to do that.” And that is why we love him on MKR. His pairing with Pete seems a more comfy one than the Pete-Manu screen presence. The Dads won the chimi-off. The lamb was Fass’s dish of the day and Pete says it was exceptional. Good to see the girls happy again.

I’m thinking the breakdown will be:
Top
Curlies
Anna and Jordan
Paige and Rosie
Zana and Gianni