We’re at Sydney Olympic Stadium and finally we get to see cooking from Zana and Plus One, Dads/Mates and the Italians. They have to cook for 200 future Olympians, Paralympians and trainers, so the food has to be tasty and nutritious.
As Jordan, looking foxy in this shirt … 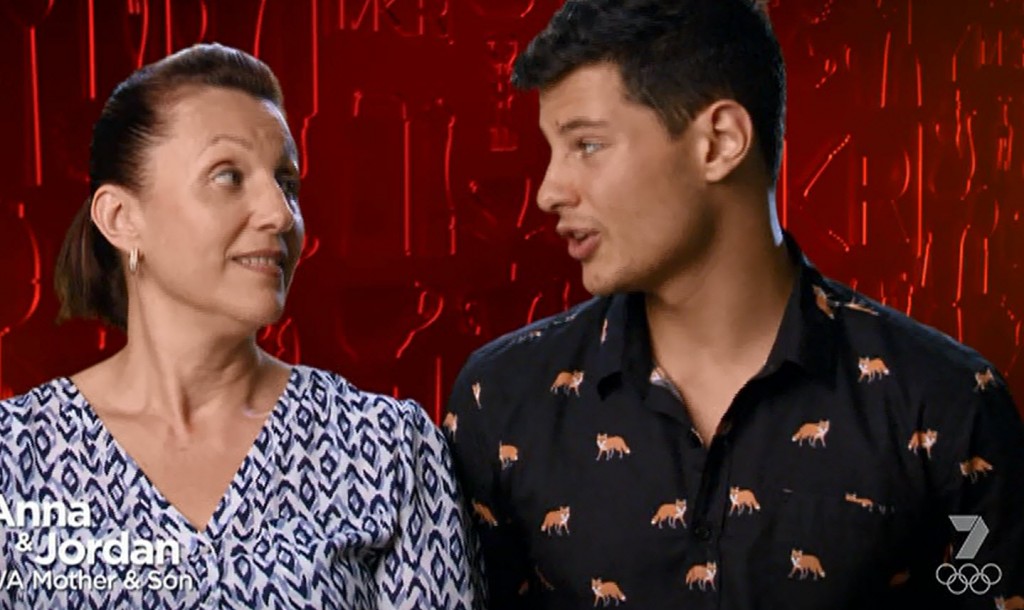 Foxy Jordan, just for you, Windsong.

… says, the Dads have an advantage here as one is a nutritionist.
The “ather-leets”, as Colin calls them, vote for their fave, who will be safe from the next two eliminations. Pete and Colin will choose the two weakest teams, who will enter a sudden death cook-off, as per last night’s Duck Nutters V Lauren and Carmine. (Where’s Manu? Filming new Campbell’s stock ads? It’s been the Colin and Pete show the last two nights.)
It looks like a hot day but luckily they provide the contestants with hats, so there should be no Survivor-style near death experiences (well, until the atherleets eat the food).

And they are off! Who will deliver the winning 'delicious and nutritious' dish today? #RioChallenge #MKR pic.twitter.com/fC4wHNgGen

Zana, the germaphobe is not keen on cooking outside because there could be “dust and bacteria flying everywhere”. I don’t think she went camping as a kid. They base their dish on a good protein choice, chicken livers, but given the athletes are all quite young the offal is a worrying choice. Their dish is “Loaded capsicum” with chicken livers and sweet potato chips”. But they are not actually writing the word “liver” on their menu board. Hope no vegetarians take a bite.
Jordan and Anna are doing Sweet potato and buckwheat gnocchi with kale pesto. I’ve never seen buckwheat gnocchi but kale is such an overrated “superfood” and it’s icky. Pete should love this one.
Oh no – both Italians are wearing hats, so I can’t tell which one is Hat and which one is Sans Hat. They are making veal involtini with spinach and polenta sticks. Yum!
The Lovebirds are doing chilli beef on sweet potato with a power salad.
Lauren and Carmine are gym-going types so should know what athletes like. They are doing herb chicken with roast veg quinoa. As Lauren says, they have cooked more than most of the teams there so are used to performing under pressure.
Pete hasn’t even seen the Dads/Mates cook before. They are making Mexican chicken tortilla cups.
The Sisters are bickering and hats off to the editors for playing the Muppet Show theme. 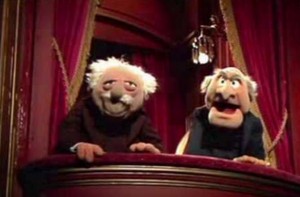 Anyone else know their names are Statler and Waldorf? I didn’t until just now.

They are making quinoa-crusted chicken with grain salad and coriander dressing. Hope there’s a decent whack of veg in there. They plan it to be a healthy version of a schnitty.
Tarq and Dog, er, Dad are making spiced prawns with peshwari curry and wholemeal roti.
As they cook some athletes train in the background, and the camera only cuts to jiggling hurdler Michelle Jenneke once every segment.
Paige and Rosie are doing dukkah-crusted lamb with pistachio and quinoa salad. They are keen to redeem themselves after the RSL duck with watermelon salad.
Colin comes over to check Mr and Mrs Chops aren’t using jars. They are doing pork fillet with pearl couscous and harissa. Can’t say I’d cook pork for a Pork Ambassador when I was already on his hit list.
Everyone’s getting hot and flustered and the pressure is getting to poor Rosie – luckily Paige has her back and Colin gives her a pep talk.

The gold medal should go to you @Fassnidge73 🏅 and Paige's hug! 🏅 #RioChallenge #MKR pic.twitter.com/CgWKZzj3dS

The Miners are making fish tacos with corn salsa and guacamole. Sounds tasty, simple and good summer food – please don’t stuff it up, boys! The are using a pasta machine to roll their taco dough – hope it’s not too thin.
With 15 minutes to go some teams are in a better place than others. It’s so hot it looks like Zana’s false eyelashes are sticking to her eyebrows. The judges like the sound of Anna and Jordan’s buckwheat gnocchi but not so much Lauren and Carmine’s chicken quinoa.
JP and Nelly are worried their sweet potatoes aren’t cooked. Which is because they chucked them in the oven whole, instead of chopping them in half and wrapping in foil to conduct more heat.

It’s service time and Zana and Plus One have nothing to serve.
Gareth (Man Bun Miner) gets the Duck Nutters Memorial Juss Award from pronouncing tortilla as “tor-till-a”. At least non-Man Bun knows how to say it. The judges like the look of their dish. “That’s a good dish,” says Colin. “I’d pay for that.” I can’t wait to see the lads’ faces when they finally get a good critique.

Tasia and Gracia’s chicken gets the thumbs up for its delicious herby sauce.

Lauren and Carmine’s chicken is “a bit burnt” says Pete and the pumpkin is still raw. can you imagine Lauren’s reaction if she is sent back to sudden death? She’ll have Carmine fitting the judges with concrete boots.

JP and Nelly’s chilli beef with power salad is a bit heavy for the weather. Pete just likes the salad.

What do you think of #JPNelly's Chilli Beef on Sweet Potato and Power Salad? #RioChallenge #MKR pic.twitter.com/8XD3ZN2LMO

The lamb and quinoa by Rosie and Paige is ok but could be better.

Chris and Cookie’s tortilla cups get respect but could do with more seasoning, says Colin. Pete reckons the athletes will lap it up.

With 15 minutes left of service Zana and Plus One still haven’t plated up a dish. Their sweet potato chips just aren’t cooking. Forget the chips and serve the capsicum at least! Zana is only happy with the livers and bursts into tears. A lovely athlete comes over to give her a buck up.
Mr and Mrs Chops serve tender pork but it’s a bit bland, although Colin says “it’s a good dish”. Redemption for the Chopses!

Finally, the judges taste Zana’s food and Pete says the chips look “sad”. The capsicum isn’t cooked and one poor girl breaks her cutlery trying to saw through it.

The Italians are putting on a show for their waiting customers, singing That’s Amore. “It’s not singing to me at the moment,” says Colin. They think it looks drab and the veal is dry.

Tarq and Dad have done a lot of work to get those elements done, they didn’t back off on the spice and Pete says it’s “rockin'”.

So, are we thinking bottom two Lauren and Zana?
Time for the judges’ critiques and it’s more of what we saw earlier, except Colin ask the Sisters for their coriander sauce recipe – high praise indeed. It was nice to see the Chopses’ relief and Jordan’s reaction to Pete’s praise. The Miners must think they are dreaming when Pete says “nothing to fault”. Good on them.
The team that’s the atherleets’ choice is Anna and Jordan. Yay! That was a tricky dish to pull off.
Sudden death teams are Zana and Plus One and Luciano and Martino. Oh, how the mighty have fallen! This is the point in the competition where those who do well under pressure thrive, even if they are not the best cooks.