Ok, time to see Paige and Rosie’s beautiful friendship and witty one liners (and, hopefully, yummy food) overshadowed by the drama of Feisty Cop and Villain Lauren. Can we just hurry up and get to the part of MKR where teams get to cook for the public?
The SA Besties start the day determined to be top of the leaderboard, so the music editor throws in a late 80s classic: New Kids on the Block’s You Got It (The Right Stuff).

And the music just gets better with Roxette’s Dressed for Success (and yes, I had the cassette of the album: Look Sharp!).

The judges are doing their preview bit and Pete is delighted to see a menu that flows, after the Miners’ trip around the world last episode.
Entree: Spiced lamb filo rolls with yoghurt sauce
Main: Chicken shawarma with hummus and flatbread
Dessert: Orange and almond syrup cake
It all sounds delicious but I’m wondering if they will make their own filo? They did it once on Great British Bake Off and it is labour intensive and required a tonne of bench space for the stretching.
They whip through Coles and after a visit to a crazy-haired butcher for chicken thighs, they are home. 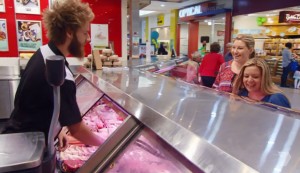 Take a butchers at his hair.

And again they are running late, getting back to the house once the clock has started ticking. Geez, you make it hard for yourselves, girls. Luckily their setting up does not involve any broken signage this time so they are in the kitchen as the clock ticks 2:40.
Paige says their mantra is: “No stress, be calm, got each other’s backs.” As head chef Rosie tasks her with creating the dukkah for the entree.
Rosie gets on to the dessert and gets a double yolker for luck. Hopefully this means their ice cream won’t be glop this time.

And here come the guests to – of course – T Swift’s Bad Blood and Lauren and Carmine are leading the pack. (If any SVU fans have not seen the Bad Blood clip, check it out for a cameo by Olivia Benson )
However, there’s been a wardrobe malfunction: The Stepsies are not dressed alike. Was there a last-minute change after one of Lisa’s eyebrows melted off her face and stained her planned outfit? 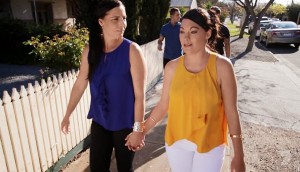 “Where’s my Daughtie? Look at moi, stranger in non-matching clothing.”

In the dining room Rosie and Paige give their happy families spiel and Ducks Nutters and the Miners are pleased to be there, but the other three teams hate each other (well, that’s what it’s edited to look like and Hazel’s too upbeat to join in), so conversation is awkward and the Miners (who were stuck in the kitchen last time) don’t know what’s going on.
Feisty Cop is happy to fill them in because she likes to kick the hornet’s nest, and hornet Lauren is still defensive. Ad then they start arguing over whether or not Lauren is raising her voice. Lauren to Feisty: “You can’t throw that in my face because you did it the other night and you’re doing it again now.”
Then she tells the confessional: “Thanks, Monique, thanks for firing me up .. I can’t wait til you come to our instant restaurant because we are aiming for the top of the leaderboard and we are going to smash it out. How do you like them apples.”
Umm, she can’t wait because she is going to poison Monique with uncooked seafood? What does she think will happen? She will force Monique to give her a high score by the sheer brilliance of her cooking?

In the kitchen Paige is cooking some delicious-looking spicy lamb mince and – oh, sorry – it’s back to the drama, which probably lasted all of two minutes in real life but has now been going on for donkeys years because Channel 7 promoted the heck out of it.
Monique: Stop pointing your finger. Lauren: Don’t tell me what to do, Monique.
I’m waiting for Monique to say: “If you can’t be nice, young lady, go to your room.”
Here come the judges so we’ll finally get some peace and quiet. And, perhaps, some cooking. It does worry me the Besties are still cooking the filling for their filos, as it will have to cool before they can bake the pastries.
The guests peruse the menus and are surprised to see the Middle Eastern flavours.

In the kitchen Rosie makes her marinade for the chicken (wouldn’t that have been good to do earlier?) and she mixes up the paprika with cayenne pepper and the taste blows their heads off. Luckily before she chucks it out Paige tells her to do the bleeding obvious and add yoghurt to mute the spiciness.

Monique wants them to have minced their own lamb and made their own yoghurt. Given the latter takes at least four hours, it’s not really doable in the MKR timeframe. And, yes, they could have minced their own lamb but then we wouldn’t have got the footage of the Coles butcher who just happened to have a trolley of mince when they needed it.
The girls are determined not to freak out and stuff up like they did last time. They plate up their filos with a nice tumble of dressed rocket and it looks a bit underwhelming, but could well be delicious.

Cue the chew … Pete: “You’ve entered the competotion with this dish because you were cooking with love. The lamb filo roll was to die for.” And Paige bursts into tears – a common reaction for people speaking with Pete.
Manu’s turn: “It was good.” Manu, you are terrible at these fakeouts.. “It was great.” Manu loved it but wished they had a few more buttery layers of pastry.
Hooray – finally some good news for the Besties and in the kitchen they do a happy dance and hug it out.
At the table everyone loves it – Man Bun is in heaven – even those who were hoping for a disaster to save their own skins. In the confessional, Feisty says: “It’s like a bittersweet mouthful.” At least they aren’t doing the talking it down thing.

The Besties start prepping the elements of their chicken shawarma and at the table – and in the editing – there is much innuendo involving the word shawarma. To illustrate its supposed filthiness we get Ginuwine’s Pony (which IS filthy), which inspired a lot of grinding action in mid-90s nightclubs.

None of the guests is sure what shawarma is. Kell cuts to the chase: “I think it’s a fancy way of saying a kebab.”
But we’re in SA at the moment, so let’s call it a yiros, please.

In the kitchen Paige is blithely blitzing hummus while Rosie cuts chicken, pan-fries chicken and pan-fries pita bread, all while trying not to give anyone salmonella. And she burns it all. Making hummus is a dead-easy two-minute job. Why doesn’t one of them cut all the chicken while the other cooks it, then one person can fry the bread why the other makes hummus? Simple.
Rosie is starting to freak out, just when things were going so well. Go stick your head in the freezer and take some deep breaths, Rosie. Instead, Paige makes her dance it out (she’s been watching too much Grey’s Anatomy) and wisely takes the helm of Rosie’s gorgeous six-burner stove. Rosie gets it together and they plate up on round chopping boards, which is exactly what my local Middle Easter cafe does. They’re not happy with the bread but decide to serve it anyway. They are worried about the spiciness of the kitchen but with yoghurt, hummus and salad as sides it should be fine.

Main with lots of love is served! #RedemptionRound #MKR pic.twitter.com/15mykKUetS

Chew o’clock …
BUT WAIT – WHAT’S THIS. It’s an MKR ad about the twist. “None of you are seff,” intones Manu and we cut to a picture of Ducks Nuts, Cops and Lauren and Carmine. Guess we have to wait til Sunday to find out.
Back to the chew … And Manu gets to speak first for a change. But then Rosie starts talking the dish down, while Paige wishes she could gag her. Manu: “I think this is an amazing dish. The flavors are just dancing, jumping.” He agrees the bread was rolled too thinly. Pete says it’s one of the best chook dishes he’s had in the comp. And there are more tears from Rosie. Yay. They are on track to beat Nev and Kell and their uncooked marron.
Again, Man Bun is loving it. The Cops are less thrilled, saying there was not much skill involved. Serious;y, girls, if the judges praise a dish, you look like tools when you bag it out. And then we get a Pot-Kettle moment from Lauren: “Be a good sport about it.”
Hazel was loving it but then she gets a piece of raw chicken. Not good – why couldn’t the Cops get that bit.
In the kitchen the girls are testing their massive orange cake – two smaller cakes would have been easier. And then Rosie realises she forgot to add the almonds to the icecream, so they have to stir them by hand, which will delay the freezing further. The cake is looking great but the icecream has an inconsistent texture. They want to ditch it and Rosie offers to whip some cream, but Paige wants it served plain. You need something “wet” on there – are you out of yoghurt? Make a quick almond praline to jazz it up.
Instead they scoop out smaller quenelles of the successful scoops and for some reason plop them on the plate next to the hot cake. Why not clean off their icecream serving dishes and put them back on there, even if they did look small? Better than molten lava on the plate.

Dessert is served! How is it looking? #RedemptionRound #MKR pic.twitter.com/VgjnZlq2pZ

Luckily the cake looks divine.
Time to chews … “It works,” says Pete. “It’s moist, it’s full of flavour.” He would like more syrup. Manu stresses it’s a simple dessert and the ice cream’s texture is wrong, but the cake is right.
Most of the table likes it, but, the Cops find their orange cake too orangey. Man Bun miner is frustrated by the comments, yet polite: “I understand this is a redemption round and I think a lot of people are trying to hunt for something negative to say.”
He’s a nice boy.
The girls are definitely the best cooks of the round thus far but the teams are obviously suss about the looming twist and some are scoring to save themselves. Credit to the Cops and Lauren for not lowballing as hard as Nev and Kell.

The girls are stoked – go South Australia!
And we get another twist promo for Sunday, with Manu proclaiming: “Hole is not what it sims. None of you are seff.”
What, do they have to do some instant cook-off to add to their score?

And now we have a break to catch our breath and prepare ourselves to watch Lauren cook on Sunday. And to see Lisa attack poor Man Bun.