Surely Tarq and Dad have got this in the bag, despite the promo trying to make us think they’re having (another) shocker. Make sure you vote in our new Logies poll.

Tarq and Dad are making:

Entree: Thai prawn bisque with prawn toast
Main: Sesame-crusted tuna with homemade soba noodles
Dessert: Indian rice pudding with stone fruit compote
They are skipping all over Asia there but it sounds delish – is dessert too simple, perhaps?

Chopses (Eve and Jason) are doing:

Mr Chops is getting on with the sorbet and continues his history of bad things happening when he touches lemon juice. This time it’s a real lemon, rather than a squeezy bottle, and he adds it to the dairy too early and creates instant curds. Down the sink it goes and it’s time to start again.

Over at the other kitchen, Tarq and Dad are prepping like mad and both manage to cut themselves. It’s blue bandaids galore. They are back on track quickly and speeding through a lot of work (who else wanted prawn toast when they saw Dad prepping that), while Chopses are on cruise control. They know their entree is simple but it will be “perfect”. Chops is not very good at chopping cauliflower – he looks slow as a wet week.  Ooh – maybe the shock from the promo is that they don’t get a dish up?

Finally Eve gets on to cooking the scallops and dons a yellow glove on one hand to handle them, then proceed to touch them with her ungloved hand. But it’s taking ages, so Chops goes over to help and notes some appear to be raw in the middle.

It’s plating up time and Dad is feeling the burn – he’s sweating bullets into the prawn bisque. Doesn’t Manu have a velvet jacket lying around he can use to wipe his brow? 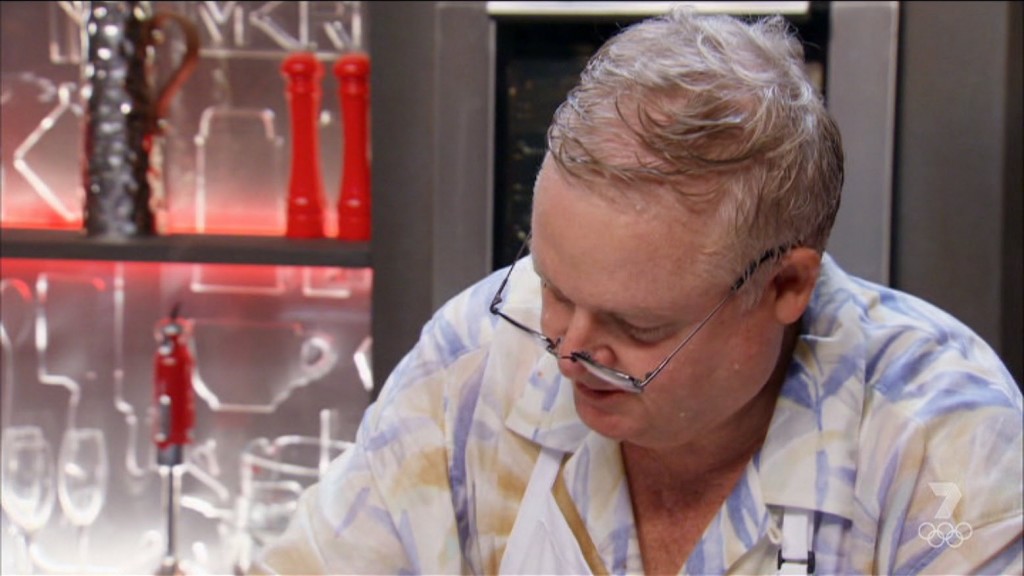 Both dishes look good but the prawn bisque is the one I want a big bowl of. What a relief to see them in control after the schemozzle of last night.

Time to chew …
Guy likes the way the scallops are cooked. Karen thinks the dressing needs more acid. Pete says they should have bammed up the miso.
Liz likes the toast and bisque’s depth of flavour and Guy agrees it’s a great teaser for the rest of the night. Fass thinks they could have added flavour with lime leaf or Vietnamese mint.

Dad Mike gets on to the soba noodle dough while Tarq crusts the huge slab of tuna. Chopses’ curry is coming along but I don’t understand why they didn’t start it in a pressure cooker and then reduce the sauce later on the stove. Mr Chops makes a ginger cake for dessert and is only just prepping pears for poaching. Pears always take ages, but it will help that he’s halved them. The onlookers are impressed with Dad’s soba noodle-making technique, and noodle expert Jordan is called upon to let us know Dad’s doing a good job. 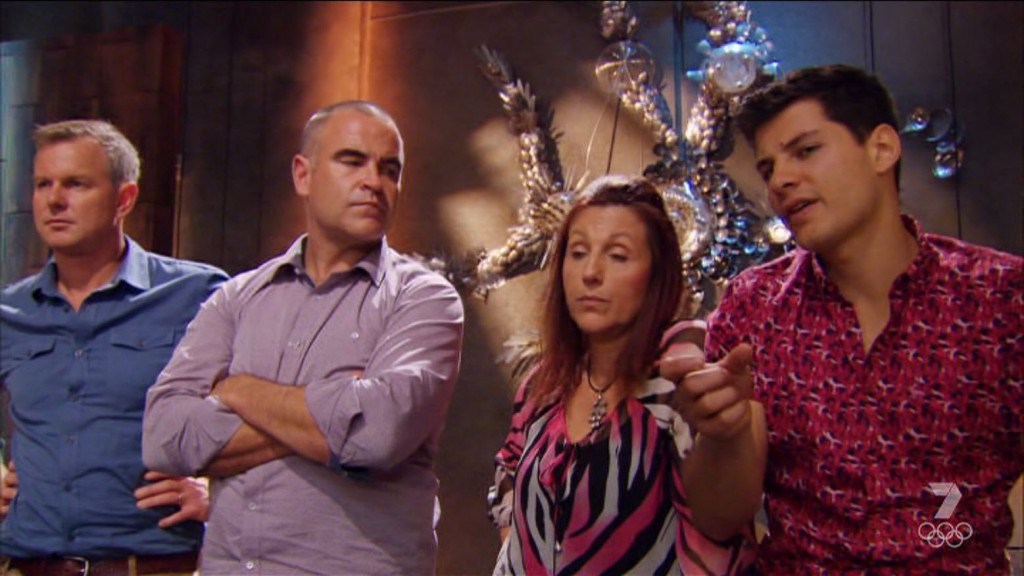 I’d happily eat that daal but it’s looking quite mushy. As Anna comments, Tarq’s rice pudding is strange as they’ve precooked the rice. The wheels are starting to come off a little – they put the slab of tuna in a pan that’s too small, and in taking it out lose some of their sesame crust. They sort themselves out but Lauren and Carmine are worried they are serving the tuna as one big slice, rather than pretty cubes, as is usual. Chopses are rushing to fill their many bowls of condiments and sides. All credit to them for their support of each other and their apparent joy at what they produced.
Time to chew …

Liz loves the tuna slab and Fass again disagrees, saying the raw to seared ratio is out of whack: “I think it’s a good dish but it’s a clumsy dish.” Fass think the curry is braised well but he and Guy say the daal is too mushy. Karen, however, likes the texture and Manu is Team Karen.

Dessert time …
Chops is making some butterscotch sauce and Curly Sis is worried the dessert will be super sweet. At least they have yoghurt sorbet to balance it. I don’t know why he went to the effort of poaching the pears in spiced liquor if he was going to chuck them in the sweet sauce anyway. Tarq’s rice puddings are looking awful – so awful they make giant turd quenelles from it. Have they never eaten a rice pudding before? They’ve certainly stepped off the gas for dessert. And then we finally get the “shock” moment, when this happens: 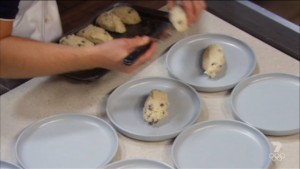 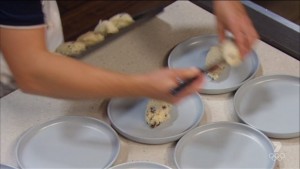 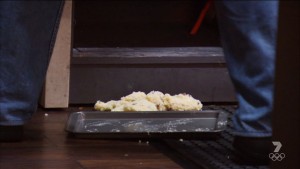 They’ve lost five of their 12 pudding quenelles, but this could be a blessing in disguise as now they’ll have to use less of the stodgy-looking rice. Oh no – here’s the real disaster – they have leftover pudding and just quenelle some more.
Chopses are plating up their slabs of cake and feel sudden death has brought out the best in them – who’d have thunk it. 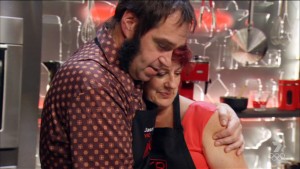 Are those chops growing before our eyes?

The charcoal plates were a good choice to make their brown elements look classier.

Guy thinks Chopses’ dessert is not too sweet but Manu and the others disagree. The judges think the cake is dry and Fass says the butterscotch needed more butter. The judges taste the rice pudding and …. urgh … we don’t get to hear the comments. They must be baaaad! Dad and Tarq are on the chopping block.

The Chopses’ laidback attitude served them well in sudden death and they didn’t overcomplicate matters. I don’t think they’re in it for the long haul but they deserved the win tonight.