Connoisseur Cafe Grande Ice Cream? Check. Master 4 in bed after getting up at frigging 4.30am? Check. Mr Juz in another room watching old West Wings? Check. Ok, let’s do this, MKR.

Four teams are in Sudden Death tonight: the Dads, Tarq and Dad, Lauren and Carmine and Easy Peasy Lemon Squeezy aka Chopses. You’d have to think it will be the Chopses going, with Lauren no doubt saved by the skin of her teeth thanks to the number of times they’ve been in the bottom and have cooked under pressure.
Oh, but hang on, here we have Pete and Manu (Manu in a plum velvet jacket with black satin lapels this time) saying that, just kidding, it’s not sudden death after all. MKR loves a fakeout. Instead, the two suckiest teams from tonight will go to sudden death tomorrow night (Mon) and only then will a team go home. Geez, they are stretching this season out longer than Zana’s eyelashes.
And there’s another shakeup: two teams will cook mains and two dessert. Pete and Manu pick one loser and some new critics will pick the other. OMG – it’s the past contestants! What a shock … Lauren seems particularly excited. 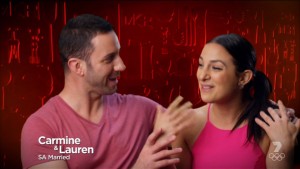 “This is the best day of my life,” she says. Carmine can’t decide whether she is taking the mickey.

And the so-called Hall of Famers are: Will and Steve (nice British lads who won last year), Cowboy Robert and Lynzey, Ash and Camilla (and how cute is it to see Mama Anna so thrilled to see them and what sounds like Jordan exclaiming “my favourite”), Catty Sophia (FYI her partner’s name was Ashlee and I swear I hear Jordan say “love her”), “Princess” Jen (who won in 2012 and now has her own line of curry pastes), Chloe and Kelly (this was filmed before they got sacked from their WA restaurant review gig – and Zana says: “Good luck cooking for them – you think I’m bad!”), twins Helena and Vicky, Carly and Tresne (holding hands this time round – yay), original Curlies Angela and Melina (Ash’s do still has them beat), SA’s Nic and Rocco and Dan and Steph. 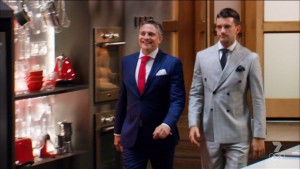 Will got the pick of the suits this year – Steve’s not the pretty one, for once. 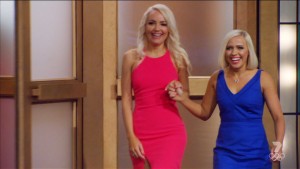 Carly has been hitting the gym hard. 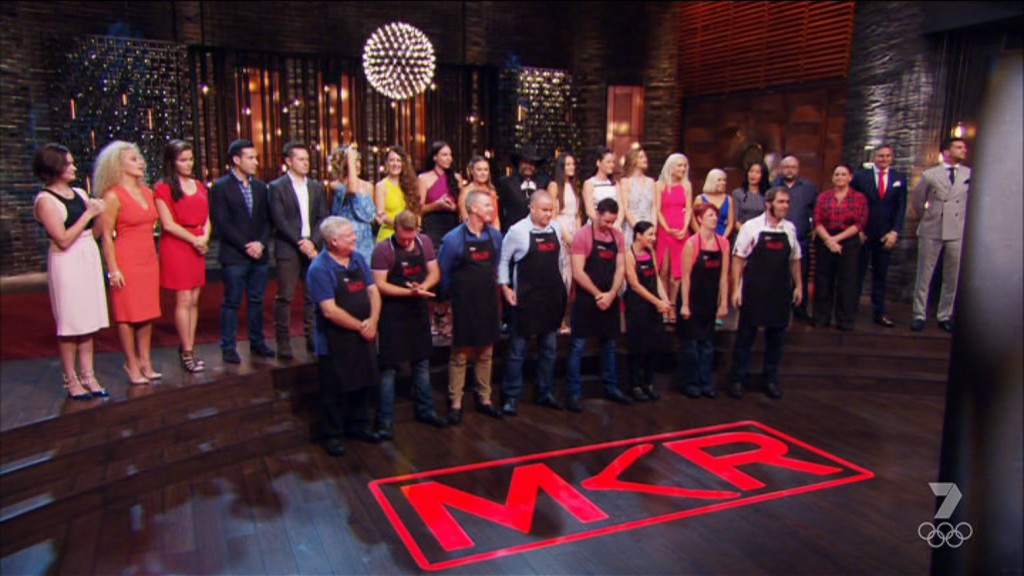 How can they possibly have a Hall of Fame without the Captain and the gay villain dude?

We get to see Dan and Steph’s baby, conceived via IVF paid for with the money they won from MKR. 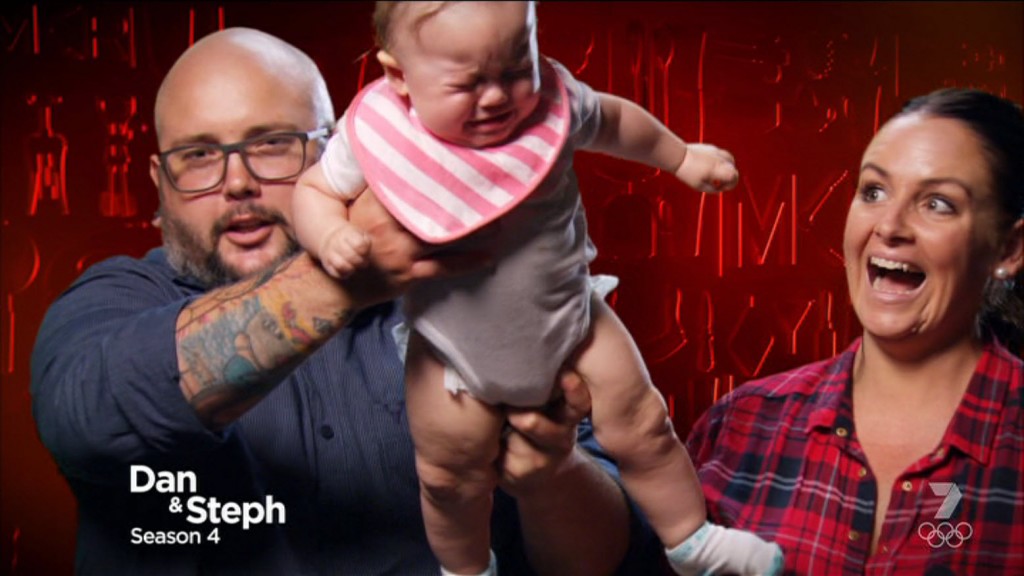 Has Chops been feeding the baby Lemon Squeeze?

Time to choose who cooks what. Dessert is Chops and Dads, Main Lauren and Carmine and Tarq and Dad. So Tarq and Dad are safe. Just do a fab seafood curry, guys. Mrs Chops did a good stout and chocolate pudding in her instant restaurant, while the Dads did a choc mousse with a number of elements.
The mains people cook first and we see them run into the pantry ala MasterChef for their ingredients. But unlike MasterChef, they would have planned their dishes in advance.
Lauren is making quail with mushroom and thyme broth. So we have to sit through an hour of Carmine deboning quail, just like Paige the other day? They did do well with their seafood broth at their redemption kitchen cook – remember Manu asking for a doggy bag? Carmine already looks knackered and Lauren sounds like she’s had 10 short blacks.
Tarq and Dad are making pan-seared duck breast with Thai curry sauce and pineapple fried rice. What the heck is Thai curry sauce? Can’t we get a proper name for it? Let’s see what Thai cooking specialist Jen thinks of this one. The guys know their curries, so no doubt it will be good. And it’s been a while since we’ve seen a decent rice so let’s hope it works.
Dad adds a tonne of tamarind paste to the soz (why aren’t they using dried pulp – Fass would not approve) so they then have to rebalance the soz.
On the sidelines, Sophie is perplexed about the pineapple and red onion rice: “Rice is rice; why are you trying to pimp up rice?”
Lauren has made her stock in the pressure cooker (no Campbell’s tonight) and uses her bare hands on the boiling muslin to wring out the liquid. Ouch! Use a saucepan or something to press it down, silly girl.
Carmine is finally on to the quail and has to cook 40 breasts and 40 legs, which is tricky given they have different cooking times. The other team seems to have cooked 16 duck breasts – well, not cooked, per se, as they are too pink in the middle. This is the first time we’ve seen pressure getting to Tarq, whereas Lauren seems energised by it and having the Hall of Famers there.
It’s time to plate and Tarq is chucking the rice on with his bare hands. Why not just serve it in a bowl? Carmine is worried some of his quail is browner than others.

Time to chew …
The returnees like the depth of flavour of Lauren’s broth but some of the quail breast was dry. On to the curry and Ash is alarmed: “Is that raw?” Jen thinks the curry is very limey and even Carly is struggling to find something nice to say: “Our rice was pretty crunchy and the duck was blue and the sauce wasn’t very nice.” Sophia thinks the sauce wasn’t “that bad” but the duck “was probably once of the worst things I’ve put in my mouth … like a rat had died in a shoe”. Ash gives a great reaction shot: 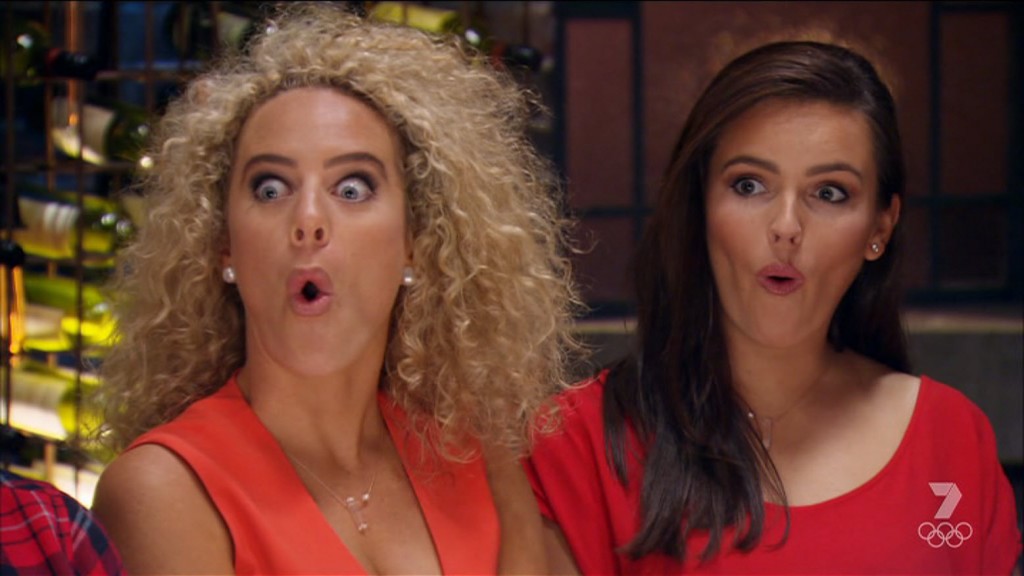 So, Dad and Tarq cracked under the pressure and they’re a cert for sudden death. I’m 0/1 at this point.

On to dessert …
Dads Cookie and Chris are doing a dessert taco. Smart not to give more info, in case you stuff up an element and can’t serve it. They’re pulling a Heston and doing sweet food that looks savoury, with strawberry soz for tomato soz, a taco tuile and chocolate soil “mince.” Risky.
The Chopses are doing crepes with pickled orange and candied walnuts. Sounds far simpler but someone will have to teach them how to squeeze and juice citrus. Actually, Mr Chops is doing a nice job of the orange segmenting, but he’s nervous: “I’d be quicker if I wasn’t shaking so much.” Mrs Chops aka Eve knows it’s simple, so it has to be perfect.
Manu and Pete are intrigued by the dessert taco. Manu: “I think it’s a dish with a lot of humour in it.” Pete: “Let’s hope it doesn’t taste funny.” Cookie reminds us they have never cooked for Manu before. Then he adds green food colouring to choux paste to create the “lettuce” component of their taco. Surprised they didn’t use pandan.
Eve has a whole lotta crepes to cook and Ash and Camilla, who cooked a lot of French-style food in their season, worry they are cooking crepes for Manu.
The Dads make their chocolate soil out of what looks like a dry cake mix with chocolate, pecans and chilli. Carly and Tresne pop in to their kitchen space (totally unprompted of course, to do one of their “circle of empowerment things”, which involves chucking a bit of flour at them). The Dads tolerate this “lucky” spell, which immediately backfires on them when this happens: 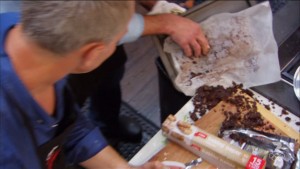 Yep, Cookie drops the hot tray and crumbs go everywhere, but most land on the bench. Just scrape it up, boys. And they do.
Does glammed-up Tresne stand by her actions? “The circle of empowerment … to be fair we didn’t really win the competition,” she laughs.
Over on the other side the Chopses have gone a bit loopy and facial hair lover Eve is looking forward to touching Cowboy Robert’s mo later on. The onlookers think they are too chilled.
The Dads are rushing back and forth from the oven, draping delicate tuiles over rolling pins to form the taco shape. It’s going to be hard to fill them without breaking them. This could be a lot of work for something that doesn’t taste great. The green choux puffs come out of the oven and the SA Besties and Zana aren’t sure about them, with Zana implying they look llike ogre poos: “They look like they came out of Shrek.” 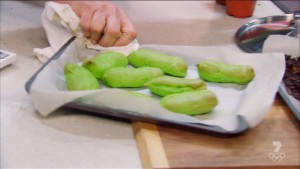 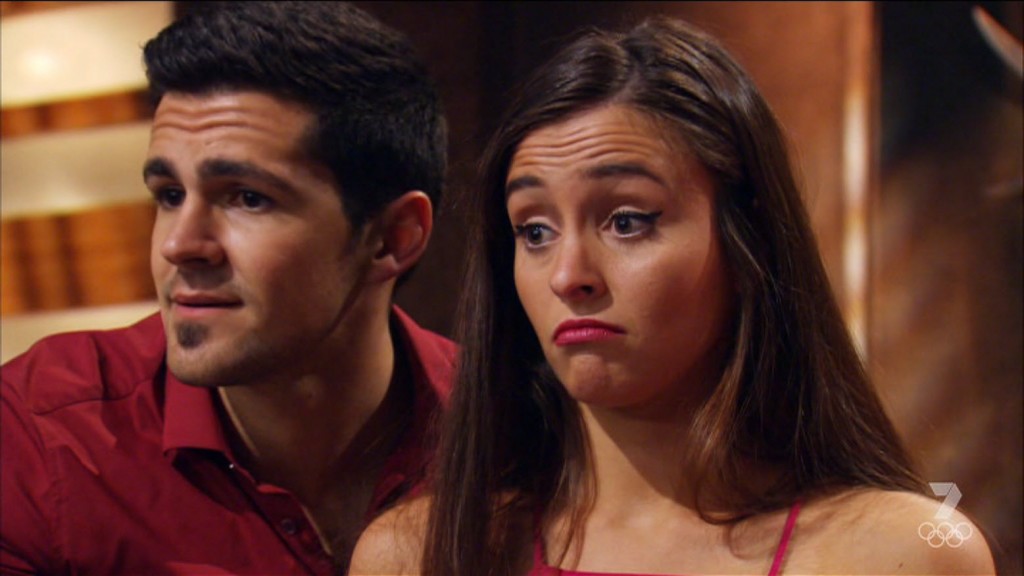 Nice to see someone in the comp who can still furrow her brow. Remember Lisa of the botoxed forehead?

The Chopses are plating up and it looks nice – but will the judges like the pickled oranges? Dads have made the mistake of not chilling their strawberry “salsa” and the hot liquid is making the tuiles unfurl. At least the grated white chocolate resembles cheese. It’s the sort of dish you would order off a menu just to see what it’s like.
Time to chew …
Everyone digs in to the taco. Ash: “The taco is rando. It’s just the most bizarre thing. I really credit the boys for their creativity, but it’s too much to take in.” The Hall of Famers think the Dads did a heap of work and showed technique, but it wasn’t a cohesive dish. And the Shrek poo lettuce was weird.
And then it’s crepe time. Rocco: “Crepes are a bit rubbery.” The sourness of the pickled orange surprises some: 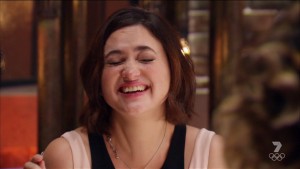 Jen’s face when she realised she would be paired with Sophia for the confessionals.

Will thinks it’s too simple, Camilla thinks the crepes were too dense. Cowboy Robert sums it up: “Well, maybe they haven’t done enough here, whereas the other guys have done too much.”
Sophia thinks the Chops’s friends need to be more straight up with their critique of their cooking: “I would love to never ever see it again.” Am I right in thinking none of Chloe and Kelly’s comments at the dinner table made the edit? Some last-minute reshuffling there.

The teams learn their fate
I think it will be the curry versus the crepes.
Mike and Tarq: Poor Tarq is gutted by the comments about the undercooked duck and the acidity of the sauce.
Lauren and Carmine: Manu says deboning quail before you cook is a waste of time – just cook it and then chop it up. The SA couple is stoked to hear the feedback on the broth.
Eve and Jason: Pete says the idea of pickling the oranges was interesting but they played it safe and fell short.
Chris and Cookie: “I’ve seen a lot on My Kitchen Rules but I’ve never seen anything like that … I love to see people pushing the boundaries,” Pete says. “I think you’ve just tried to hard,” says Manu. “It looked cool – for kids.”
The returnees pick Mike and Tarq for sudden death and the judges dob in the Chopses. Mike and Tarq should have this in the bag if they can keep a cool head.

The preview for tomorrow night gives us no idea what they are cooking, but we know Mike and Tarq each cut themselves and something else bad happens, because we get these reaction shots: 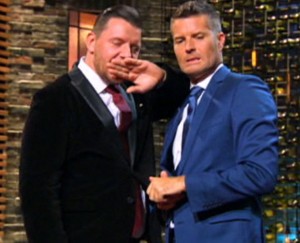 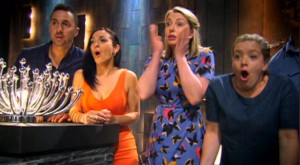 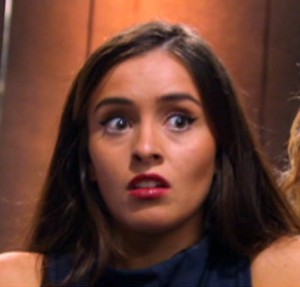 What do you reckon it is? I’ll take a punt on Dad Mike burning himself on a hot pan and dropping it on the floor.