Punk pastry chef Anna Polyviou is back (yay – first female chef this season). The bottom three contestants from the mystery box challenge have just three hours to recreate and 15 minutes to plate up her Mess.
Now that looks a far cry from the Mess I’m used to, which is what you make when your pav cracks.

"MASTERCHEF" secret is out, I'm back on again… It's going to be HUGE… Thanks @masterchefau for having me bk 🤘 pic.twitter.com/nfCpPe3el5 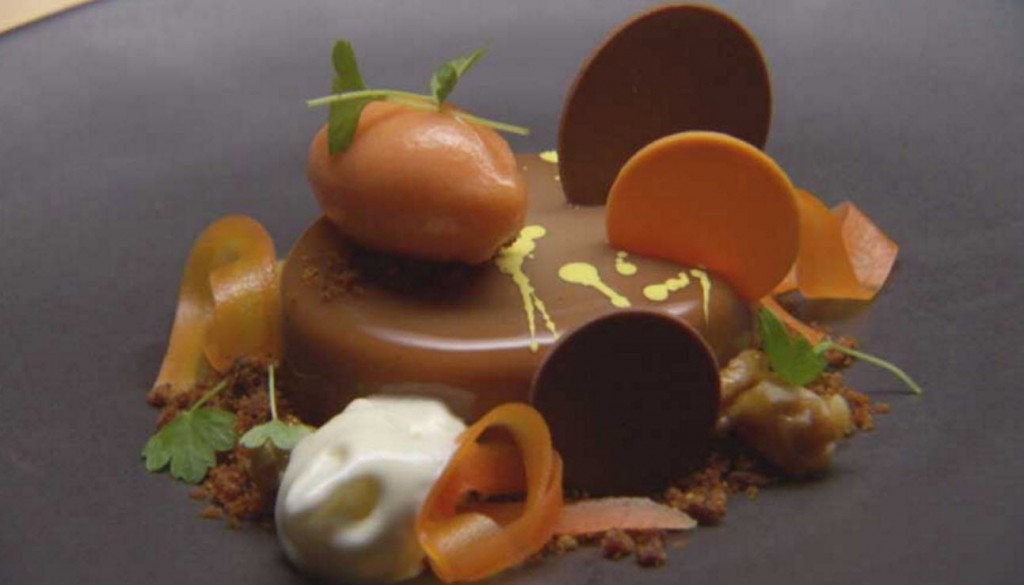 It was Fiona V Rose V Jacqui. As usual, Rose did quite well at following a recipe when the pressure was on (helped by landing in elimination so many bloody times) and was praised by Anna, while Scottish Fiona was sent packing.
****
So it’s Tiny Top Knot Harry, Floppy Fringe Charlie and Pony Tail Nicolette in the firing line but, wisely, Nicolette uses her immunity pin and Elise has to take her place. Elise has never been in the bottom three before but she loves cooking desserts; while we know Charlie tends to rush recipes and make mistakes and Harry’s strength is savoury.
Anna arrives and reveals her “pink Death Star”, as Harry calls it.

It looks fabulous but to make good on the “Mess” name, she picks it up and smashes it on the bench. How do they serve this in the restaurant? On a massive platter? Otherwise the floor would be covered in coulis. Actually, it’s probably more of an exhibition dish.

And they’re cooking … Elise seems calm but warning bells start ringing the moment we hear Harry say meringue kisses are easy. They’re not as pretty as Elise and Charlie’s.
We’re getting Charlie back story: He wants to open a cafe on the Mornington Cafe with his sister. Do I sense a Charlie redemption here? Has he finally calmed down and found his groove?
Uh oh – Harry’s stuffed up already! He’s realised he’s forgotten to put sugar in his sponge and has to start again.

Elise is doing well, but we get a talking head from Zoe saying Charlie looks to have forgotten to put gelatine in his berry mousse. Nooo!
It’s time to temper the white chocolate and Anna mentioned at the start how tricky this can be. None of the contestants has tempered white chocolate before but at least Anna said the temperatures they need are in the recipe.
It looks like Zoe is the anointed one of talking heads today, as she again points out Charlie is not stirring his white chocolate. So, that back story was because Charlie’s going home.

Ooh, Elise is a pharmacy technician. I guess those skills come in handy when making desserts as attention to detail is crucial. But she’s starting to feel the pressure now and she accidentally boils her mousse. She’s serving it anyway – a tactic that served airline captain Brett well when he cookied up his quail pate in the last elimination.
The red silicone moulds of death are wreaking havoc. Elise can’t pop out her domes (that sounds risque) and someone on the gantry hekofully yells out: “Don’t stress!” A brulee torch does the trick, but the moulds of death strike again for Charlie, due to his forgotten gelatine.
Charlie manages to get his white chocolate dome out nicely but Harry and Elise are having dramas and as Elise pushes on hers cracks appear. Harry starts slamming his mould on the bench and I have to look away. Even Mr Juz, who doesn’t watch cooking shows, glances up from his iPad and says: “I’m stressed out just watching this.”
Come on, Anna – tell them what to do – Australia is on tenterhooks.
Was I wrong – did we get Charlie back story because he is the only one who gets a successful dome? Anna yells at Harry not to blow torch it or it will melt.
Guys, at least get your other elements on the plate so you can serve something. Harry finally gets half a dome out. And then so does Elise! Thank god for that. The white chocolate bra cups are a bit banged up but at least they have something to serve.

Time to taste
Harry is first to plate up his Mess and it looks not too bad. Not as speccy as Anna’s, but pretty darn good. Anna tells him the chocolate looks good. Gaz asks the leading eotional questions and we see Harry’s cocky facade drop as he says he has no job or home to go back to. That and the fact he’s been locked up in the MC house with no access to Tinder. To cheer him up they let him smash his Mess. Geez, I wish Matt had worn his vanilla thickshake suit today. Gaz loves the curd and George says the choc is great. Anna doesn’t like the meringues but he’s done a great job overall.
Elise plates up and her mousse is running and there is a crack in her dome, which she tries to cover up with a choc disc, knowing the judges will still spot it. No tears from Elise. Hers is super splatty, because of the runny mousse. The judges aren’t fuss about the crack and they like the curd. Anna says she’s done well but the mousse is runny.
Charlie plates up but knows his chocolate dome in thick – he’s worried it won’t smash. At least he seems calmer about his lot in life. Chuck it, Chuck! He does and … ad break. We get serious looks from the judges and it did smash, so, total beat up by the editing suite. The judges like the flavours but note the chocolate is really thick and the curd is very soft (because he forgot the gelatine).

The judges’ verdict
Harry’s version was the best so we know it has to be Charlie. Poor Charlie – you seem lovely but the peculiar pressure of the MC kitchen was not for you. Anna gives him an uplifting chat and offers him work experience in her kitchen. So, when is Channel 10 giving Anna her own Chopped-style show? She has that theatrical vibe.

Epilogue
Charlie has completed work experience at Burch and Purchese. He is currently working at East – Bar and Dining in Mount Martha. (Working at? Does that mean he’s a waiter? Only three desserts on the menu but it’s close to home for him east) 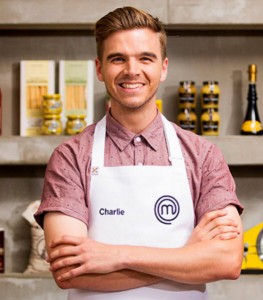 Tomorrow night
It’s a reinvent-the-eclair immunity challenge with Chloe, Brett and my new fave, Trent. Yum! Surely Chloe is the frontrunner, though, with her dessert track record. Will she do some kind of smoked caramel, parfait-filled eclair?