The contestants learn about the Power Apron Week and try to feign excitement. But they are genuinely happy when Luke walks in. His mystery box is revealed and there’s some cool stuff in there. 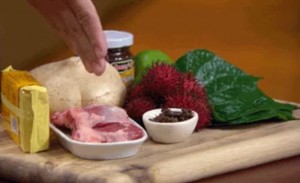 I saw jicama (apparently it’s like a yam or turnip) for the first time a few weeks ago when they did the alphabet name the ingredient challenge, so I hope someone cooks with it. Goat curry is one of my faves, so surely someone will go that route. Topped with deep-fried cricket instead of the usual prawn heads.
Who’s going to remain invisible for this cook? My money’s on Anastasia – the new Elena.
Chloe is making a cricket praline parfait (when is she not making a parfait?). Trent gets to speak – yay! He’s doing goat in a betel leaf with a tamarind caramel. Heather is not wearing her headband. I’m worried she has left the source of her coooking power behind at the MC mansion. She whips out the smoking gun and uses it on the goatm to which she’ll add a tamarind glaze.
Intense Matt goes for broke and tries a goat ceviche. He’s curing the meat in lime, sugar and salt and is not sure if it will work. This is the challenge in which to take risks as no-one’s going home.
Elise is making a caramel cricket parfait. Not cricket wongtongs, Elise? She’s never been tasted in a mystery box and is hoping her caramlised crickets will give her the edge. Gaz forces George to try one and you can see if they weren’t on TV he wouldn’t do it.
Harry – frizzy fringe flying – is making goat skewers wrapped in betel leaves with rambutan jam. He’s deseeded the rambutans and is roasting them. Matt Preston gees him up and tells him the seeds will be poisonous unless they are correctly cooked. Google tells me that, while the seeds are bitter, it’s only folklore they are toxic and that testing has shown they are fine to eat. Roasting should remove the bitterness.
Who we haven’t seen: Anastasia, Elena, Nicolette, Mimi, Brett (we got a few words but have no idea what he’s cooking), Karmen and Zoe.
Gaz is keen on the dishes of Heather, IM, Harry and Elise.
Harry has given up on using the rambutan seeds and Elise has made a sugar coated betel leaf to go with her cricket parfait. “Things that taste good but don’t look good are fine at home,” says IM, but he knows he needs to jazz things up for MC. He adds a fried egg to his dish – perhaps he should have done an egg net instead.

Top three tastings
IM’s citrus-cured goat salad: He’s not happy with his plating. “It looks homely but interesting at the same time,” says George. “Matt, presentation-wise, I like it,” says Luke. “That’s pretty cool.” The judges only have good things to say.
Heather’s smoked and barbecued goat with tamarind glaze: Luke is impressed she grilled the betel leaf, as he’s never done it. She gets thumbs up but they’re not raving as much as for IM’s dish. 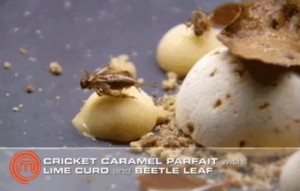 Are crickets on special at Coles this week?

And the winner of the first power apron is …
Elise … darn it – I was barracking for IM. Elise’s dessert did look pretty cool, though. So, what power does she have that will turn out to be a poisoned chalice filled with rambutan seeds?
She gets to choose between “steamed” and “fried”. The ovens will be turned off. Luke is a good salesman for the wonders of frying, and she succumbs to his charms. Everyone will be happy with that.
Instead of looking for the top three, they are looking for the top one, who will get the power apron. Bottom three contestants are up for elimination. Elise gets 90 minutes to cook her dish, while the others have 60. At least the others will have 30 minutes to plan their dishes properly.
Elise is making pan-fried quail with mango harissa, maple goat’s cheese and bacon jus. So, she’ll use up her whole advantage chopping up pesky quail. Over on the sideline Nicolette picks up that Elise is making a jus, which uses involves boiling. But they are only allowed to fry things. The judges wait til she’s done heaps of work before dropping the bomb. This is where the so-called disadvantage has served the other contestants well.
The others start to cook and at least we won’t see any parfaits for this challenge.
Oh my goodness – Anastasia is speaking! She’s making seafood with a fried fennel pesto. And now Karmen finally gets to talk, about her laksa-inspired flatbread wrap. Chloe is making duck breast with sambal and compressed cucumber. It looks like compressing is the new smoking, which is soooo 10 minutes ago.
Elena has been reading my mind and is creating an egg net filled with pork and prawn. Pork served her well last week with the Spanish rice dish that finally got her airtime. Her egg net is green with what I guess is coriander but it’s not quite working.
Zoe plans to do a whole deep-fried baby snapper, even though she’s never done it before: “I’m going to run with it and hope I can cook that dish perfect (sic).”
Harry, who lived in Korea for a while, is making Korean fried chicken.
Brett – now the oldest contestant left in the comp by at least a decade – is making crumbed fish and chips.
With 23 minutes to go, Chloe hasn’t even broken down her duck and Elena is still having egg net drama. Luke gives her some tips. Come on, Elena – you can do it!
Zoe’s snapper is out of the fryer and it does not look great. So she goes and grabs another one. What a waste of fish! Why not switch to prawns or something. Panicking, she chucks it on the hot oil which splashes all over her arm. I’m surprised she didn’t go the desert route and make some kind of crepe with a dry caramel, dry-fried nuts and fruit.
Harry’s Korean fried chicken has been coated in a sticky sauce and it looks delicious. Brett is having soggy chip dramas and Elise feels like she wasted her time. Elena has given up on the eggnets and used her mixture for omelettes instead.
At least when they do the tasting we get to see what everyone else cooked.

Time to taste
Harry’s KFC with assorted side dishes: “I love the flavours,” says Luke. “You’ve transported us somewhere really special,” says Gaz.
Zoe’s snapper: The fish is cooked but her sambal is way too hot. “I was expecting more,” says Luke. She’s definitely bottom three.

Anastasia’s prawns with fried fennel pesto: “I go weak at the knees when I look at fennel,” says George. “I love that dish sooo much.” Gaz thinks the flavours go “boom!”.
Elena’s pork and prawn omelette: “It’s not great for me, I hate to say,” says Gaz of the soggy pancake. Yep, she’s in trouble.
Trent’s prawn and corn fritters with mango salad: “That’s exciting,” says George.
Nicolette’s version of a Vietnamese prawn salad: “Colourful” and “delicious”.
Heather’s nori-wrapped tempura quail: “Quite delicious.”
IM’s buttermilk fried snapper with green papaya salad: The fish is “just so damn good”.
Brett’s fish and chips: Gaz admires his chip-cutting technique. But they’re soggy. The fish is cooked well but the dish did not wow compared to everyone else’s efforts.
Elise’s quail with mango harissa: “You’ve gone from the highs … to just having an absolute brain freeze … I don’t like it.” Luke says she got confused and flustered and it shows in the dish.
Chloe’s duck with pickled, compressed veg and sambal: The judges coo “It’s so pretty” when it arrives. “It looked great and everything worked for me,” says Luke. George: “This is bang up to speed.”
So, we didn’t get to see what Karmen or Mimi made.

The top three
Anastasia, Chloe and Harry. The winner of the power apron is Anastasia. Woo hoo – someone different!

The bottom three
Zoe, Elena and Elise. Fingers crossed Elena will make it through.

Tomorrow night: The bottom three has to create a Ross Lusted dish. Elise probably has the advantage in that she survived the pressure of the Anna’s Mess dessert challenge last week, so she knows a bit about what to expect. The promo shows Elena having a little moment, so not her usual serenely glowing state of being.