It’s Maggie Beer, popping in from the Barossa for her usual MC appearance and to make us want to run out and buy verjuice and pate (actually, her pate IS delicious).

It’s the usual mystery box/invention test deal. Last year the Maggie mystery box contained secateurs and gardening gloves and they had to raid the MC garden. The subsequent invention test resulted in a top three of Jessie (the young SA cook), John (who did many Filipino dishes) and eventual series winner Billie.
****
Here we go with a rolling recap (SA time).

Matt Preston is wearing a cream suit that makes him look like a giant vanilla thickshake. It’s very distracting and makes me wonder how many back-up versions there are, for when he eats food that needs to be slurped.
Maggie Enters and Nose Ring Chloe tears up a little in excitement. The twist today is they are cooking the invention test first. The judges reveal three cloches with three core ingredients chosen by Maggie. The contestants get to pick what they want to use. It’s abalone, silken tofu and lemongrass. Miles should be cheering at this Japanese-inspired selection.

What core ingredient would you pick… Lemongrass, Abalone or Silken Tofu? #MasterChefAU pic.twitter.com/UFHF5WZlZN

Will anyone choose abalone? Ooh, Anastasia and Trent are ballsy and Elena is a late third. And she gets to speak! Only Miles and Zoe pick tofu. So all the people who picked lemongrass only have a teeny chance to get tasted, as obviously they’ll pick one person from each ingredient to try.
Can’t say I’ve tried abalone. Have any TTVers? What does it taste like?

Miles is doing tofu two ways and meat on a stick, based on meals he ate while living in Japan for two years.
Harry is doing a Thai-inspired smoked lobster with coconut lemongrass broth.
Elena speaks again! Her parents owned a dive shop – holy moley – is this back story? She’s making a an abalone and mushroom green tea noodle salad, with gluten-free noodles. Gary responds to her dish description with “good”. He’s such an encouraging chap.
Chloe is doing a savoury lemongrass panna cotta (ABPC!) with cold prawns while Zoe (who should never, ever be team captain again after that Hellenic Republic schemozzle) is making a tofu cheesecake. And yet she’s still adding cream cheese so it’s not much different to a normal cheesecake – plenty of recipes for good vegan tofu cheesecakes out there. At least she decides to add a chilli cherry jelly topping after Vanilla Matt told her she needed to do more.
Back to Harry again. And back to Elena. And back to Miles.
Come on – can’t we at least see what the other abalone pickers are making? Or Intense Matt.
Matt and Maggie put the frighteners on Chloe about her ABPC so she switches it to red curried prawn salad. Boring (by MC standards, anyway). Just do the ABPC anyway, Chloe.
Elena doesn’t eat gluten so she’s making GF noodles but we don’t hear what they’re actually made from, other than green tea. They look brown – buckwheat, maybe?
We get a glimpse of Trent and Elise (I think) doing some creative plating, but who knows what they cooked. It sucks when we already know at least nine people who have no chance of being tasted. No doubt it will be Harry, Zoe and Elena. Predicatble.

Harry’s lemongrass tom kha looks pretty and you just know George is dying to try the lobster head butter. (And what is with George’s ugly black and white bamboo shirt? Is that supposed to match the Japanese ingredients?) The judges love the dish and say he’s kept lemongrass the hero.
Elena’s green tea GF noodle with abalone and mushrooms dish looks pretty and George loves the noodles but they wanted her to serve the dashi broth from the pot, too. She needed the obligatory carafe of soz!
Zoe’s dark chocolate and silken tofu cheesecake with chill cherry jelly looks tasty and Maggie loves the texture. Zoe’s getting the triumphant too-loud music. They love it.
So, a predictable top three and I imagine Harry’s got this one. Oh no, actually it’s Zoe. Look for a tofu cheesecake recipe in Maggie’s next book.
Zoe’s advantage is a big one: She gets to pick all eight ingredients for the mystery box. So, will we see lots of Greek stuff, or lots of dessert things? Or something offaly?

Mystery box time
Zoe reckons the contestants will be surprised. She’s picked simple stuff ricotta, pork mince, thyme, chilli, pancetta, tomatoes, garlic and basil. Is she cooking meatballs? She says it’s a dish she cooks for her husband – oh, she’s married? Have we seen any Zoe back story?
Yes, Zoe is making meatballs with papparedelle. They are very homestyle ingredients are having abalone in the previous challenge.
Everyone’s making pasta, it seems, so we’ll have a return of giant ravioli. Can’t someone at least do ricotta dumpkings. Chloe is not doing pasta. Instead it’s a pancetta fat parfait with a caramel soz (she loves her caramel sauces). But we’re getting voice overs about her hoping she’ll pull it off, so maybe it will fail.
Trent is getting air time! He’s making his own brik pastry for a spring roll wrapper. That’s hard yakka, Trent. Good luck.
Elise is standing out by making dessert. A thyme biscuit with a caramel parfait, which may not set in time.
Harry is doing steamed dim sims which are a take on one of George’s dishes. Risky. (By the way, George charges $10 for four dimmies at his Jimmy Grant’s joints, which I hadn’t heard about until now, but they look more downmarket than his fine dining restaurants jimmy grants.)
Brett doesn’t care everyone is doing pasta; his will be the best. And he’s doing ravioli.
Nicolette is making a ricotta parfait with a chilli salted caramel.She already has an immunity pin so she is making a riskier dish. “It has a weird sort of grainy texture, but I want that in my dish today.” Really? No-one wants grainy texture in their parfait, Nicolette.
Charlie’s fringe is flopping all over his flatbread and he’s already talking about how he doesn’t have his usually ingredients but is making them anyway. So, Charlie for the elimination challenge, then?
Both Elise and Chloe are having trouble getting their anglaise to thicken for their parfaits. Urgh – enough with the parfaits, girls.
Harry gets more air time because he’s using Maggie Beer verjuice in his tomato sauce. And Trent chucked verjuice in the chilli jam to go with his spring rolls.
Still no Intense Matt this episode and Karmen has also fallen off the face of the earth. Charlie is having flatbread dramas and Elise’s frozen dessert is melting before her eyes. Nicolette is having dramas with her grainy parfait, also.
Brett gets more air time for his plump ravioli and his is the only pasta dish getting airtime – not even Zoe has made the edit.

Time to taste
I’m barracking for the little-seen Trent on this one. They look fab and no-one else did anything similar. 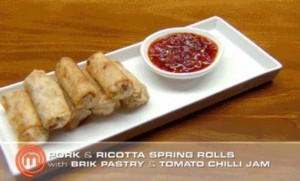 Trent’s pork and ricotta spring rolls with chilli jam: Maggie loves the pastry and Gaz asks Trent to make him a jar of the jam. George says he pushed himself.
Nicolette’s ricotta parfait: Maggie is too polite to say she doesn’t like it. Matt says it’s lucky she has the immunity pin.
Zoe’s meatballs with pappardelle: The pasta is great but that’s all we get.
Heather’s deconstructed smoked tomato tart: They like the soz.
Intense Matt’s pasta with pancetta and smoked ricotta: Maggie would like to eat it at home.
Karmen’s pancetta and ricotta croquettes: Gaz says it’s a crowd pleaser.
Elise’s lopsided caramel parfait: It’s not a total puddle. Gaz likes the parfait texture but Maggie says it needs more flavour.
Harry’s dimmies: With the cockiness that comes with being a 22-year-old bartender, Harry is just dying for the judges to say his dimmies are better than George’s. “I think you’ve used too much verjuice,” says Maggie – words we never thought she’d say. And the other elements suck, too. Stick with your bookies, Harry.
Brett’s ravioli with tomato sauce: Brett calls a spade a spade and you can tell the judges love the dish as they’re eating it. “Yum,” says George. “That’s one of your best dishes that I’ve tasted.” See, you don’t always need a smoking gun or nasturtium leaves to garner praise.
Charlie’s pork rissoles with flatbread: “It just doesn’t look good, mate,” says Matt of the turd-like rissoles. Matt says the bread is dry. Charlie’s definitely bottom three. 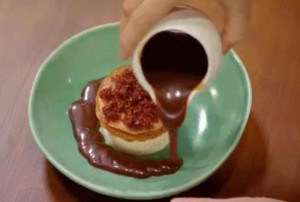 Chloe’s pancetta fat parfait with brik pastry: The judges love the look of it. “That is incredible,” says George. Maggie is in raptures. Matt says she’s an A1 contender.
So we missed Miles, Anastasia, Elena and Mimi’s tasting.

The top three
Chloe, Trent (yay) and Brett. No surprises there. They get to compete for a chance at immunity on Tuesday.

The bottom three
Charlie, Nicolette and Harry. Just when I’m think it’s disappointing only two people will cook, as Nicolette should use her immunity pin, we learn the fourth-placed person will take Nicolette’s place. Way to give Nicolette the guilts, but of course she should play the pin and live to fight another day instead of creating a dessert which has a 74-step recipe.