TV blurb: The losing Greek feast challenge team now face elimination. Contestants who fail the round one blind taste test must then impress the judges with a dish using the ingredient they did not correctly name.

Ooh – blind taste test – this should be fun.

Wow – this is a kind of cool challenge. They have to do a blind taste test of food cut into one-inch cubes, which will really mess with their senses. I like it.
The first four to fail go through to elimination.
In the firing line are Cecilia, Zoe, Anastasia, Intense Matt, Mimi, Heather, Upswept Do Charlie.
IM has to decide whether to play his immunity pin or not and, wisely, he decides to use it. Gaz seems a bit surprised, which is a sign of his regard for Matt’s cooking. However, Matt failed on an identification test last time and you’d kick yourself is you had immunity and never used it. The contestants on the gantry are delighted they don’t have to do it.
George says the cubes are arranged from easy to hard, although when George says “hard” the camera pans to a piece of broccoli.
Cecilia is up first and you can tell from the crunch sound alone it’s an apple. Charlie gets cheddar cheese, Heather cucumber, Zoe chicken, Elise feta, Mimi orange, Anastasia avocado, they skip Cecilia’s second go, Charlie chocolate, Zoe beef, Elise watermelon. It’s up to Mimi for a second guess and it looks like mango but she says nectarine. She knows when George tells her to remove the blindfold that she’s bombed out.
Anastasia chomps on a carrot and it’s round three. Cecilia gets what looks like ham but the challenge is messing with her mind and she says chicken, which someone else already had. Charlie gets eggplant, Heather, pineapple, Zoe tomato, Elise radish, Anastasia cauliflower, Charlie blue cheese (I hope he gets water after this or his tastebuds will be trashed for the next round), Headband Heather says grapefruit but it’s a lemon. Zoe screws up her nose at raw tuna and then presses the cube against her lips to feel the texture, while her fellow contestants giggle at the sight. Elise gets a cube of meat and says veal but it’s lamb.

Round two
So they have 60 minutes to cook a dish featuring the ingredient on which they bombed out and poor Cecilia drew the short straw here: it’s Elise lamb, Heather lemon, Cecilia ham and Mimi mango. All are relatively well rounded cooks who have had one or two glimmers of brilliance.
Cecilia is having another of her brain freezes (at least she has an excuse) and is the last one in the pantry.
Mimi is making mango syrup, jelly and custard. What, no parfait or smoking gun?
Heather is doing lemon calamari with cornflake crumbs. She mentions she wants to start a new career in “cheffing”. I think you mean cooking, Heather.
Elise is doing crumbed lamb cutlets, which seems simple. They’d better be spectacular. But she’s frenching all six bones when really she only needs to do three – what a waste of time.
Fifteen minutes in and Cecilia has not started. She’s making ham croquettes with caprese salad – mmm, tasty. The judges love fried stuff so they should appreciate this.
Gaz and George pop over to Heather’s bench to put doubt in her mind about her accompaniments. Don’t know why she’s not doing a lemon aioli as they love a good mayo. And she hasn’t mentioned a salad to provide relief from the acidity.
We hear Heather say “lemon” a million times – she’s gone lemon crazy.
Elise finally gets her lamb in the oven and only then does Matt wander over to tell her it’s too simple. Info that would have been helpful 40 minutes ago, Matt. Her idea of wow factor is to add caramelised onions cooked in beer. Doesn’t seem that fancy pants.
IM thinks Cecilia is on to a winner with her croquettes. But has she “heroed” the ham enough. Maybe she needs a ham dust to scatter them with?
Oh crumbs – Heather’s crumbs are not sticking to her calamari. She goes the double coat and that works.
Elise realises her crumbed lamb won’t cook in the oven in time so she chucks it in the fry pan.
Matt pops over to remind Cecilia that hot ham balls will wilt salad and that she needs to think about her plating. “Plating has been a shocker in my dishes, in this kitchen,” she tells confessional. Yes, we remember your god awful stuffed parsnip, Cecilia.
Mimi is getting a winner edit with her mango dessert – no sign of problems.
IM is shouting helpful advice from the balconey and tells Elise to taste her sauce. It’s too salty and rubbish but she serves it anyway. So she’s in grave danger. When will they learn – don’t put dodgy elements on the plate! 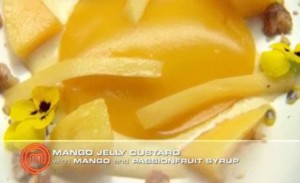 Mimi’s mango: It looks terrific in that bitsy, edible flower kind of way that’s in fashion, with the obligatory mini carafe of soz on the side. “It’s a sophisticated bit of cooking,” says Matt. George loves it so much he licks his thumb.
Heather’s lemon: George divvies up the food and can’t help but do a cheffy smear on each plate with the mayo. Gaz loves the cornflake crumbed calamari but the whole dish is super lemony. 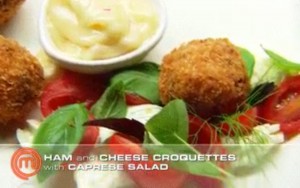 Cecilia’s ham: “It looks prettier than expected,” says Gaz, master of the backhanded compliment. It’s at this point I notice George is wearing a blue suit with a faint tartan pattern – did they get one of Matt’s suits retailored for him? The judges like the croquettes but think there’s way too little ham.
Elise’s lamb: She’s already kicking herself for deciding to serve the soz. Matt points out this is the first time she’s had to cook for her MC life. She’s served up all six bones. Gaz likes the lamb and pumpkin and George is a fan of the onion. But they hate the salty soz.
Sounds like Cecilia will be going home for not “heroing” the ham and serving lots of cheese.

The verdict
The judges lurrrve Mimi’s mango and say she’s a contender. And, yes, Cecilia is going home. Fair call but she did have the toughest ingredient. 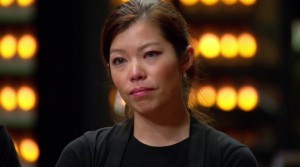 Where is she now? She’s doing work experience at a Melbourne Dessert Bar and hopes to open a cafe where kids are taught to cook.

On Sunday: SA food entrepreneur Maggie Beer is back with a mystery ingredient for an invention test. Is it verjuice?