Who will the judges choux?
Why don’t the just grab a handful of immunity pins and chuck them skyward, like a lolly toss – that’s how easy they’ve been to win this season.
The three best performers from Maggie Beer’s mystery box – Brett, Chloe and Trent – are now vying for immunity. The contestant who produces the best eclair in round one will then cook off against a professional chef.

Here we go … Chloe is back in the tie-dyed shirt but, hey, she’s young and it’s possible I had a very similar one at her age which I made myself. Maybe.

There’s a tempting tower of eclairs on display to clue them in. Matt says they are looking for a next-generation eclair. I reckon you can’t beat a dark chocolate-topped eclair filled with fresh cream, but that’s not very MasterCheffy. Someone’s going to have to pull out the smoking gun or do a weird savoury one.
Chloe’s stoked because she’s made many eclairs, while airline pilot Brett is racking his brain for a choux pastry recipe. He’s doing choc eclairs with pistachio crumb and orange and cardamom filling.
Chloe is making dulce de leche cream cheese eclairs with toasted pecan praline and is chosen to do the “how to make choux” bit to camera. Can she do anything other than caramel?
My new favourite, Trent, is woeful at regurgitating the producers’ lines. Perhaps this is why he disappeared from the edit for so long. “A pin at this stage in the competition is priceless,” he says in a delivery that’s as flat and dry as Charlie’s pita bread from Sunday night. I like Trent even more for his inability to ham it up for the camera, a la Zoe.
He is keeping it simple, making white choc with raspberries, creme pat and macadamias.
It looks like Chloe is using bought dulce de leche – what the heck? Since when are they allowed to use stuff from a jar? It’s not MKR. Next they’ll be grabbing a Lemon Squeeze bottle.
Trent is having choux drama – they are not cooked but he has to assemble them. Everyone else is filling their eclairs. With four minutes to go he finally pulls them out of the oven, cuts them in half and chucks them in the blast chiller for a minute. He’s pushing it to decorate them nicely.
Brett finishes his decorating but feels they are lacking oomph. Miles – of all people – yells from the gantry: “Put some flowers on them!” Off he trots to pick edible pansies and comes back with three flowers for his four eclairs. D’oh! Off he sprints he again.
We’ve been hearing from Chloe how nervous she is, and she gets the shakes while piping her filling. No doubt she’s won.

Brett is grinning from ear to ear as he walks up with his plate of glossy eclairs. The judges are impressed with the prettiness of the dish. Matt loves the choc, cardamom and orange combo. Gaz says the choux is lacking crunch, but Shannon kindly assures him: “I could still eat that whole eclair.”
Chloe puts down her eclairs and George tries to throw her with a sour: “What’s wrong with them?” But she doesn’t fall for it. The judges love her choux and Shannon says it’s almost at French patisserie standard. Matt says the icing is too runny.
Trent’s eclairs look pretty with the raspberries standing along the top. George is surprised they worked and the judges really like the result, but Gaz thinks it’s one dimensional – Shannon suggests some lemon zest would help. But the creamy filling reminds Shannon of the eclairs of his childhood.

In the judging huddle, we hear Matt say Trent should win but George wants Chloe. We don’t get to hear the others speak. As everyone predicted, it’s Chloe. She gets to try for a second immunity pin.

She’s up against Morgan McGlone from Belle’s Hot Chicken (menu here belle’s website) which has outlets in Melbourne and Sydney. He is a specialist in food from America’s south and, yes, I’m judging a book by it’s cover but he loooks like he knows his fried chicken. He has cooked at some top restaurants and, while he has the cheffy arm tatts, at least they are from his Maori heritage.
Chloe gets to pick the theme and it’s tea or coffee. She picks the latter – hooray. No more boring smoking stuff with tea.
While she’s in the pantry, telling Shannon she wants to do semifreddo with a chocolate coffee liqueur sauce, we get a glimpse of a tatt behind her ear. Urgh. But she fits in with the current crop of chefs.
Morgan starts to cook, and he’s doing a red eye sauce, which is made from bacon, coffee and bourbon. He’s serving it with coffee-crusted quail and cauliflower and is cooking the cauli whole by basting it constantly in butter as sautes away. I’ve never seen this technique before but it looks like it will be fantastic. 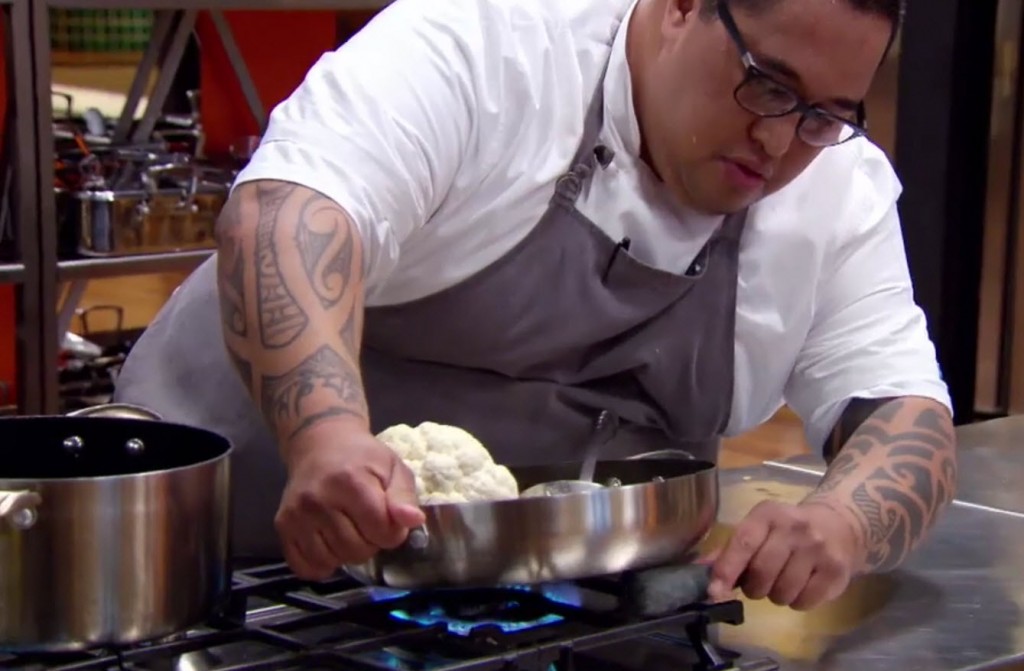 He’ll be hardpressed to finish it in time so I’m not sure why doesn’t just cut the cauli in half. He’s making his coffee sauce but is worried about the bitterness, so it will probably be delicious. He looks pretty darn relaxed and is giving the onlookers a few pointers. He’s fun to watch.
Chloe is making meringue to cover her dessert, bombe style, but she’s overwhipped it. Luckily she has Shannon on hand to point out her mistakes and at least he likes the flavour of her coffee sauce and semifreddo.
Morgan – still calm as, bro – cuts two florets off his cauli and sautes them separately. He plates up and then walks out to the garden to grab nasturtium flowers to garnish.
Chloe isn’t happy with her new meringue but has to use it anyway.

The judges taste
Morgan’s quail and cauli is up first and it’s obvious who made what in this supposed blind tasting. “It’s like something I’ve never taste before,” says George. They love the sauce and buttery cauliflower but Matt thinks the dish needs more sweetness to balance the coffee and cayenne punch.
George gets to do the honours lighting the bombe and it works. “It’s a really good idea, conceptually,” says George. But the meringue is grainy. The sauce and semifreddo flavour were great. Surely they can’t give her a pin for grainy meringue?
The verdict
Gaz is talking up Chloe’s chance to make history by winning double immunity. Yeah, yeah – get on with it, Gaz.
Morgan’s scores: Gaz 8, George 7, Matt 7.
Chloe: Gaz, 6, George, 6, Matt, 6.
Bye, Morgan – please open one of your fried chicken shops in SA so I can taste that cauliflower.

Tomorrow night: Kylie Kwong is back for a Chinese New Year team challenge.