Tonight, Kylie Kwong is back – thankfully just as a guest mentor as Shannon Bennett makes a much better regular mentor.
She’s there for the off-site team challenge for Chinese New Year.

The contestants arrive at Melbourne Chinatown. The sun is out and here’s Kylie to tell them she wants tasty street food. To divvy up the teams, George pulls out a bag (no, not Tim Gunn’s button bag from Project Runway) containing fortune cookies with team colours and captain roles.
Chloe captains yellow and Elise red, which is good as it’s first time for both. Gaz spells out the rules: They must do at least two dishes, with one priced at $7, the rest $5. They have to feed 500 people and have three hours to prep. The team who makes the most money wins, and the cash goes to the Smith Family.

Yellow is Chloe, Harry, Intense Matt, Miles, Zoe, Mimi and Elena.
Red is Elise, Karmen, Heather, Nicolette, Brett, Trent and Anastasia.
Harry pushes yellow team to do a noodle stir fry while Intense Matt suggests pork belly skewers with plum jam – yum!
Red team’s $7 dish is pork loin with noodles and Karmen suggests fried “wongtongs”, according to Elise. They decided to do three dishes, with a sweet sago pudding.
Kylie pops over to yellow to quiz them about their dishes and she just “hmmms” when they say they are using pork belly.
Karmen and her fellow reds have to peel and devein 10kg of prawns for their wongtongs and they are chopping 24kg of pork fillet to marinate for their cold pork noodle dish. Luckily it looks to be a hot day. Nicolette is working on the mango coconut sago pudding by herself.
Captain Chloe has been around George too much: “Gice, we’ve really got to keep motoring, yeah?” Kylie is worried about Harry wanting to serve his hot noodles to order, given the crowd they are expecting. Chloe wants to switch to a cold salad but Harry does not want to back down. Dude – Kylie Kwong told you that you needed to change it and she knows her stuff. Luckily Elena is the voice of reason and says they can do basicaly the same dish cold and just punch up the flavours. Harry seems to listen to her.
Oh god – Elise said wongtong again. Karmen, you need to tell her! Karmen is conducting a dumpling-filling masterclass. It’s labour intensive – perhaps they should have done steamed pork buns instead.
Over at yellow, Kylie is happy with Miles’s master stock. Good one, Miles. Elena is making the chilli plum sauce for the pork skewers in a massive pot.
Nicolette is freaking out over doing dessert by herself in what seems a precursor to her stuffing up her calculations.

Gaz and Kylie give reds a talking to about portion control and tell them they need to get their maths right. Brett and Trent realise winging it was a mistake and they only have half the pork they need. Oopsie! I’d be grabbing some packets of tofu if that was an option. Instead they motor through some extra chopping. Anastasia – in a rare appearance – is choking everyone with the fumes from her chilli sauce. Zoe has cooked beef for the reds’ noodle salad and it’s “cooked perfect”. Taking grammar cues from George.

Red team has fried a tonne of dumplings in advance and popped them in the oven to keep warm. Please don’t let there be a problem with the oven so they burn! Food is flying out of the stalls but yellows are worried about their choice to only do two dishes.

The judges taste
Red team: The “Wongtongs” are a bit dry due to being in the oven but they love the chilli sauce. The pork, xo and noodle salad is “moreish”, says Kylie. 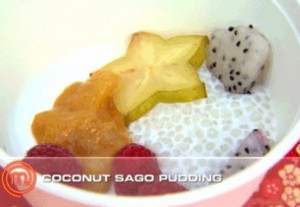 The sago pudding is light, fresh and not too sweet, Kylie says. George gives Nicolette huge props for her solo effort on the dessert. The judges say the extra dish was a smart business decision.
Yellow team: Kylie loves the look of the pork skewers and plum jam. They start with the beef noodle salad (that was meant to be a hot dish originally) and the meat is tender but there’s not enough dressing. “We can taste the friction there,” says Kylie. Luckily she loves the pork skewers.
With half an hour to go, the yellows run out of customers, while reds have a huge line.
They decide to add a quick dish. Harry thinks on his feet and skewers whole prawns to grill on the hot plate sprinkled with szechuan pepper and brushed with the master stock they already have. People love prawns and these are monsters, so it’s a good move. They must be wishing they did this from the start as it’s probably too little, too late.
Seeing the prawns draw away their customers, Elise sends Brett out to spruik with his best bellow.
Both teams start taking trays out to the crowd. With firecrackers going off and contestants “wooh-ing” it’s a louder affair than one of Preston’s suits.

So, who won?
Together, the teams raised more than $6000 for charity.
Yellow made $2774, red made $3285. Preston tells Nicolette her dessert was $785 worth of that win, while the prawns helped yellow at least close the gap.

Well done teams – a great effort for a worthy cause! #MasterChefAU pic.twitter.com/lLfgaWEiTE

So, tomorrow night the yellow team contestants don their black gear for a lucky dip for protein and cuisine. Chloe will no doubt play her immunity pin. We see Gaz having what should really be a private moment with one dish – “Oh. My. God ” – he utters. If it’s the dish they showed with prawn heady things on it I’m guessing it belongs to Intense Matt.