The MasterChef Australia competition travels to California for the week. With just a map in hand the contestants must track down the mystery box ingredients from local San Francisco produce shops.

Don’t forget to vote in the new poll for MasterChef final three.
According to Wikipedia (so it must be true), this is the rundown for the last few weeks of the show: 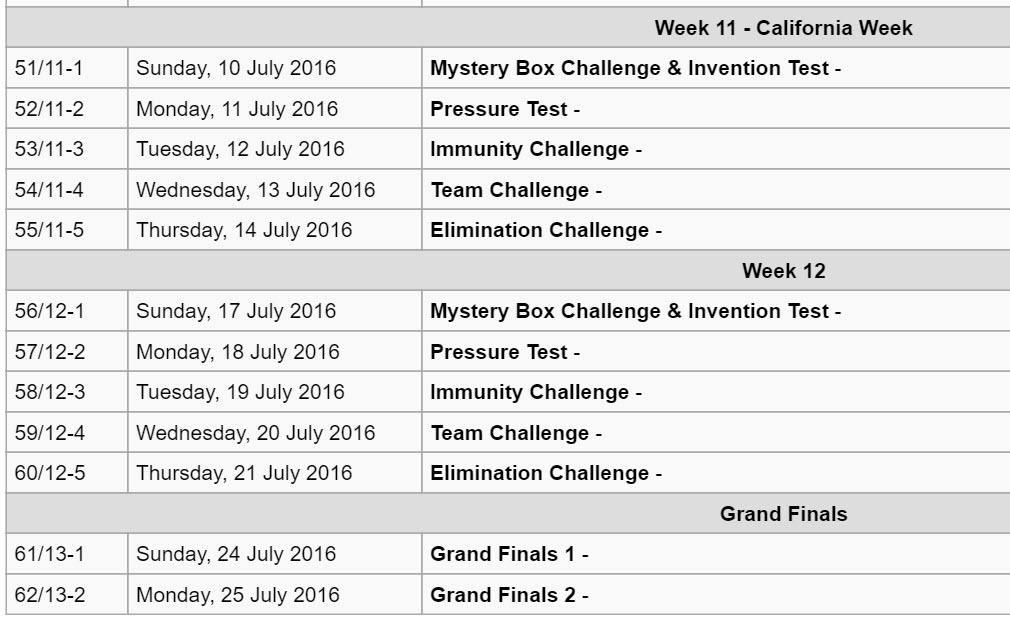 We start with the Qantas plug with Elise and Trent living it up in business class – the reward for having won the last challenge. No footage of the others crammed into cattle class.
All of a sudden they are strolling on a clifftop past Alcatraz. “It’s an absolutely mint day,” says Intense Matt.
George is looking extra stubbly today but Matt Preston is wearing a new cream blazer and waistcoat combo.
They learn today is a mystery box challenge, with each person contributing one item of local produce they buy somewhere in San Francisco. Harry and Brett end up at a fishmonger scoffing down calamari, oysters and crab. Trent and Elise stumble upon a farmers market – no way did a producer tell them to head there. Trent goes for citrus while Elise finds a dreadlocked farmer to sell her vegies. She wants to choose a veg that has multiple uses. No doubt it will be beetroot.
IM ends up in a fancy chocolate shop where they wrap they blocks of chocolate for you and he’s right – no-one would have picked him to choose bacon. Glowing Elena is sent more to a deli type place and is sniffing around the fennel pollen – will she pick it? No Mimi airtime.
They head back to the outdoor MasterChef kitchen, with views of the Golden gate bridge.
The mystery box contains: Mimi – beef shortribs, GE – fennel pollen, Brett – fennel goat’s cheese, Harry – crab, IM – 100 per cent Ecuadorean choc, Trent – tangelos and Elise – golden beetroot. They have 60 minutes and the usual staples of butter, flour etc.
IM is planning to do Korean short ribs with roasted beets, tangelo and beet relish with grated choc, served on flatbread.
Trent is doing a dessert of smoked choc mousse with tangelo granita. Ooh, fancy. Trent is really getting into smoking stuff. But he’s having drama melting the choc as it’s 100 per cent cacao. Luckily he fixes it by folding some smoked cream through it.
Elise is, of course, doing dessert: a choc brownie with a golden beet and tangelo sorbet.
Mimi is grilling her shortribs and serving them with beetroot and a fennel cracker.
Harry is making what he calls crab benedict while GE is making a crab and beetroot salad with the veg done several ways, including a beetroot puree with fennel pollen.
Brett is doing fennel pollen ravioli (it’s a while since we’ve had ravioli on the show, after the initial glut of them) stuffed with goat’s cheese.
IM is in his element cooking street food and we get talking head reiterating his food truck dream. He’s getting heaps of airtime so could well be winning this challenge.
Now Elise is having the same choc dramas as Trent and she’s using silicon moulds, but the red moulds of death obviously weren’t tucked into the Qantas jet cargo hold. Elise’s brownies are a bust and she’s trying to hold back the tears in front of a crowd of tourists. “It looks like absolutely crap,” she says in her usual blunt manner. At least George comes over to put an arm around her and give her a pep talk. She gets back on track and plans a few last-minute elements to bulk out her dish.
Trent adds a microwave sponge to his dish as an afterthought, even though he thinks it’s too dense.
Again, Mimi has disappeared from the edit. And Harry didn’t get much time.

Yellow mellow? We don't think so! It looks like a dish that's hard to beet. #MasterChefAU pic.twitter.com/Hyi3vd358T

GE’s crab and beet salad: George says there is a definite “look” to her food. Gaz says it’s clean and fresh. “I love it,” says George.

Elise’s beet and tangelo sorbet with fennel and citrus crumb: Gaz tells her it looks fine but she’s teary anyway. He likes the sorbet. “Show everyone here in America how good you are,” George tells her.

Trent’s smoky choc mousse with tangelo granita: You can tell from the edit they are going to hate the sponge. George loves the smoked mousse. But Matt says the sponge is “bleagh”. Gaz says he’s worried for him: “You haven’t found your identity yet in the competition.”
Mimi’s beef with crackers and beetroot: She gets a few words about it being tasty.
Brett’s ravioli: The cheese dominates the crab. It is, however, delish.

We love this crab twist on the classic egg benedict. #MasterChefAU pic.twitter.com/ml4s11e7pd

IM’s beef ribs in flatbread: He’s worried it’s street food and not fancy enough. They are so going to love it. And, yes, they love the colours and he gets the tinkly piano. Thumbs up from Gaz: “The hairs on the back of my head just went ‘ping’.” George takes the leftovers out to the crowd to try.

The winner is …
Yep, it’s IM, which was bleedingly obvious from about eight minutes in. Next up is a parade of farmers walking in carrying giant baskets of local produce. IM’s advantage is to pick one ingredient to be the challenge “hero” and he goes the beef. Brett will be happy. They can use any of the local produce, plus staples, and have 60 minutes.
If they win this one they get fast-tracked to the final challenge of San Fran week.

Elena is making a borscht-inspired sauce, using red cabbage and betroot, calling on her Ukrainian heritage. Matt is respecting the produce by not cooking it, for a carpaccio. Trent is going back to the hearty rustic cooking that is more his style, doing steak, mushies and creamy kale.
Elise wishes she was doing dessert but sucks it up to cook steak with smoked leek, pickled onions and jus.
For once, the judges aren’t thrilled with GE’s dish and look disdainfully at her soz of beetroot and beef bones. “I think you’re just making it mucky and dirty,” says Gaz. “It looks like a witches’ brew.” Ouch.
Harry is the first one to pull out the sous vide machine, so his steak will be perfectly cooked. Brett is doing the caveman rib eye on the bone with a smoked parsnip puree, which we’ve seen a few times.
Mimi is going with a walnut theme, crusting her rib eye with it and serving it with a walnut pesto and walnut butter.
IM makes parsnip chips to go with his raw beef but needs to trick it up some more.
Mimi pulls her T-rex haunch from the oven and reckons she’s overcooked it. And, yes, it’s no longer mooing.
IM is adding some sauteed mushies and a smoked, confit egg yolk to his dish. Trent is happy with his self-described “caveman food”.
Elise is doing her dessert-style plating for her dish and you know the judges will adore it. She’s getting the underdog comeback edit.
Mimi and Brett aren’t in with a chance – they haven’t had enough airtime, and Harry isn’t far behind.

Elise’s steak with smoked leeks: The pretty plating gets a “woah”. Gaz says she has a great chance of getting into finals week. Matt loved the soz and the balance of the elements. George tells her she needs to embrace her savoury side.

Trent’s caveman food: “Everything taste as it should do,” says Matt. The judges are happy he’s “cooking from the heart”. Meanwhile, on the sidelines the tourists are shivering in their hoodies while our contestants are stuck in their T-shirts for continuity.
GE’s teak and veg with borscht-inspired soz: Gaz actually loves the soz but thinks it doesn’t go with beef. Matt thinks it would suit duck or pork more.
Harry’s sous vide steak with mushies and onion soz: They like it.
Brett’s rib eye with pickled beetroot and smoked parsnip puree: Gaz loves the puree.
Mimi’s walnut beef: Night has fallen by the time Mimi’s dish is tasted. Poor thing looks nervous and cold. Gaz thinks it’s not as overcooked as she feared. It’s delish. Matt likes the walnut theme.

IM’s carpaccio with smoked egg yolk: Again, the edit is doing the “it’s a risk thing” to make you think it will be a disaster. Gaz says the dish shows confidence and maturity in looks alone. George says he respected the produce. Matt says the yolk “derailed” the dish slightly.

The winner …
..and the person who will be fast-tracked to the end-of-the-week challenge is out of Elise (and George gives her a loud “yes” – and not a “yes, George” yes) and Trent. And Trent gets it! Good one, Trent. “You could seriously win this competition,” George tells him. Much as I love Trent, at this stage, that would be a bit of a surprise, as the edit has painted him as more of a steady cook than a risk taker.

Now, please let them put some jackets on and go back to the hotel for hot showers.

Tomorrow night
They have to replicate the dishes of a Domenique Crenn, who’s won “best female chef in the world” awards. Yay – a female chef who’s not Kylie Kwong on the show. She’s so fancy that when you go to the website for one of her restaurants and click on “menu” you just get a poem. George would love it. But maybe not so much vegetarians wondering if there are any meat-free dishes.