OMG, it's the first date card! Who's the lucky girl going to be? #TheBachelorAU pic.twitter.com/LNWKeAxkBp

Presumably the ones who didn’t get airtime last night are the sane ones. Here’s a name refresher for you (but of course Natalie and Aimee are goneski and Vintaea bailed). So we didn’t really see Sophie, Mia, Tolyna, Faith and just glimpses of Kiki and Laura. 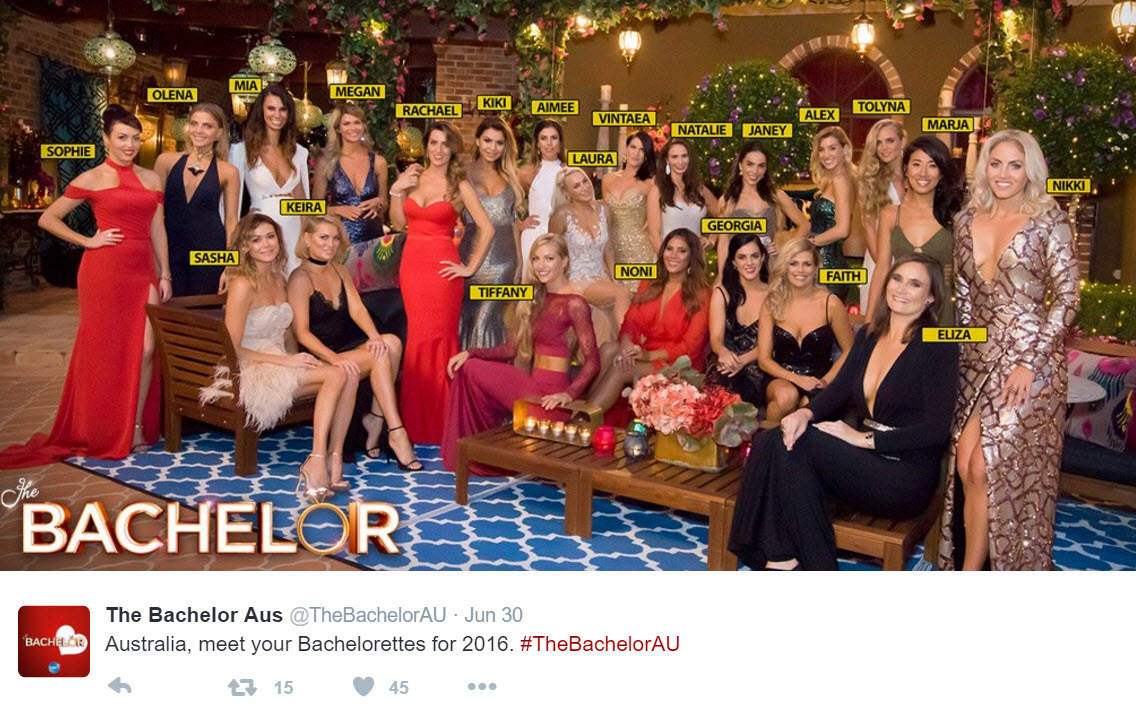 There’s a bit on Swear Bear Vintaea who obviously never watched the show before here
Again, Rosie from Mamamia does the best Bachelor recaps – they are usually posted soon after the show ends at mamamia
It’s day 2 (more like day 5) and the girls are hanging around the house in their casual resort gear and most look so much better without all the spack filler and sequins.
Osher drops off the date cards and it’s WA girl Nikki of the white hair (whom we met first in the premiere had the super high split). The others are totes jelly, especially when Richie turns up in a helicopter to pick her up – Channel 10 are blowing the budget early. How are they going to offered to pay their candle bill?
As they fly near the Sydney Harbour Bridge Nikki professes a fear of heights, so that will be exploited later in the show. The chopper drops them off at a secluded beach and then it’s into a row boat for a getting-to-know you convo. And just to remind us Richie is a true blue Aussie, he utters “crikey!” at one point.

Back at the mansion the girls are chilling outside when Kiki appears with a date card, revealing the names Sasha, (Snickers Faux Villain Keira: “She’ll be hilarious on a group date. Really loud – she’ll annoy the other girls. Heh, heh.”) Tolyna, Faith (wow – she is still wearing a lot of makeup and favours the American cheerleader look), artist Georgia, talentless singer Eliza, white rose holder Alex, another white haired girl called Laura, Kiki, former athlete Mia and Keira. Upon this, Keira utters what looks to be an “urgh” and looks like she just ate a dirty street pie. “I don’t like it,” she says at the thought of having to share the limelight. The dateless ones aren’t pleased with her reaction.
Under-the-radar villain Rachael aka Regina George tells the camera: “We’re here to date him – we’re not here to sit back and just chill out and get a tan in the backyard. I suppose she did really want a one-on-one date but we can’t always get what we want in life.”

On the first date, Richie and Nikki are having a dip in the ocean and pretending to splash each other. Nikki looks so much better with her white blonde hair all wet and tousled. The producers make poor Richie open up an already de-husked coconut with a machete for reasons I don’t understand. Real estate agent Nikki spills she was engaged to a guy she was with for 12 years. So, she’s 28 and they broke up a year ago, so she must have been 15 when they got together. She tells Richie she’s never been on a real date before. He seems to really like her, so out comes the rose and …

Back at the mansion the girls have been gathered to await Nikki’s return. Rachael thinks they won’t have kissed. Poor, deluded Rachael. Nikki says she just gave him a peck.

Nine girls arrive for the group date and it looks like they stopped at the tanning salon on the way because everyone but Eliza has Oompa Loompa-coloured legs. There’s a lot of cut-off denim and biker jackets. The girls are split into smaller groups for a retro-style photo shoot and Alex is the only one who doesn’t have to share her shoot with another girl. Keira and Russian Sasha are teamed up for a milkshake shoot.

Keira and Richie will be sharing a milkshake, but Sasha won't be far away! #TheBachelorAU pic.twitter.com/OzsSyHXiXC

We keep hearing about what a big character Kiki is but we haven’t seen it until now, when she walks out rocking her her 1950s leopard print swimsuit like a Playboy bunny.

"There are so many beautiful girls, especially Kiki over there" – Faith #TheBachelorAU pic.twitter.com/JXSzC7AFZX

Richie looks like he got a bit sunburnt on the beach date and Faith proves to be gormless yet flirtatious, comparing her modelling style to that of a potato.
Sasha works hard to ruin Keira’s photoshoot and Keira is rather meek about it – and obviously rattled.
On the next shoot Eliza is loving the dance shoot, pulling out all her dance moves. The other girls on the shoot are dying to get some time with Richie but no one wants to tackle Eliza to the grand to do it.
For the final shoot Richie is dressed like a T-bird and he and Alex get to sit in a gorgeous red Cadillac. Afterwards Richie says he got a few butterflies: “I was like: Be smooth, Richie, be smooth.”
The other girls come out to watch them giggling at each other. Sasha drily says: “Imagine how pretty their babies will be.”

The photographer makes them pretend to kiss while Keira provides sarcastic commentary just metres away.

Here we go again, showing how cool Richie is by having him rock up on a motorbike for another date. “Oh my god he’s so bad boy,” purrs Georgia. He’s there to pick up Olena the mysterious Ukrainian. She’s a 23-year-old make-up artist who has had a string of disastrous dates. “We have nothing to talk about or he sets my hair on fire … that’s another story,” she tells the camera.

They go for a ride and she asks him some not-so-superficial questions about his family and future kids, fearful she won’t get another chance. He gives the usual “kids, eventually” answer.
Richie takes her back to his bachie pad.
“That’s my sleeping quarters – wait to you see that,” he tells her. Cue both of them cracking up. They go for a swim in one of his many pools even though it looks like they are freezing. She’s luring him in with her mysterious eyes again. He says he has another surprise for her but it’s not a rose: it’s a figure-hugging red dress that she puts on and rocks – the other girls are going to die.

“I feel like you challenge me a little but, which is great,” he tells her, and hands her a rose.

Back at the mansion the girls have started drinking already and there are dress splits galore. Nikki from the first date has a full-one J-Lo plunging neckline green dress on but it’s too short.
Richie takes Nikki off for a chat but then Alex appears clutching the white rose, looking mischievous. Some of the girls are confused as to the white rose’s power. “It’s like an unlimited packet of Tim Tams – it never stops,” Kiki succinctly explains to Georgia, who may be too young to get the reference to the genie ad.
At least Alex waits til he finishes his chat before revealing the rose, and he whisks her off to his dungeon, which is stuffed full of cushions, candles and Moroccan lamps. They share a passion for dirt bikes and realises their relationship will never work because he barracks for West Coast and she’s a Collingwood girl (carn the Pies!).
Keira is super cranky about the white rose, whereas Megan the diving chick sensibly says they would all have done the same.
Alex finally gets to have an in-depth talk with Richie about her son. “I feel just on CLoud Nine and nothing could dampen that feeling,” she says after their chat. And then she sits on a couch near Keira.
“You disappointed me personally,” Keira tells her. “I’ve said it behind your back and I’m telling it to your face.”
Alex doesn’t seem rattled: “I’m going to go to sleep tonight knowing that I’m a good person.” By this point a few of the girls have snuck away, over all the drama. And it just escalates from there.
Finally, one of the other girls encourages Alex to walk away, depriving us of the chance for a glass of wine to be thrown of someone. Can we hurry up already with the rose ceremony>

Oh god, Nikki’s green dress is just so wrong. Either cover up the chest or the legs – don’t flash both. God, Tiffany aka plank girl looks totally different to last night, as does Sophie the Mary Louise Parker lookalike, who gets her first bit of airtime, so she’s a goner. Oh – actually, she’s safe, so it’s white hair Laura and former athlete Mia who are goneski, off to watch Osher’s Australian Idol clips.

Later in the season
We get a lengthy montage of clips from upcoming episodes and it looks like Keira is around for a while as we see her in various outfits. And it looks like Richie does lots of pashing. I didn’t want to watch it too closely as it seemed to give a lot away.

And here’s a still from early in the episode.

Megan would rather eat Nutella from a jar than get in a chopper with Richie.