Well, here we go again. It seems like just yesterday Guy Bachie Sam was snogging Snez and Richie was on an old person date with Girl Bachie Sam …
Richie the rope access technician is back as The Bachelor and, supposedly, he also found love thanks to the series.

Australia, we would like to cordially invite you to the premiere this Wednesday on TEN. 🌹 #TheBachelorAU pic.twitter.com/gqqJCt1gyi

Offspring fans won’t be happy that Nina has been bumped to a later timeslot but Channel 10 knows they will tune in anyway, so is hoping a few will be caught in the Bachie trap.
How many minutes in will it be before we spot our first loony?
Honestly, gice, Rosie Waterland does best Bachie recaps going (you can read them at Mamamia here or on her Facebook page – and she’s much naughtier than me), but since this is the premiere I’m giving it a crack anyway. Plus I’ve roped in Mr Juz to watch with me.
RECAP BEGINS
My recording catches the last few minutes of The Project and Richie is on, spruiking his show with self-depreciating humour.
“I’m surprised I’m wearing a shirt right now,” he tells The Project panellists. And follows it up with a shout out to some mates who are battling cancer. I do like Richie.
We start with Osher walking through the grounds of the Bachie mansion and the number of fairy lights there could be the reason South Australia is having trouble getting the power supply it needs from the east coast. He reminds us Bachie Sam found true love last year with Snezana.
Mr Juz: Oh, that’s right – Schnitzel.
Me: They actually called her Parmigiana. (Then I have to explain to him there was a girl Sam on the Bachelorette and a boy Sam on the Bachelor, because his brain is about to explode.)
So, less than two minutes in Richie already has his shirt off. We’re reminded he’s 30 and a rope access technician on an oil rig. We get flashbacks to the Sam Frost season – I did love that episode where they dressed up as oldies – and there’s a bit of Richie looking sad. But then he’s riding a motorbike and everything’s fine again and he loves his mum and his sister, as shown in some super awkward scenes of them pretending to carry out normal life at home, while coincidentally dressed in their best outfits.
The same sound techs who score MasterChef must do Bachie as there is a lot of very loud music.

Here come the girls
Megan is 27, rides a skateboard and dives. They’re setting her up as a bit of a fave.
Noni is 25 and has Balinese heritage. She’s a swimwear designer and I like her (despite the dreadful bacon tattoo because she’s the one from promo who gives Richie bacon roses and says “Don’t go bacon my heart”. Surely a bloke whose fave phrase is “cool bananas” will appreciate the humour.
Marja, 34 (pronounced Marcia) teaches yoga and is from Bondi – of course. Good to see not all the contestants are blonde white chicks.
Children’s entertainer Janey is passionate about rainbows and unicorns.
Mr Juz: She’s a nutter.
Georgia, 24, is an artist and a self-described alpha female. She likes ripped jeans and floppy hats. 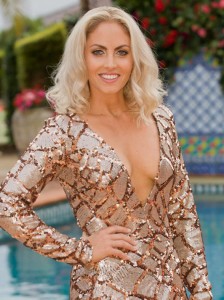 At the mansion, Richie has arrived and meets the first contestant, Nikki. She has a very sparkly, very low cut dress with a super high front split.
Mr Juz: What’s for breakfast, Nikki? (Apparently this makes sens because you can almost see her lunch).
Nikki is happy Richie is the Bachie. 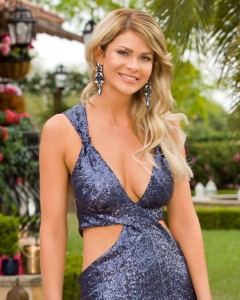 Here comes Megan the skater girl and she’s from WA, so that works in her favour.
Mr Juz: She sounds like my dream girl: nature, camping, the ocean. (Says the man who doesn’t like walking on the beach barefoot).
As she walks off Megan whispers to Richie: “You smell good by the way.” After she leaves he exhales: “Ah, turn it up.” 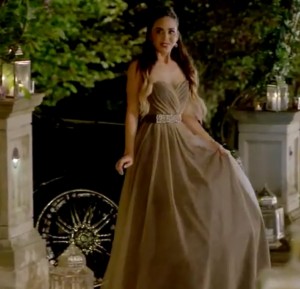 Here comes children’s entertainer Janey in a suitably princess-y dress. She is talking like a little girl and is all breathy. And in her to-camera piece she acts like a little girl who just got a pony.
Mr Juz: I’m embarrassed for her.
She deliberately leaves a glittery stripped shoe behind and it takes Richie forever to twig it’s a deliberate Cinderella moment.

Will Cinderella Janey ever get her shoe back? 👠 #TheBachelorAU pic.twitter.com/wdQyc50YO9

Is she an actress who’s been cast to add drama?
A few girls get the quick edit but Eliza gets the slow, slinky music to match her plunging black dress. She says she wrote a song for him (despite not knowing Richie was the Bachie). She is very off key.
Mr Juz: Fast forward.
She does a high five that ends with a bum slap. Hmmm … Awkward.
Alex, 24, is from the Mornington Peninsula (what’s with all these 24 year olds who are desperate to find love?) and while nervous, has a natural vibe. “I’m bloody nervous,” she tells him, then reads him a poem. Richie seems to like her. 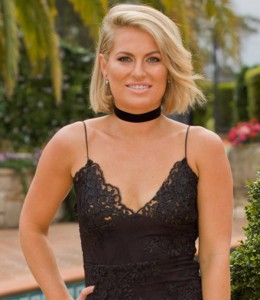 We whip through a few more girls and then in comes Keira, 29, who’s been cast as the villain. “I’ve pretty much got the whole package,” she tells the camera.
Mr Juz: She smoked a joint before she had the interview.
“So, what turns you on Keira,” asks Richie, and they both crack up at the awkwardness of the question. In the mansion they show her
Here’s Noni with her bacon roses. “That was awesome,” he says of her one liner.
Massage therapist Vintaea, 25 is keeping things simple. “I won’t be walking in on my hands or anything.” She greets Richie and asks: “Shitting, yourself? … F—ing great.” Then says she needs to cut back on the swearing. Then in the next to-camera interview says “Thank f—. He’s got good alignment with his teeth. He’s a good size and I’d probably eat that face.”
Mr Juz: We’re definitely watching the Australian version.
Yeah, she’s not going to last. 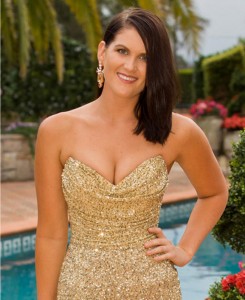 Olena, 23, is a makeup artist and she speaks to him in Ukrainian. “I do like to attack with the eyes,” she says of her dating strategy. It seems to work. “Olena is a total babe. She is very mysterious. Her eyes really draw me in,” says Richie. She has told him a quote in her native language that she will translate later on.
Keira is definitely playing the villain, critiqueing the bad singer and the others’ dresses: “Look at this chick … like, hello, we can see your undies, girl.”
Kiki is another one getting an edit with blunt comments.
That’s the 22 girls introduced.

Inside the mansion
Osher explains the holder of the white rose will get one-on-one time with Richie each episode and some of them look ready to stab each other to get it.
Richie has barely sat down when Noni the Bacon Lover steals him away. Some throw daggers but one girl rightly says: “I feel like we all kind of wish like we were her.” Rachael, who looks a lot like high-maintenance Emily from Sam Wood’s season, is a dab hand at pulling faces watching Richie chat to other girls. Definite Mean Girls territory. 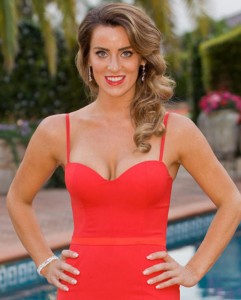 After a while Nikki of the super white hair breaks up the party and she’s also from WA and is close to her family. And now Noni is egging on the Russian (?) girl to steal him.
Richie is apparently surprised the girls are all attacking him for one-on-one time.
Poem reader Alex tells Richie she has a five-year-old son but before he can really react another contestant seagulls in. Is she the new Snez?

Alex reveals her big secret… But how will Richie react? #TheBachelorAU pic.twitter.com/w2fCDPl3xE

Artist Georgia reckons the girls’ behaviour is over the top and very priary schoolish. Villain Keira decides it’s time to try for the white rose. “Just in time!” she yells at him.
My Juz: Is she drunk already?
On the sidelines, Rachael is uttering more catty comments.
Richie actually apologises to her for asking what turns her on earlier. “I would say the white rose would turn me on,” she tells him.
The others send one of the tall blondes (Tiffany) in as a sacrificial lamb to break up the Keira fest, too scared to do it themselves in case Keira whips off her choker and uses it to throttle someone. Keira is looking a bit Bingle to me – I do like that she doesn’t have the crazy hair extensions of some of the others.
“I clearly want friends but at the same time – whatevs,” she tells the other girls.
Eliza is shown acting like a loon – she’s either doing an episode-long improv or she is nuts. Nikki is kind and says she marches to the beat of her own drum. She challenges Richie and the others to a plank-off but then is the first one out. Training administrator Tiffany is doing a great job in the plank department and it pays off – Richie gives her a rose (just the red one).
Regina George’s face drops: “I felt that there was other girls that had a strong connection.”

The editors are loving having Vintaea there so they can bleep out every word: “Oh my god, I’ve never had boobs this big,” she tells the princess. Has she not seen the show before? Perhaps she needs to try Farmer Wants a Wife instead.
Janey is feeling like a loser because Richie hasn’t returned her Cinderalla shoe. Yeah, Janey, there definitely weren’t producers there telling him to string it out.
Eventually skater/surfer girl Megan (a bit of a Hawko lookalike) goes in for a chat and he likes that he’s kicked her shoes off. The mesmerising Ukrainian tries to swoop in but Richie tells her to hold up while he gives Megan a rose.
But he does come back for Olena and gets her to explain her quote.

The girls are getting antsy that he hasn’t given out the white rose. It would be cool if he gave it someone who already had a red rose and said “swapsies”. I reckon he’s going for the single mum. Mr Juz disagrees. It IS Alex, who’s been panicking every since their convo about her being a mum was cut short.
In the background Keira rolls her eyes: “Strategic.” 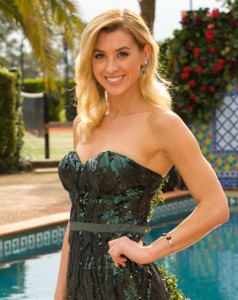 Regina Georges is totes jelly: “I’m not congratulating her either.” Ouch. Yep, the real villain – Keira’s a decoy.

Last season Girl Sam gave the white rose to the guy she ended up with, while Boy Sam gave to Cool Chick Heather.

Rose ceremony time
Osher is so sad and serious because after Richie rejects three chicks he has to take them out the back and make them watch old clips of him is his Andrew G Australian Idol days until they claw their eyes out.
A few unknowns get roses and then Swear Bear Vintaea steps up to Richie before her name is called. “This rose ceremony just got cray-cray,” says cray-cray crooner Eliza. Ooh – she’s going to pike. “I realise this just isn’t for me,” she tells Richie. Good on her for not being in it just to “win” at all costs. The others are stoked to have less competition.
Tiny princess Janey is talking a lot about her ever-after love. Mr Juz: “I’m really worried for her. This could ruin her emotionally.” She gets a rose.
They usually film these premiere episodes over two days and Russian Sasha is obviously pretty hungry as she starts nibbling her rose.
The final three girls are two perfectly pleasant nobodies and Keira, so you know who’s getting it. Producers’ pick?
Aimee and Natalie are gone.

Tomorrow night
There are two solo dates and a retro photo shoot.