Faith gets the date card and as she waits on a dock for Richie the camera operator fixates lovingly on her ample bosom. Richie rocks up in aviator sunnies and a tux, pretending to know how to drive a speedboat and that there’s not a cameraman crouched awkwardly under the dash, filming him.
As affable as ever, Bachie spouts his lines with enthusiasm.

Faith has an extensive knowledge of maritime vehicles. ‘I’ve never been in a … uh … is this a yacht?” she asks. (“What do ya call these, love?” “Rissoles.”)
Luckily Richie seems to enjoy her ditziness.
They meet Dennis the flair bartender, who juggles up some martinis for them , makig me ponder if Tom Cruise still has any of the skills he learnt on the set of Cocktail.

Back at the house, it’s time for the group date card, and it’s singer Eliza, Georgia, Bacon Girl Noni, Sophie, Rachael, mysterious Olena and Villian Keira.
Back on the date Richie and Faith are obviously freezing as they frolick in the pool but luckily playing pool basketball encourages a great deal of skin-on-skin action. Richie loves that Faith is so competitive but can have a laugh as well.
“She dominated,” he says with a straight face.
They have a chat about love, family, morals and stuff.
“Yeah, I really like you,” he tells her, then they go the pash.

Faith's competive streak pays off, she got a kiss from Richie! 😍 #TheBachelorAU pic.twitter.com/YeUlo3fSRc

She returns to the house clutching a rose, telling the others “I don’t kiss and tell”. Faith seems more low maintenance than some of the other girls.

The group date begins and the Keira is relieved to learn it’s not going to be as strenuous as last time’s sumo roller derby date. But Bacon Girl, aged 25, is worried to learn the nature of the date: “I twerk; I don’t do ballroom dancing.” C’mon – don’t make me change your name from Bacon Girl to Miley Cyrus.
Osher reminds us that Richie showed his breakdancing skills in The Bachelorette but, sadly, does not call for a demo. Missed opportunity, Oshie!
Sophie the invisible brunette is getting camera time, so she’s a goner. The girls learn there will be a dance off and the winner gets more time with Bachie. First, they have to pick a partner and stupidly no-one goes near Richie, so Keira swoops in. But apparently she has a sore arm (presumably from the roller derbying) so can’t hold her waltz frame properly. The other girls are appropriately sympathetic. “She just needs to toughen up,” Mean Girl Rachael tells the camera.
After some practising with each other, the girls get to sit to one side like wallflowers, watching longingly as, one by one, they waltz with Richie.
Surprisingly Olena, who carries herself with such poise, is a rubbish dancer. “Watching Olena is hilarious. She is just awkward and unco,” Kaira laughs to camera.

Keira is last to dance and does her moves hamming it up sultrily. She is picked as the winner by the producers – ahem – Richie.
Her prize is a dress that is apparently worth $6500 but looks like Spotlight was having a special on bulk buys of black and white tulle.

She has to walk down the staircase in the giant dress and it’s obvious they didn’t know what to do with her hair. Why not slick it back?
Most of the girls say nice things … Most.
“She just to me doesn’t look like Cinderella – more like the Wicked Witch,” says Mean Girl Rachael to camera. I wonder if Rachael knows she’s the secret villain of the show or if, like Princess Emily last year, she’s oblivious? Keira knows she’s a villain and relishes her role.
Keira and Richie head outside for a horse and carriage ride and Keira does a hilarious royal wave to the others, who head back to the house to prank the other contestants that Keira was sent packing.
Sadly they crack and tell the truth straight away, and speculation turns to whether Keira’s demeanour on the date will be better than usual.
“What – crying, whingeing, complaining?” quips Georgia. But Marja – beautiful, invisible Marja the yoga teacher and actress – sticks up for her: “You’d be surprised – there’s a softer side to Keira and I think that that will come out if Richie’s alone with her.”

Meanwhile, Richie and Keira are dancing in a fairy light-strewn garden to the tune of a string quartet. She’s a graceful dancer.
As usual, the girls have been herded into the kitchen to await the return of the datee, and Keira twirls her gown to reveal she got a rose.

Where did she pull that rose from? @oshergunsberg what tricks have you been teaching her? #TheBachelorAU pic.twitter.com/Qt3cDME3t9

She seems happy with how things went, until singer Eliza speaks.

“Keira, I’m so happy for you, darling,” she starts, then takes her to task in a mild tone for seeming ungrateful to be spending time with Richie earlier. Have I been watching too much UnREAL or did a producer tell Eliza to poke the bear in return for more air time?
It escalates from there and Keira walks out. The others avoid eye contact.

It’s cocktail party time and Sophie is saying she reckons she’s safe, so she’s definitely gone.
Alex is dithering over the white rose while Eliza is getting angsty over not having cleared the air with Keira. Kiki tells her to chill while Noni, forgetting – or not caring – there are 10 cameras on her, readjusts her boobs so they are sitting more comfortable in her strappy dress.
Eliza insists on trying to apologise to Keira despite repeatedly being asked to leave it for another time. OMG – what is Mean Girl Rachael wearing? 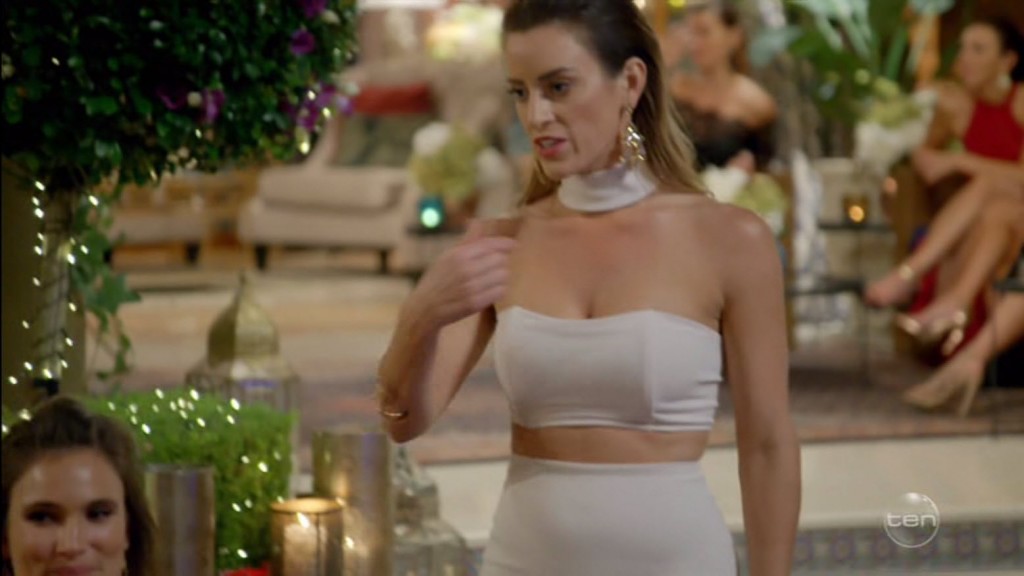 What’s with all the chokers, halter necks and weird scarves this season? Rachael tells Alex she can’t use the white rose until she herself has chatted with Richie. Just kidding – ha ha – but if you do I will totally kill you – just kidding … Sleep with one eye open, Alex.
Alex sheds a little tear as she lets Rachael grab Richie, wistfully waiting for Richie to come to her rather than play the white rose.

Faith and Keira are safe and sound this week. 🌹 #TheBachelor pic.twitter.com/fdg06qccKd

And it’s goodbye to brunettes Sophie and Marja, who seemed kind.
Sophie hugs Richie and whispers: “Look after Nikki.” (Indeed, Nikki was looking a bit shell-shocked at the cocktail party – perhaps she’s just realising he could be pashing a lots of girls). 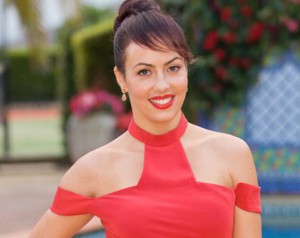 at least you won’t have to wear this dress again, Sophie. 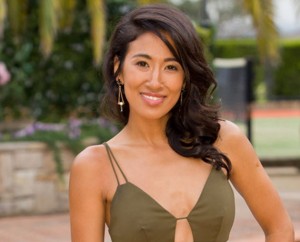 Next week
It looks like Alex finally gets a single date with Richie and she’s so in lurrve and she’s going to lock him in her cellar forever and ever, while the other girls get those fake babies they use to try and scare American teenagers into abstinence. This could be fun.